Counting down to Boston College's return to postseason as we look at the Top 10 BC Bowl games.

Between Dec. 16 and Dec. 31, BC Interruption will be taking a look back at the top 10 bowl games Boston College has appeared in, leading up to the Eagles matchup with Arizona in the AdvoCare V100 'Independence' Bowl.

As we wait and prepare for BC's first bowl game since 2011, it seemed like a good time to look back at the great BC bowl games of the past . Over the next two weeks, we'll recap what we felt were the 10 best of all time. We start tonight in frigid Memphis, TN, where BC took on Notre Dame in the 1983 Liberty Bowl.

After reaching their first bowl game in 40 years in 1982, BC looked to get their first win in a bowl game since the 1941 Sugar Bowl when Jack Bicknell took the Eagles to Memphis to meet Notre Dame in the 25th annual Liberty Bowl. Unfortunately for BC, the Irish and the weather had other ideas. 11 degree temps with wind chills near zero, created a frozen field that was at least partly responsible for three of the two team's combined four PAT kicks failing, as ND held on to defeat BC 19-18.

The Eagles were 9-2 on the season, ranked number 13 in the country and had really captured the imagination of the Boston area behind the play of junior QB Doug Flutie. During the season BC had already defeated Clemson as well as knocking off Penn State for the first time ever before 56,605 at Sullivan Stadium 27-17. They had capped the regular season by defeating Alabama 20-13, in the same venue, drawing over 58,000 on the Friday after Thanksgiving in massive sleet storm.

Notre Dame on the other hand, would limp into the game unranked at just 6-5, after opening the season at #5 in the country, led by Coach Gerry Faust and QB Blair Kiel.

BC jumped out to a quick 6-0 lead just three minutes into the game to cap a 7 play 63 yard drive, with Flutie hitting a diving Brian Brennan (4 catches - 91 yards - 1 TD) at the right pylon for the score. The key play on the drive was a 28 yard strike to little used TE Brendan Murphy to set BC up at the Irish 14. Brian Waldron slipped on the extra point kick, something that would definitely come back to haunt the Eagles.

The Irish would immediately respond with a 16 play 87 yard drive to take a 7-6 lead. Future ND color commentator Alan Pinkett would take it in from the 1 followed by the game's only successful PAT.

The kicking game would once again come back to bite BC early in the 2nd quarter when John Mihalik's punt was blocked by Mike Golic of Mike and Mike in the Morning on ESPN 2 fame. Four plays later, Kiel hit Alvin Miller for a 13 yard TD to put the Irish up 13-6 after the ND PAT was blocked.

The BC offense, a multiple look that relied on a lot of down field passing, struggled in the cold with numerous drops and Notre Dame took advantage. Scoring on their very next possession to take a 19-6 lead.

BC would respond in quick strike fashion, a Flutie to Bob Biestek 42 yard pass setting up a Gerard Phelan 28 yard TD catch and the Eagles were back in business heading into halftime at 19-12 after the two point attempt failed.

The Eagle defense stiffened in the second half holding the Irish scoreless, but only generating a single sustained drive, with Flutie hitting TE Scott Gieselman for a 3 yard TD midway through the fourth quarter. Flutie tried to go the same route for the two point conversion, but the pass, which would have given BC the lead was batted away. 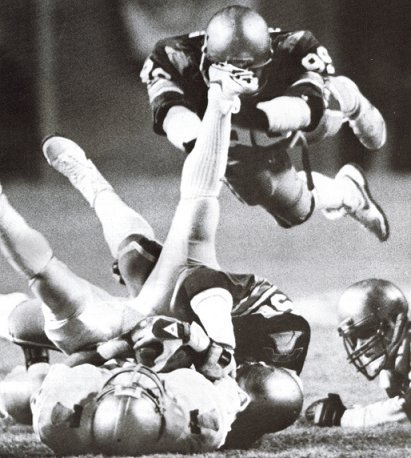 BC would get one final chance and drove to the Notre Dame 35 with 1:08 remaining. An Irish blitz forced an incompletion and ND held on for the one point win.

Despite the loss, Flutie was named the game MVP, despite completing just 16-37 for 287 yards, with the 3 touchdowns and 2 interceptions.

How critical was the kicking game? There were 12 punts combined which averaged just 28 yards and the aforementioned three missed extra points.

Check out the video of the game, it's not complete, but a lot of it! 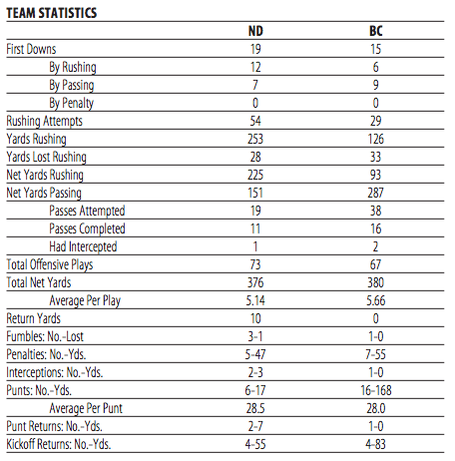