Will BC improve this weekend?

Hopefully this week has given the team and the fanbase a chance to turn the page and move on from the very ugly loss to the Duke Blue Devils. Now, BC has #therivalry coming tomorrow, a battle against the hated Wake Forest Demon Deacons. It's Homecoming Weekend as well, so hopefully the fans will be extra jazzed up for tomorrow's matchup. Let's break down some of the finer points of Saturday's game between the Boston College Eagles and Wake Forest Demon Deacons. Lesssgo.

Will Boston College find any sort of rhythm with either Jeff Smith or Troy Flutie? Can BC open up a passing game that will get Thadd Smith the ball more often? How about the running game, will the Eagles go with more of the power running game with Flutie again, or will they use Smith to try and spread the defense a little more? Will the offensive line continue to improve, or will Wake be able to stack the box and prevent them from opening holes? On the defensive side of the ball, will Wake be able to do anything against this defensive line? The Deacs are close to dead last in sacks allowed, will BC be able to take advantage of that? Wake is the 24th ranked passing offense, will they be able to move the ball on the secondary? How about the kicking game? Colton Lichtenberg, what are you? Also, Sherm Alston, can we take him off punts?

What adaptations did Steve Addazio and Todd Fitch make from last week? Or should we just expect more of the uber conservative dive-dive-dive gameplan again? Can BC flip the field more effectively to give the offense a better chance of putting up points?

What To Drink For #THERIVALRY: 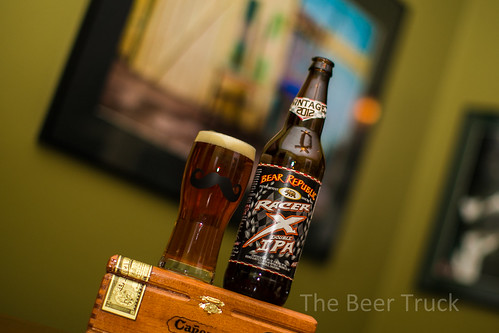 This week's beer was chosen for a few reasons. First of all I picked a beer that is HEAVY on the alcohol (8.3%). This was done intentionally so that you can either drink it at the snails pace of the offense or drink it quickly and get yourself so wrecked that you can actually tolerate BC's offense. If you have tried Racer X IPA you know it's an excellent beer, and the double IPA doesn't disappoint. Rated an almost perfect 95 on Beer Advocate, it's a slight upgrade over last week's Bud Hurricane.

Bonus! BC vs Wake Forest Drinking Game (WARNING DO NOT DO THIS WITH THE BEER OF THE WEEK OR YOU WILL DIE)

BC calls a run play on first down. Drink one.
BC then calls a run play on second down. Drink two.
BC finishes the drive off with a third run play. Drink three
Addazio changes QB in the middle of the drive. Drink one.
When that QB change stalls out a drive. Drink two.
If it actually works? FINISH THE DANG BEER
BC scores a touchdown based on field position created by defense. Drink five
BC scores a touchdown on a methodical, surgical drive. Stone Cold Steve Austin that s***

Let's just start there for this week. Any more drinking and BCI will have a lawsuit on our hands...

I'LL GIVES YOU A HINT. HE IZ A BEECEE LEGEND. NO ITS NOT GERRY YAWK. ....NO ITS NO LUKIE KEECHLY. HOW ABOUT DIS HINT. HE HAZ A HEAVENLY MUSTACHIO? STILLS NO? COME ON ITS FRANK SPAZAMIANI!

Roberto Angini: Uh, no, my name is Roberto Angini, I grew up in the North End. You came into my pizza shop and asked me to talk about BC football. I told you I don't give a s*** about college football, and then you paid me forty dollars to act like I am the former head coach. When you tried to pay me you just gave me a piece of paper with THIS IS FORDY DOLLERS on it.

Baldwin Jr: SHHHH FRANK SPAZIMIANI. TELL US ABOOT YOUR WHAT YOUS BEEN DOIN' IN YOU RETIREDMENT?

Roberto Angini: Look pal, I don't have time to play around. Either you give me the forty bucks you promised me or I'm getting out of here.

Baldwin Jr: LOOKS I HAVE THIS GIANT BOX OF SESAME SEEDED PRETZELS OVER HERE. THERE IS TWO HUNDREDS OF THESE. WILL DAT DO?

Roberto Angini: What the **** am I going to do with sesame seed pretzels. Oh I know what I'm going to do, come here little bird I'm going to take that box of them and shove them up your inflated......

Baldwin Jr: CAW! PEEGEE LANGUAGE ONLY SPAZAMIANI! WELL WUT DO YOUS THINKS OF DA WIVELWEE BETWEEN BEECEE AND BAKED FOREST? DO YOUS HAVE A PREDILICATION SPAZIMIANI?

Robert Angini: Here you stupid bird, I'll give you my prediction. I'm going to take these five fingers and crack them off the side of your head!!!

Baldwin Jr: SO YOU ARE PREDILICTING 5-0? I LIKES THAT PREDILICTION! I'M NOT A STOOPID BYRD SO I'M GOING TO FLY THE HECKS OUT OF HEERE! GO EAGLE HIGH POWERED LINE OFFENSE! CAW CAW!

Eminem- Till I Collapse. This song was picked out with both groups of BC fans in mind. The title itself can work two ways. One, for those who aren't the biggest Steve Addazio fans right now can say that the Eagles are going to run the dive play until they collapse. Get it? And then for those who are still seeing this season with maroon and gold blinders, they can say they are going to believe in this team until they collapse. It's a pretty high energy song, and a solid one for any tailgate. Highly recommend adding this to your playlist for the week, unless you know you hate rap. Which I know many of you do.

It's BC across the board for #therivalry

A.J -  Watching the game in Section B with family and friends, praying that BC starts to put things together. BC 24 Wake 6.

Grant - BC 21 Wake 10. Will be watching in Connecticut, still frustrated at what could have been last week against Duke...

Joe - BC 31 Wake 7. I'll be in the balcony and trying to avoid looking at the in game comments section. Assuming I make it back from West Point.

Dan -  BC 20. Wake Forest 10. I'll be at a family wedding this week avoiding all coverage of the game until I can watch it on DVR.

Laura B -17-7 BC. I'll be following it on my phone from the cat shelter for an hour and watching the rest at my apartment with my own cat #CatLady

Arthur -9-0 Birds. There's no way BC blows this game, right? RIGHT?? Location: The sea of gold in the south end of the field.

AJ comes out on top only missing the final score of the Duke game by 1 point (Take that haters). But Coach is the big winner for the week, jumping Jeff for first place.

Last week BC fans were way off, predicting BC to win and score a bunch of points, but Duke fans were even further off. What do you think will happen this week. Try out the widget.