College football seasons fly by. It only seems like yesterday we were counting down the days until the season kicked off. But here we are at the final home game for the 2015 season. The seniors are going to get their final bow, and hopefully the Eagles can get back into the win column against the N.C. State Wolfpack. Let's get down and dissect this important divisional clash.

1. Limit The Big Mistakes- Last Weekend we saw Boston College make a series of huge blunders that cost the team dearly. Taj-Amir Torres had a punt smack off his face, and Jordan Gowins fell victim of a strip six. Boston College can't give up those type of plays, which really puts the defense against the wall. Play a clean game and BC should stay in this.

2. Mix It Up With Fadule- The freshman walk was certainly not perfect, but he seems to be the best option of the crew right now. He seemed poised enough to make a few throws, especially to his tight ends, and if Addazio can open his playbook up a little I think he can move the ball. Let's see what he can do this week.

3. Pick City- Boston College's defense needs to put the offense in the position to win, plain and simple. When the defense makes big plays (Harold Landry against Louisville, blocked punt against Louisville, Connor Strachan against Virginia Tech) the Eagles stay in the game. BC has tee'd off before on Jacoby Brissett, they are going to need to rattle him again.

Pour Out A Little Liquor For This Season With... 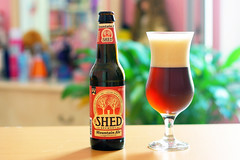 Shed Mountain Ale: As I continue to try and wean myself off IPA's, this has become a staple. Just a nice smooth brown ale, with a rich but not overpowering taste. Brewed in Vermont, you can find this beer at a variety of spots, and it never disappoints. And because it's a Brown Ale the alcohol content is pretty low, so you can enjoy a few of these if you are tailgating or watching a football game. Cheers!

Baldwin Jr: CAW CAW! I IZ SO PREVILIGED TO LETS YOU KNOWS THAT I AM HERE WIT DA MISSY WOLF FROM EN CEE STATE!

Mrs. Wuf: Of course I do silly! You set up this interview!

Mrs. Wuf: Well aren't you going to ask me about the game?

Mrs. Wuf: Between NC State and BC you silly goose!

Baldwin Jr: HOW ABOUTS WE TALK ABOUT GOIN' TO DA NORTHED END AND EATIN' A FOUR COURSE MEAL. NO CHICKENS OF COURSE! CAW!

Mrs. Wuf: What would Mr. Wuf think about that?

Mrs. Wuf: I'm sorry Baldwin, I don't think it will work between us, I'm a wolf, and you're an inflatable Eagle

Baldwin Jr: AWW. I IZ SO SAD. I HAZ BEEN REJECTED! I NEEDS SOME HELP. CAN I HAZ A TAILORED SWIFT SONG TO EAZE DA PAIN. CAW CAW :(

Outkast- Player's Ball. Look when a season is just painful to watch like this one is you just have to pick songs that make you feel good. Basically every song by the Outkast does that for me, but I love love love me the older stuff by Big Boi and Andre 3000. They are such an odd couple, Big Boi with the hustler flow and Andre 3000 out on some distant planet. But it works damn it, it works.

Jeff and Joe are the only two picking the Eagles this week.

Jeff:I think NC State is absolutely set up for a letdown after playing Clemson last week but I also think at the end of the season this won't even appear to be an upset because NC State will struggle down the stretch. I'll be watching at home. BC 21 NCSU 10

A.J.: 21-10 NC State. Watching the final home game from my usual spot in Section B. Not expecting the offense to do much and for there to be a few points scored on "WTF" moments.

Grant: I've been sufficiently beaten down. NCSU 20 BC 7

Dan:I still am hopeful BC has one solid game left in it.l, and I really want to pick them to win this game. But it's too tough to call a win when they haven't proved they can defeat an average ACC team. I'll be watching and enjoying one last Saturday at The Heights until next summer. NC State 20. BC 13.

Coach: Close to Dan, but I am just not BC will either miss an extra point or kick two field goals, so NC State 20 BC 14. NC State has never won at Alumni (0-5) and BC has lost five in a row..so one of the streaks of five has to end. The fact that NC State put up 41 on Clemson, regardless of giving up 56, shows they have enough firepower to outscore the Fighting Fadules.

Anticipated GIF For This Game:

The cream continues to rise to the crop while the rest of the crew wallows in mediocrity. Coach is about to clinch the title.

Is there any enthusiasm left in your Superfan gas tank? Or are you completely checked out at this point? Will you be heading to the game or do you have other plans that don't involve running into a 8 man front adnauseam? Leave your thoughts and predictions in the comments below. Go Eagles!