Who's ready to brawl with Howard University? (Crickets) Yeah!!!!!

Share All sharing options for: Boston College vs. Howard: Final Thoughts And Predictions

Game number one is in the books, it's on to...Howard? How did we get here? Oh that's right, New Mexico State bailed and we failed to get a suitable replacement. Sigh. This is going to be painful. Well at least you have this beautiful final thoughts post and predictions to help you make it through a game that almost literally doesn't matter.

How will Steve Addazio continue to build the offensive playbook with Darius Wade and the young offensive line? Addazio said that he wants to get more wide receivers involved, other than Thadd Smith/Charlie Callinan, who will he call upon? The offensive line looked much better in the second half of the Maine game, will Addazio fix the issues and make them dominant again? Myles Willis is out, how will that effect the running back depth chart? The defensive line dominated Maine, how will they do this weekend? Which player will emerge as the pass rusher? Can the Eagles continue to prevent turnovers and penalties? Will Howard get any yards? How will BC open up the offense to move the ball?

Will BC be able to get 20,000 fans at this game? Will the students show up again? Will the game day experience in the stadium improve? Will flags return? Will BC get the introductions right? Can BC do something that makes this game attractive to the casual fan? How many beers is it going to take to make this game palpable?

What To Drink During A Glorified Scrimmage: 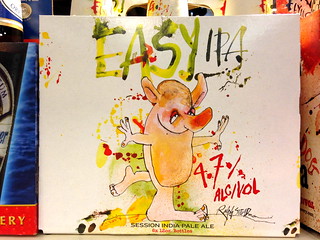 Located 40 minutes north of Washington D.C. (the home of Howard), the Flying Dog Brewery is an interesting brewery that is worth the drink. Interestingly, they apparently are linked with Hunter S. Thompson, and their regular IPA, "Raging Bitch," is a great find if you can pick up at the packie. I chose the session, because honestly at this point regular IPAs are too much at a hot tailgate. Session beers are lighter and have the hops of an IPA but the drinkability of a light beer. If you are going to drink a few beers before a game in the middle of September, got to keep the ABV down, or you're going to be hurting by halftime. Go with the session beer this week, you'll be thankful you did.

BALDWIN JR: CAW CAW! I IZ BACK TO TALK BEECEE FOOTBALL AND HOWARDS! TODAY WE HAZ.....AY JAY WHO DO WE HAS?

AJ: Uhhhh...I couldn't find anyone who has anything to do Howard Football.....so...ummm.....why you don't talk to my dog Harper. She's uh, into college football.... 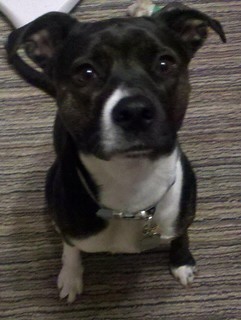 Harper: Holy crap, I'm on my dad's stupid college football blog that follows those stupid BC Eagles. I've been waiting so long for this! Hey stupid talking blow up Eagle. I hate you.

Baldwin Jr: WAIT, WHY DIDS AY JAY GET ME AN INTERVIEWS WITH A DAWG THATS HATES BEECEE?

Harper: Listen dumb bird, you're playing Howard this week. Is that even a school? Do they play football? Do you BC fans get excited for this nonsense? Well clearly not, because AJ's dog was the only guest he could find. And you're stuck with me, I'm a dawg, and we are getting ready for games against South Carolina, 'Bama and Auburn. Silly BC fans and your stupid schedule, and your fans that don't show up to your stupid games.

Baldwin Jr.: OUCHEEE! THAT WAS MEEAN YOU DEVIL DAWG! WELL TALKING DAWG, WHAT IS YOUR FAVORITEST THING ABOUT BEECEE?

Harper: Oh it's so hard to say! I would go with the two hours of tailgating, and the fabulous schedule, the history of winn.........HAHA I CAN'T SAY ANY OF THIS WITH A STRAIGHT FACE. Hold on be right back

BALDWIN JR: OH MY GOOODNESS. YOU TORE UP AJ JAY'S HAT! (Harper snickers) WELL WHAT DO YOU THINK OF COACH DAZ?

Harper: Mark Richt is the best. And your pathetic school can't hold a candle to Nick Chubb and the Dawgs. See what happens when you schedule a team like Howard, you get stuck with me!!! Keep up the good work with the 2016 schedule and you'll see more of Harper in 2016!

BALDWIN JR: OH THAT SOUNDS TERRIBLE. I DONTS KNOWS IF MY LITTLE BIRDDEE BRAINZ CAN TAKES THIS! BRADLEY BATES PLEASE NO MORE HOWARDS I CAN'T TAKES ANYMORE OF THIS.

Harper: Whatever. Hey, silly blow up bird, I love to destroy anything associated with BC. Come over here for a second, let's be friends. 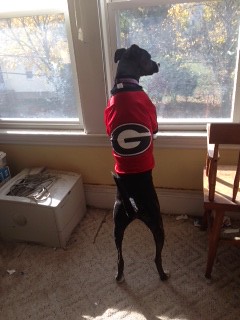 Come back here so that I may taunt you further!

Beastie Boys, Sabotage: Probably one of the best hip hop videos of all time, it just kills me that MCA passed away, and that they will never produce music together again. The motif of this video is so unbelievably awesome, and the song itself gets me revved up; it's perfect tailgating music. And for all of you that hate rap music that just talks about girls, drugs and money, this is the song for you. I have to imagine even the whale pants-iest amongst our readers have heard Sabotage. And if you haven't, listen to it, for a game like Howard you are going to need whatever it takes to get the blood flowing. Maybe this will help.

Here we go, it's all Eagles across the board

Jeff -  Definitely not coming up for the Howard game and waiting to whoop on the Bison. 56-0 Boston College

A.J -  At the game again, thankfully no weddings this weekend. Probably will Periscope again if you want some pre-game fun! 42-3 Boston College

Grant - Doing yeoman's work manning the site, Twitter and Myspace while the majority of the BCI degenerates party at the game. 45-0 Boston College

Joe - A classy drinker, Joe will be at AJ's tailgate again, probably with mimosas and a nice dip. 56-0 Boston College

Dan - Has no room for AJ's stupid snooty beers, he's in one of the garages crushing Busch Lights. 49-3 Boston College

Laura B - Crazy cat lady has dressed up one cat in maroon and gold, and another as a Bison. The first one to find the catnip will be the winner in her mind. 38-7 BC

Arthur - The newest new guy, will be forced to bring post game Hillside sandwiches to AJ and iced cold water for Joe. 28-0 BC

Coach - BC 49 Howard 0. This is the worst team to visit Alumni Stadium (regardless of whatever the final score will be) since the 1983 Morgan State team and perhaps even further back than that.

After Week 1 it's the OG's that have jumped out to the early lead as Jeff and Coach came the closest. While the football heads AJ and Dan, wallow in the basement. SHAME.

Anyone going to the game?  Will you be watching the game at home on ESPN Ocho? Feeling kind of blah for another FCS game? Or watching it somewhere else for a BC meetup at a bar? Make sure to put up your photos on Facebook, or if you want you can email them directly to me at bchysteria at gmail dot com. Please make sure you understand that by emailing them to us you are giving us the right to use your pictures on our posts!

Will BC lay the hammer down on the Black Bears? Or will the offense struggle? What will the outcome be? Leave your predictions in the comments. Go Eagles!