Let's Get It On! The Orange Eagle Trophy Returns

Saturday marks the return of the most prestigious trophy competition in Northeast Athletics. Here's what you need to know as Boston College looks to take back the uniquely-hued badass bird of prey!

Share All sharing options for: Let's Get It On! The Orange Eagle Trophy Returns

As the heat of Summer gives way to Autumn's chill, the giants of Northeast Athletics begin their preparations for the one competition that stands above all others...

BC Interruption and our friends at Troy Nunes is an Absolute Magician are pleased to present to you the lineup for the 2014-2015 Orange Eagle Trophy competition.  Will Syracuse defend its title and retain the trophy, or will Boston College come off the mat and exact sweet revenge on its heated rival?  It's time to find out once and for all!

Let's take it out to the ring and Orange Eagle Trophy Head Referee Mills Lane:

Thank you Mills!  But first, let's get you caught up on the points system and early-season schedule:

Following the completion of the 2013-2014 Trophy Competition, the rules committee made a series of modifications that should make the competition more interesting and representative of head-to-head competition.  The primary changes were as follows:

1) Football and basketball (men's and women's) were categorized as Tier 1 sports, earning up to 12 points per sport for each school

2) All other sports were categorized as Tier 2, earning up to 6 points per sport

4) BC men's hockey and Syracuse men's lacrosse can earn additional bonus points for a school, but only for an NCAA championship.

With the new points system in place, the official 2014-2015 Orange Eagle Trophy schedule is as follows: 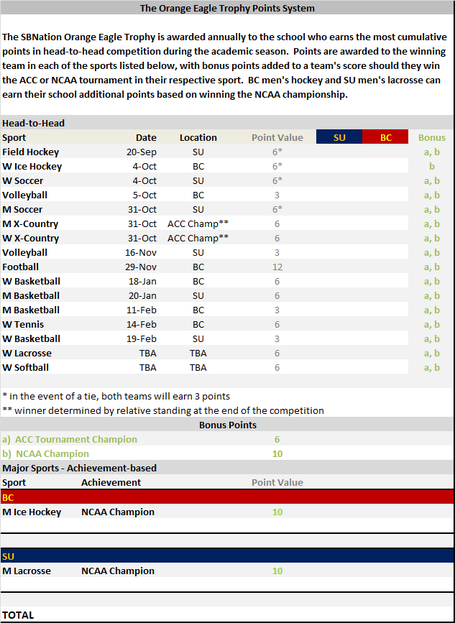 The Competition officially gets underway when the #15 Ranked BC field hockey team (5-1, 0-0 ACC) visits Syracuse to take on the #5 Ranked Orange (6-1, 0-1 ACC) in what promises to be an entertaining and highly-competitive affair.  The Eagles are fresh off a dramatic double-overtime, double-shootout victory over #2 Ranked UConn, with Junior goalie Leah Settipane (12 saves) leading the way. Settipane will have to be at her best against an Syracuse offense who had been averaging just under five goals per game, but failed to find the net in their most recent contest, a 3-0 loss to #1 Ranked North Carolina.  Syracuse will be led by their own star goalie, Jess Jecko, and fellow Junior National Team member, Midfielder Alyssa Manley.

The weekend of October 4th and 5th features 15 OET points up for grabs.  The first of three match-ups features a frozen rematch from last season when Syracuse upset the highly-ranked Eagles, and reversed the momentum of the 2013-2014 trophy competition.  Syracuse's defense sparkled at home against BC, and The Orange will have to be at their best to stop 2014 Olympian and star forward Alex Carpenter.

As the hockey teams take the ice in Boston, the rivalry continues on grass in Syracuse, with the 3-2-3 Orange hosting the 8-1-0 Eagles.  BC has looked exceptionally strong in the early part of the season against mostly regional opposition, with Forwards Hayley Dowd (SO), and Stephanie McCaffrey (SR) leading a high-scoring offense.  Syracuse, which has been in inconsistent form against a strong set of opponents, will look to goaltender MacKenzie Moranz and forward Stephanie Skilton to lead the way in a contest that should be as close as in 2014, when the Eagles came away with the victory.

Chestnut Hill will be the locale for the final of three weekend match-ups between the two schools.  The 5-4 (0-0 ACC) Orange look to continue their dominance and grab 3 OET points against the 5-4 (0-0 ACC) Eagles, who look much improved in 2015.

So there you have it Eagle and Orange fans!  the competition promises to be an exciting one.  Can BC jump out on top early as they did in 2014?  Can they hold off SU's cross country/exercising juggernaut?  Will Syracuse football rise to the occasion again and outlast the suddenly formidable Addazio-led Eagles?  Stay tuned to BC Interruption and Troy Nunes is an Absolute Magician as we continue our coverage of the glory, the pain, and the #goacc moments of another season of The Orange Eagle Trophy!