Boston College looks to even the score and take home that badass bird of prey in 2014-15.

Share All sharing options for: The 2014-15 Orange Eagle Trophy Returns

With the college sports season fast approaching, the folks at BC Interruption and Troy Nunes Is An Absolute Magician are once again preparing for battle as our two schools lock horns to see who will win the 2014-2015 edition of the Orange Eagle Trophy. After losing out on the trophy in year 1, Boston College looks to even the score and bring that badass bird of prey of infinite majesty to its rightful home by the Bay.

While much of the Winter and Spring sports schedules remain to be announced the '14-'15 competition is starting to take shape. Below is the schedule and points system for the new season: 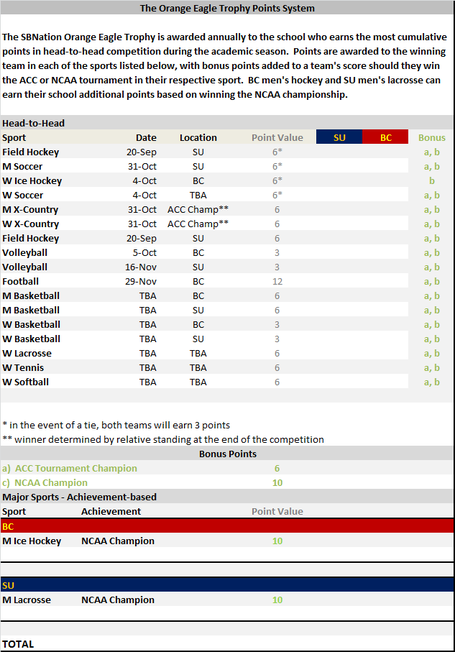 The #OrangeEagleTrophy rules committee has decided to make a few changes that we believe will make the competition more balanced, while increasing focus on head-to-head match ups between the schools:

1) More scoring!!! In a purely cosmetic move, we have decided to double the point totals from last season. Does it really make a difference? No, not at all. But dammit, this is America, and we want our point totals to look more like Arena Football, and less like a World Cup Final. Done.

2) New "banding" for revenue sports. This season, Group A sports (men's basketball and football) will earn their school up to 12 points. All other sports are in Group B and are worth 6 points each. For sports where SU and BC compete more than once during the regular season (basketball, volleyball, softball come to mind), the point totals for each contest will be equal to the overall point allocation for the sport, divided by the number of contests (e.g. volleyball plays twice = 3 points per contest; men's basketball = 6 points per contest)

3) Postseason points. For any match-up where SU and BC compete in the postseason (ACC tournament, NCAA tournament, etc), each contest will be worth 6 points.

4) Changes to men's hockey and men's lacrosse. In keeping with the head-to-head nature of the competition, the rules committee felt that these sports -- while being high profile for their schools -- have very different tournament structures. As a result, we have limited the bonus point system to include 10 points for winning the National Championship in their respective sport. Frankly, making the NCAA Tournament should be a given for both programs -- a wash, basically -- and Jerry York does not accept being just 16th best at anything, so.

5) Removal of track and field from the competition. SU and BC technically face off in the ACC Championship each year, however unlike cross country (where an equal number of runners compete on each team) there is a high degree of variability regarding the number of competitors from each school that qualify for the ACC championships. This gives an unfair advantage to one school over the other before the competition even starts.

Feedback on the updated scoring is welcome as the OE Rules Committee reserves the right to tweak the rules right up until the first competition begins.

So there you go! In less than 60 days, Boston College and Syracuse's nationally-ranked field hockey teams the meet up in Syracuse to get the whole thing started again! Will the good guys exorcise the ghosts of D------ F---- and Josh Parris and take home the trophy, or will that oddly-colored bird of prey of infinite majesty remain captive in the PNW?