As if the state of Syracuse football wasn't enough to depress SU sports fans, the Boston College Eagles happily poured more misery the Orange by taking 15 of the first 21 Orange Eagle Trophy points during the past two weeks of action. A strong showing by the SU women's soccer team was overshadowed by victories from BC's field hockey, women's ice hockey and volleyball teams. Here's a breakdown of the action so far:

Junior midfielder Romee Stiekema scored in overtime off a corner, and the Boston College Eagles smashed-and-grabbed the first six points of the Orange Eagle season with a 3-2 upset win over the 4th-ranked Orange in Syracuse. The Orange started brightly with a goal in the third minute, but BC answered back to send the sides level heading into halftime. The second half remained a close affair, with BC adding their second goal eight minutes into the second half. Syracuse increased the offensive pressure and finally broke through for an equalizer with 12 minutes remaining in regulation, before Stiekema's OT Dutch treat sent the Eagles happily back home along the Mass Pike with a well-earned victory over their fierce rivals.

Anyone from Syracuse looking for a repeat performance from the Orange following last year's upset win over national power BC were quickly and emphatically disappointed as the #3 Eagles ran riot in Chestnut Hill. Six different players scored for the home side, led by Junior defender Lexi Bender, who scored her first career hat trick. Syracuse net minder Jenn Gilligan posted 25 saves, but was left on an island repeatedly by SU's defense who allowed 41 shots to the relentless BC attack.

Syracuse finally got on the Orange Eagle Trophy board with an impressive 3-0 shutout of the Eagles in front of a home crowd at the SU Soccer Stadium. Freshman Alana O'Neill (2 goals) led a late second half outburst by the Orange, who broke the deadlock in the 72nd minute, scored again in the 78th, and added an insurance goal in the final minute. BC (coming into the game as the RPI 26-ranked team in the nation) played SU close throughout, but couldn't make their scoring chances count.

Boston College's triumvirate of Julia Topor (15 kills), Katty Workman (14), and Sol Calvete (13) led the Eagles to a convincing sweep of Syracuse in Chestnut Hill, and grabbed the final three points of the weekend. BC, look an improved side in 2014, and took control of the match early with a comfortable 25-18 win in the first set. Syracuse battled back in the closely-contested second set, however four late errors by the Orange and a key kill by Topor gave the Eagles a 25-22 win. With their backs against the wall, SU turned up the intensity yet again in the third set, but were matched kill-for-kill by BC, who finally took the set and the match following their fifth match point. The rivals will meet again in Syracuse on November 16th to contest their final 3 Orange Eagle points.

With four contests now complete, Boston College holds a solid 15-6 lead with a trio of Halloween contests up next for the rivals. The Eagles men's soccer team will hope to add another six points on the road against the Orange before the nationally ranked SU men's and women's cross country teams take the field in the ACC cross country championships. All signs point to a close OET score as the much-anticipated November 29th BC-SU football game approaches! 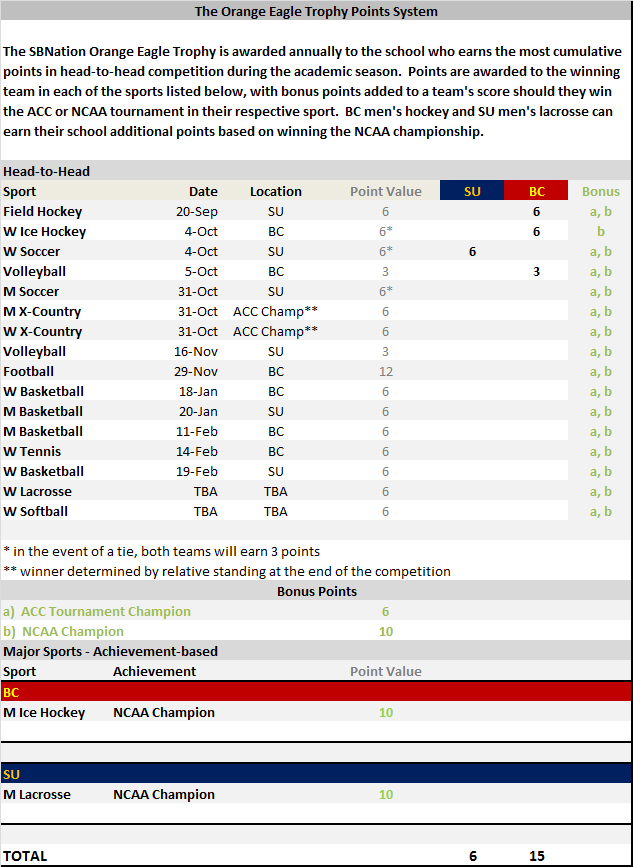