In an attempt to add some fuel to the BC-SU rivalry, BC Interruption and Troy Nunes Is An Absolute Magician have joined forces to create ... the SB Nation Orange Eagle Trophy.

Even though most Syracuse fans in the 20-to-30 year-old demographic have this strange obsession with becoming the first fan to successfully identify the Orange's natural rival in their new conference home -- Pittsburgh? Louisville? Virginia Tech? -- a majority fans would agree that Boston College is Syracuse's natural ACC rival.

In an attempt to rekindle add some fuel to the BC-SU rivalry, BC Interruption and Troy Nunes Is An Absolute Magician have joined forces to create ... the SB Nation Orange Eagle Trophy.

The SB Nation Orange Eagle Trophy will be awarded annually to the most #Hardnosed and Dudeish school who earns the most points in competition across 17 sports, distinguishing themselves not just as Massachusetts or New York's College Team (TM), but as the Northeast's College Team (TM pending). Think Capital One / Director's Cup, but just for Boston College and Syracuse. Bonus points will be awarded for conference and NCAA championships, and even our powerhouse men's hockey program (along with Syracuse lacrosse) will earn additional points based on achievements throughout the season.

At the conclusion of the academic / athletic year, the school with the most points will earn BC Interruption or TNIAAM an ACTUAL Orange Eagle Trophy where photos can be taken and spoils shared for ultimate BC-SU bragging rights. Trophy presentation ceremony and physical trophy details TBD, but rest assured, it's gonna be awesome. Like Shiva Bowl trophy awesome.

The rules and points system is as follows: 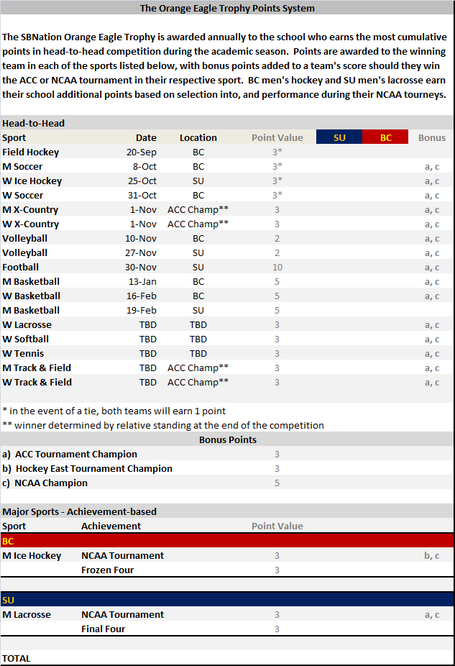 Over the course of the competition, BC Interruption and TNIAAM will provide updates and features that will lead to the moment where one school / blog editor walks away with the glory and bragging rights. The other, a year's worth of shame, misery and contemplation.

Ish is about to get real this afternoon, with three points up for grab in the Boston College vs. Syracuse field hockey game. Best of luck, ladies!

P.S. - Every rivalry of any significant worth needs its own hashtag. So #OrangeEagle it is.

P.P.S. - Stick tap to TNIAAM's The Invisible Swordsman for suggesting the idea, devising the point system and making this happen.