Chris Kreider seems to be enjoying his spell as public enemy #1 in Montreal. 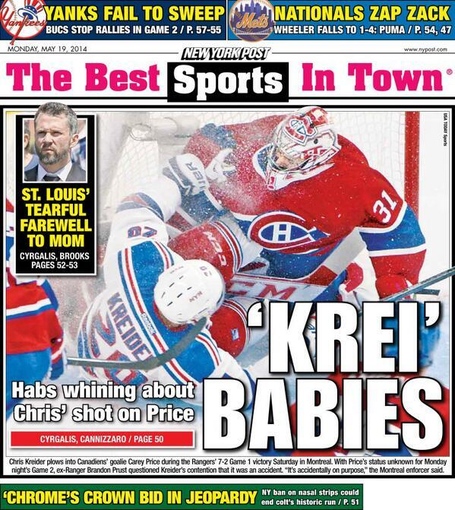 with the hysteria escalating after news came out that Carey Price was out, reportedly for the rest of the series (we'll see).

It's hard to do any better at summarizing the nonsense than Pension Plan Puppets did yesterday in an article we frontpaged:

I don't think that it's news that Montreal fans live in a fantasy land. You can blame whatever you'd like but to a large portion of the fanbase still lives in the 1970s where a Cup was their birthright and it could be accomplished just by dressing the frenchiest team that ever frenched. I'm sure the endless drooling over their pre-game ceremonies doesn't help but as one astute Twitter personality said, when it comes to ceremonies they have the distinct advantage of having been the Habs. We'll see how people react the 70th time they run some variation on their flame-related motto when, instead of Jean Beliveau passing the torch to Guy LaFleur, fans see Vincent Damphousse passing the torch to Patrice Brisebois. Magical!

But I digress, we're hear to speak about the insane conspiracy theory of the paste-eating wing of the Habs media and fanbase that thinks that an NHL player, when faced with a breakaway and an opportunity to score in a conference final game, would decide in a split second that they now have their best opportunity to win the series by launching himself feet first into Carey Price's pads. I'm not going to give any oxygen to the ridiculous fans that have bought into that ludicrous idea but I will note some of the talking heads that are giving the conspiracy theory oxygen.

The most ridiculous of the media tweets they highlighted was that of Dave Stubbs of the Montreal Gazette:

Well, you know what it's time for: 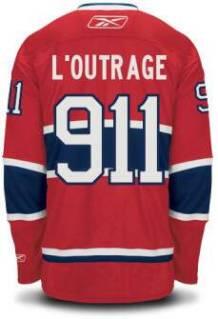 Chris Kreider is a dirty player. I hope he is suspended for attempting to hurt Price, but we know the NHL won't suspend beloved Rangers

@NHLPlayerSafety carey price is out this is s disgrace to the nhl. Kreider should be suspended for the series as well

The entire day largely consisted of a Montreal media/fan cry-fest, leading up to the game itself. Chris Kreider was roundly booed every time he touched the puck. Then he got an assist on the game winning goal:

By the end of the game, the booing gave way to:

Postgame, Chris Kreider was interviewed by Pierre McGuire and gave the old line about "you must be doing something right" if they're booing you.

The Rangers lead the Canadiens 2-0 in the Eastern Conference Finals, and with all due respect to Brian Gionta, I'm pretty sure 90% of all hockey fans who aren't Habs fans are happy about that. Enjoy the hero's welcome at MSG later this week, Chris.