Professor Salzano dishes out the grades for BC hockey's new threads

Back in May, we implored BC athletics to make some changes to the BC hockey jerseys. The most recent jersey was a pretty dramatic change from the clean design we had in the '00s, and it fell flat on its face.

There were so many awful things about the last jersey. The stripes down the shoulders were just a mess, the lower stripes around the waist didn't go all the way around for some reason, there was no tie on the neck, I don't know what the heck was going on with that stained glass thing on on the arms, and overall it just looked like some nonsense a Euro team would wear. The only thing missing was a bunch of sponsorship logos all over the place. 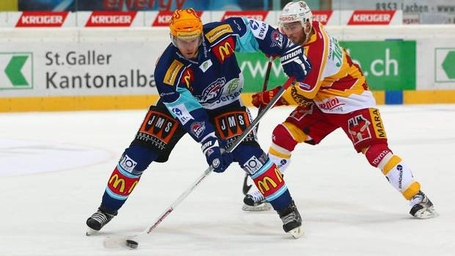 Anyway, after an excruciatingly long reveal on Twitter that felt like a month but was actually only 25 minutes, @BCHockeyNews finally tweeted the first full photo of the new threads.

The final product! A few more photos coming to show some other details of @BCHockeyNews' new uniform. #UniformUnveil pic.twitter.com/pswgSmivgq

It's not the perfect jersey for those of us who are uniform purists, but there's no doubt that it's a significant improvement of what we've had the last several years.

Heres a side-by-side snapshot of last years jersey compared to the new ones modeled by Ryan Fitzgerald #UniformUnveil pic.twitter.com/z1sBVeUW9U

Let's go through the details and give athletics a full grading of the new threads.

Joe hates the font for some reason. Taking a look at the comparison snapshot above, you can see that the font doesn't appear to have changed at all from what we just had. It's slightly more modern than what we had in the '00s, and has a subtle gold outline. No italics -- though there weren't italics on the '00s jerseys either.

I had hoped for a more old-school font, the kind we have on the newest gold jerseys, but it was not to be. Still, the font is fine. It doesn't make or break the jersey.

Much better. Much, much better, BC. It's not the same as we had in the '00s jerseys, which were closer to the bottom of the jersey and bottom of the sleeves, ending in gold instead of the base white, but then, they weren't trying to copy the old design. They got rid of the horrible vertical striping down the sleeves and went with a simple three stripe pattern that is somewhat similar to the '00s design, but still new. In fact, the striping is closer to the "Eagles" gold jersey than anything else. I like it. It adds some color without doing too much.

Also, the stripes at the bottom go all the way around now. I have no idea why the last jersey had that weird empty space in the front. Did they run out of fabric? Fortunately we don't have to wonder about that any more.

My biggest hope on the new jerseys was that they would put the academic logo on the shoulder. They didn't do that, but they did put back the primary athletic logo.

Assistant captain Quinn Smith shows off the BC logo patch -- there will be one on each shoulder. #UniformUnveil pic.twitter.com/AwC7KM8Gwt

It's a good change. The last jerseys didn't have the logo anywhere so it's nice to see it back on the jersey.

New Guy told me he thought they should have made the interlocking BC the logo on the front of the jersey. I almost slapped him. Hopefully this travesty will never see the light of day again.

Part of the reason this doesn't get an F is because I picture BC and Under Armour having a fistfight in some conference room somewhere over this ridiculous stained glass thing on the jerseys, and BC just not having the brass knuckles necessary to win the good fight.

Under Armour has to have some thing on their jerseys to make it look silly, but if there's something to be said about this it's that the stained glass thing is at least a million times more understated than most of the UA stuff. We could have something like this or this or, God forbid, this. (Aside -- yeesh, Maryland just lays down and takes it from Under Armour, don't they?)

Why did it take us so long to put neck ties on our primary jerseys?? Seriously. They make any jersey they're on look twice as good. And the championship stars were one addition the last jersey got right, so I'm happy to see them on the new ones.

I don't think this is the perfect jersey. The stained glass look is a problem for me. Joe thinks it ruins the jersey entirely but I wouldn't go that far. It really just shouldn't be there, but there were enough other changes to make the jersey an overall positive. It's clearly a dramatic upgrade from the last ones.

I do wish we went with an old-school rather than modern font, and I wish we used the academic logo instead of the athletic logo on the shoulder, but both alternatives as added to the jersey are fine. The biggest, most noticeable change -- the striping -- single-handedly brings the jersey from awful to quite nice.

It's all personal taste, though. What do you think? Vote below, and let us know in the comments.