Apparently it was not "a great day for hockey."

Share All sharing options for: Notre Dame Hockey's Jeff Jackson Not A Fan Of Outdoor Games

This isn't exactly groundbreaking stuff here. The announcement that Boston College would be involved in the third installment of Frozen Fenway was initially met with a tepid response from Eagles fans. But the sentiment rings a bit hollow coming from the Notre Dame bench boss, considering:

-- Notre Dame lost, falling further down the league standings. The Irish are currently in 8th place with 11 games to play. Boston College is in first place -- two points ahead of second place Providence. Sour grapes much?

-- Notre Dame didn't have to give up a home conference game to play at Fenway. Boston College did.

-- This year's Frozen Fenway was planned specifically so that every Hockey East program would now have the opportunity to play at Fenway once over the first three events. UConn at Frozen Fenway 2016. Catch the excitement.

-- Notre Dame got to opportunity to play at Fenway Park and don Ke$ha-inspired sweaters to impress New England recruits.

-- The game was broadcast nationally on NBC Sports Network; yet another nationally televised game for an Irish program that subjects the entire country to every Irish home game. Even games against Alabama-Huntsville.

-- There were no known objections from Jackson last year when Notre Dame defeated Miami (Ohio) in an outdoor game at Soldier Field. In fact, Jackson had nothing but praise for last year's college hockey doubleheader at Soldier Field:

"We were very fortunate. It was great weather, a great crowd. It was a fun event. My first opportunity to be at an outdoor game. I'm hoping the kids enjoyed it.

"It makes our sport," Jackson said of the event. "They've had two or three outdoor games with great crowds, this one was no different. They've got four great programs here. It's not just a single game. It's a doubleheader with four really good programs and three of the four, maybe all four, with great ties to Chicago. Chicago's a great hockey town and it's great for us because we have so many kids from Chicago and so many alumni that it's like a second home to us."

Last year "it was a great day for hockey." This year, not so much.

"It's my third time coaching here. Even then it's a special night. You still feel excited and very thrilled to be part of this. The players are so excited. I'd like to be able to get the ice like it was almost indoor ice."

Personally I'm no fan of this event but this is the credited response. Smile. Say something nice about the event and move on. Sir York gets it. Jackson does not. I'm certain that New Hampshire, UMass or Vermont -- the three Hockey East schools not competing in this year's two weekend event -- would gladly trade spots with the Irish in the future.

Jeff Jackson's hurt feelings seems to be a reflection of the Notre Dame hockey fanbase, who are feeling oh-so-sad after a 3-5-1 start to their run in Hockey East. This thread on NDNation.com made the rounds, highlighting Irish fans whining that their team will "never get a fair shake from Hockey East refs" because they're "outsiders" playing a "rough and tumble" "western style."

Here's a newsflash Notre Dame, everybody hates the Hockey East refs, they're terrible to every team, and you're finding life difficult in Hockey East because the skill level top-to-bottom far surpasses the parade of mediocrity you were facing in the CCHA beyond Michigan and Miami (and really, we have a pretty large sample of how Miami compares to Hockey East).

Quite a change in tone from the Irish after coming in to Hockey East acting like a colossus gracing us with their presence. Maybe they should just go Division I independent in hockey so they can play by their own rules the way they're used to. 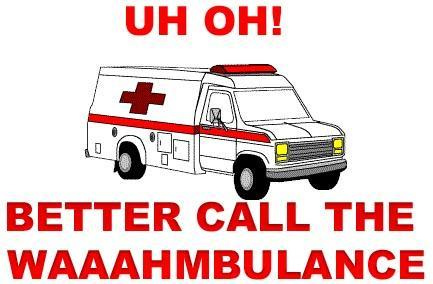