In Part II this week, we talk women's hockey and the Minnesota buzzsaw, and make a friendly wager on some predictions.

Grant Salzano: The women had a HUGE weekend sweep of #8 Northeastern this weekend. Those Pairwise and Hockey East points can't go understated. That might be the biggest weekend we'll have until our two games at #4 Mercyhurst (which will be THE BIGGEST GAMES OF ALL TIME EVER).

Joseph Gravellese:: I don't know if Northeastern is going to stick around as a TUC now that they are playing harder teams, honestly. They didn't look that great on Sunday. We'll see. But yes, big for momentum and Hockey East points to get a big weekend sweep, finally.

They're getting closer to where one would have reasonably expected them to be. #6 in the pairwise, yes?

GS:: Tied for 5th at the moment. Though there is quite a gap up to teams #3 and #4 (Clarkson and Mercyhurst) for the time being. Fortunately, we face both of them before the season is out. A sweep against Mercyhurst may be enough to get us home ice in the tournament again.

Goaltending is a problem right now. I don't think either goaltender is above .900 in save percentage at the moment. If we tighten that up, we can be scary to anyone in the country that doesn't rhyme with Binnesota...

...who, by the way, will not lose a game this year. I'm calling it right now. And yes, that's almost as big a deal as it would be in men's hockey.

JG:: Yeah, that is a reasonable prediction. It's funny you bring up Minnesota. I was looking at the women's stats page on USCHO to see where Alex Carpenter falls, because I came to the conclusion at the game on Sunday that she's definitely the second best women's hockey player (non-goalie) I've ever seen at BC (with all due apologies to lots of good players who have come through The Heights since '06). Anyway, I wanted to see where she is on the national scoring charts, because after a slow-ish start, she has been a POINTS MACHINE lately. She has a 10-11--21 line.

So I guess I'll hold off on the Carpenter for Patty Kaz campaign. But she's been one of the key cogs in the wheel as BC has gotten going in recent weeks.

Goaltending definitely needs to get a little better for BC to solidify the top spot in Hockey East. Corinne Boyles and Megan Miller have rotated hot and cold streaks; Miller got the win on Sunday and came in in relief on Friday night after Boyles got pulled from the game, but Boyles has better numbers overall this year.

GS:: Minnesota is ridiculous, it's just unfair. And with the severe dropoff of Wisconsin this year (they aren't even a TUC right now) the Gophers are really having their way with the WCHA, and really the NCAA as a whole.

I don't like it. But if it's going to be anyone out west, I'm glad it's them, despite their sometimes goonish tendencies. But their worst offenders (the Lamoreaux sisters) transferred to North Dakota a couple years back.

And -- sigh -- it's always going to be someone out west. Always and forever.

GS:: By the way, we have, thus far, the toughest strength of schedule in the country. We kind of saw that coming.

BREAKING BANTER: As we type this, Quinnipiac (men) is putting the finishing touches on a win at Providence, leading 2-0 with 58 seconds to play. Guess we're gonna have to show more RESPECK for the ECAC?

JG:: Now that's an idea I can get behind. Which leads me in to the other thing I wanted to touch on before prediction time.

You posted a fun (or maybe not so fun) hypothetical on Tuesday about what would happen to BC Hockey if BC somehow backed its ass into the B1G.

There's plenty of healthy discussion about that going on in the comments. But, briefly: REALISTICALLY, do you think ConferenceRealignmageddon is going to further impact Hockey East/BC Hockey at all? Are the dominoes done falling in college hockey, and will Foobbawww/Shootyhoop end up raining on our icy parade?

GS:: Ugh. I really have absolutely no idea whatsoever. Not 10 minutes after I posted that insane hypothetical, I saw the first of what ended up being a couple mentions of BC being a potential target of the Big Ten.

That's just ridiculous. At this point everything I thought I knew about ConferenceRealignmageddon is strewn about my floor like all of my moving boxes.

JG:: It's an awkward position to be in as a hockey-first fan, because you want to see what's best for the school. So I want to root for us somehow ending up in the B1G. Which, I guess, is possible. But it really really really would suck for hockey.

GS:: Is there any way whatsoever for us to salvage that situation? I've been struggling to think of something -- anything.

I'm making the assumption, since it happened to Minnesota et al out west, that there is no chance that we can join for all sports except hockey.

So... if the school does get bizarrely saved from ConferenceRealignmageddon, what's best case for hockey?

JG:: Yeah, I mean maybe they'd make that exception for us and not them due to a) travel costs and b) they needed Minnesota to join the B1G Hockey Conference in order for it to exist at all, a problem that doesn't exist now.

But, yeah. There's not really a Best Case Hockey Scenario if BC somehow gets to the B1G. Best case scenario, really, is that the ACC adds some southern school that brings us no closer to ACC Hockey (Louisville or whatever), and Hockey East stays steady at 12 and/or kicks out UConn.

And the ACC lives happily ever after without further poaching.

And then we all wake up in Candyland and get free candy for life.

GS:: Have to agree. The ACC somehow becoming stable and and better financially, *and* no closer to four hockey programs, is what BC hockey fans (and, honestly, everyone else who cares about BC athletics) needs to hope for.

JG:: I know that comparing college hockey to college football is comparing a bucket of apples to the entire agriculture industry, BUT I do like looking back on the fact that when the NCHC came calling, wanting to add BC and BU to their lineup with North Dakota, Miami, Denver, and the other top non-Big Ten hockey programs, BC and BU said no, and decided to preserve the tradition and rivalries of Hockey East.

Like I said, I KNOW we're talking chump change compared to football monneh. But still.

GS:: And also, Hockey East is pretty much the SEC of hockey at this point.

Prediction time! BC plays a Dartmouth team that could be at the precipice of a freefall. Who you got?

JG:: What makes you say Dartmouth could be at the precipice of a freefall? They seem pretty solid. But I can't pick against BC right now. I think we'll see an inspired effort as the team looks to set up that much-talked-about double-BU weekend with the potential to be 924 and 925 for York. 4-1 BC.

This is looking to be a much more interesting game than you may have thought when looking over the schedule at the start of the year. It'll be fun to see someone different come to Conte.

GS: Well, they seem like a team that just strung together a bunch of wins, but isn't really *impressive*. They just lost to Colgate and tied Cornell. No disrespect to them intended. I think they'll be an NCAA bubble team. But if they had a "normal" start to the season and rattled off the kind of win streak they started with mid-season, they'd be top 15, not top 3.

GS: I think I agree with the 4-1 score call as well. I'll be boring. Sorry. Just don't see how we're going to lose with everyone well aware of what's at stake the next few games.

GS: How about UNH's enormo-gantic weekend in Colorado against CC and DU?

JG:: Well Colorado College seems pretty sad this year. I feel bad about kicking them while they're down (okay, after 2011, no I don't).

UNH takes care of business in that one. But I ain't picking against Denver right now. We'll see those guys in Pittsburgh.

UNH may have a famous hockey name on the front of their jersey but they're still a young team coming back into contention. The jump up to playing a blue-chip program like Denver IN Denver will be a challenge.

GS: CC isn't too bad this year. They're a decent 7-5-0 with two of those losses against Denver. Once of them was a close 6-5 game.

I'm actually going totally the opposite of you here. I think UNH goes up and actually drops a letdown game to CC before going over to DU and locking down for a tight 2-1ish win.

I'll bet you some Raising Cane's if you're up for it. The perfect 2-0 call wins it.

GS: Plus their mascot IZZAPUPPYYYYYYY!

JG:: Their combo box is the most enjoyment you can find in a box in that area outside of...

Yeah I can't even finish that one.

God, we are so hilarious. We crack us up.

Maybe the "Free Chicken" promo at Agganis will have to do with penalties. I'd get a chuckle.

JG:: I never took advantage of the Free Chicken thing last time. It was BU getting 20 shots on goal. I'm bummed I forgot.

JG:: Ha. Except we don't want any upsets this time.

If you're going to the game, bring an unwrapped toy for the Boston College Hockey annual toy drive.

They will also be accepting toy donations at the BU game on 12/1.

GS: Ugh. The annual Teddy Bear Massacre at Agganis. Their hearts are in the right place, but it brings a tear to my eye seeing all those teddy bears thrown unceremoniously onto the cold ice. Sigh. 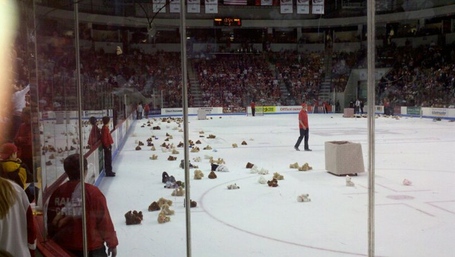 JG:: Yeah, that's always a weird one. Don't know who came up with that idea, but I'll at least give them credit for their intentions.

JG: ...have a happy Thanksgiving everyone, and a reminder for those not from New England, you're welcome for the day off.