This week we take a look back at the comeback against UMass, Banner Night, and recap women's hockey.

Joseph Gravellese: Last week, you predicted that it would be an "Ah, all is well" weekend. I said we'd struggle to victory at UMass before winning more easily at home. In some ways, we were both right, depending on how you look at it.

It was a pleasant change from our predictions this year that have been mostly wrong.

Grant Salzano: Well... All was about as not well as it could get until about 38 minutes into the UMass game. That was awful. But then it was all BC, all the time. You've been pretty accurate on your calls so far... You didn't feel that great about the season opener and you didn't feel that great about UMass. Both were accurate, until the end of the UMass game.

JG: Now, I didn't see the UMass game. What changed? How did they turn it around?

GS: We were playing the exact same hockey game as we did against NU. Just take those memories and superimpose them at the Mullins Center. And replace the never ending "Milner, Milner, you suck!" with never ending "F*** BC!" chants. Other than that, it was the same game. Just getting out worked all over the place.

I will say this, after we gave up the second goal, we woke up a little bit. We started playing better. But then UMass started to pick it back up again and it was back to the way it started. But then after the third goal, BC seemed to get pretty angry, started skating a ton harder (that particularly was really noticeable), and we finally broke through in the 3rd period. The rest is history.

JG: The second line cranking it up really made a huge difference. We can't succeed on Gaudreaubey Baker alone.

JG: No. You can't win a national title on the back of one guy. You need a balanced team.

JG: The special teams have been just stellar so far, which is a really good sign early on. As I said in my game recap, Steve Whitney could be a huge weapon for this team if his slapper from the point on the power play keeps resulting in goals.

GS: What a freaking cannon that was! Oh my Lord in heaven, I think the twine is still cooling off from the puck heating up going through the atmosphere.

JG: Penalty killing has been excellent too, which is key since we seem to be once again taking an absurd amount of penalties. Matheson once again picked up four more PIMs.

GS: The special teams are really something to behold early on. Defensively, we sure had better be, considering how many penalties we've given up, like you said. But the success scoring goals on the man advantage somehow seems to be the one thing we've kind of lacked over the years for some reason. That would be a big weapon to add. 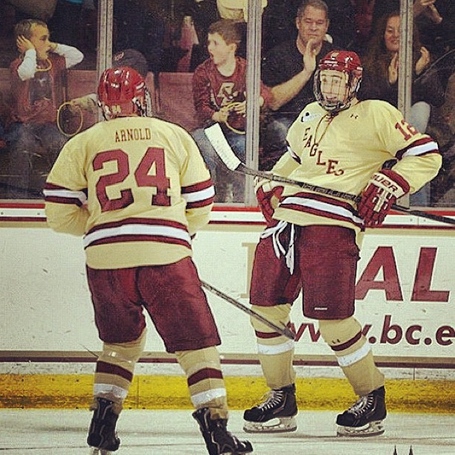 JG: Agreed. Kevin Hayes' goal celebration was one of the highlights of the night.

JG: I'm sure he doesn't know what a discount double-check is. He doesn't watch TV, but if he does I'm sure he watches PBS or other things without ads.

Also: thumbs up to the student turnout for the game (which may have been a record). Thumbs down to the noise level. Let's hope it was on the quiet side due to the amount of freshmen at their first game, because that many people should be making more noise.

GS: I didn't think it was too bad. It wasn't the best we've ever had but I think the fact that the game was in hand rather early kind of contributed.

JG: Vinny Saponari spent ten minutes in the penalty box. Too easy, right? Should we leave this one alone?

GS: I just hope we had Lysol handy.

JG: In sucky news, Inside College Hockey shut down this week. They've been one of the best sources for college hockey news and insight for a long, long time, and they will be missed.

Relatedly, how do you feel about the state of college hockey coverage on the 'net right now?

GS: Well BC hockey coverage has never been better, amirite??

In all seriousness -- I think given the "niche" sport that hockey is, there are plenty of places for people to get their coverage. USCHO really is top of the heap and there's not too much more you could ask for. College Hockey News is another good source. Put it this way; for how concentrated the sport's following is, I don't think the space is 'lacking' in coverage.

JG: I'm not a big fan of USCHO's coverage to be perfectly honest. I find it thin. I feel like INCH really went a lot deeper than USCHO does. That said, between the Blogs and the Twitters and the Intertubes it's possible to get a ton of great college hockey coverage each week.

On the women's side... ugh, it was tough to see them drop another one-goal game on Saturday against an (admittedly improving) UNH team on Saturday. But, phew, they got a win under their belt and Skarupa got her first collegiate goals.

GS: I absolutely hated going up to Lake Whit to see us play UNH while we were students. Even though they have been on several down years, they have the biggest home ice advantage in the conference playing on that enormous Olympic-sized sheet. We only see BC beat them once up there -- Once! Our senior year! -- when we were students. So the loss is frustrating but more of the same, I suppose.

Nice to get a solidly convincing win in the home game, but we're really going to have to pick it up quickly to make sure we stay high in the Pairwise.

JG: Speaking of Pairwise, we have arguably our two biggest games of the year coming up next weekend.

GS: Yessir -- Thursday and Friday (??) we play our only two games of the year against western squads. Winning the weekend will go a long, long way toward earning a home game in the NCAA quarterfinals.

JG: We really need to win some comparisons against western teams to do so. Even though Duluth isn't the team they usually are (they're are only getting a single vote in this week's USCHO poll) it a winning record against one of our few common opponents to the western teams is essential.

GS: Definitely. 3 or more points this weekend is really a must I think.

Come back tomorrow for part two, where we're joined by "The Ice Is Life," Lowell's hockey blog, to talk about the upcoming home-and-home against the Riverhawks.