In part 2 of our weekly segment, we poke fun at Northeastern a bit more, discuss the talent-filled women's hockey exhibition, and make some more probably incorrect predictions.

Joseph Gravellese: So this week's USCHO poll dropped on Monday, beginning our weekly tradition of complaining about the continued existence of completely meaningless polls. And yet we continue to talk about them every time they come out, so. Bottom line, Gophers solidified at #1, BC down to #3, see anything else interesting on there?

JG: Right? As you said to me by text when the poll came out, "Why does Union still have a first place vote? They lost. Also, they suck."

Claver2010: Nice to see all Beanpot teams ranked as well. Granted, as you said it means nothing right now.

GS: I wish there was a way to look that up because I have no idea the last time all four teams were ranked. It has to have been quite a while.

JG: They might have made it into a preseason poll at some point in the past few years because they keep getting highly touted recruiting classes only to have mediocre to poor seasons. They were pretty good back in the mid-2000s but for much of that time NU was riding the strugglebus. We will have to research this before next week.

GS: I'm actually surprised we're still ranked as highly as we are. I thought we'd drop to 5 or 6. We really looked awful against Northeastern. But I guess that's what winning 3 out of the last 5 national championships will get you: RESPECK.

JG: Also, I doubt most of the pollsters are sitting down watching the stream of that game on GoNUXStream.com.org.gov when there are other games on TV. Can we please talk some more about how lucky we are that college hockey has an objective formula for picking the tournament field? Seriously though.

C2: Kudos to NU on the stream though, got tons of positive reviews and best of all, was free. Can we get Brad Bates to organize this?

GS: NU's stream has been like that for a few years now. First I thought they were going to just have it free to get people to see how awesome it is, but nope, still doesn't cost a dime. It's incredible, really.

JG: Oh absolutely. Their stream is incredible. I'm always AT BC games at NU but I've watched the highlights back and they're crystal clear. People who watch live say the stream looks great, and they have comprehensive coverage across all the various sports teams. Really would be great for BC to get on that.

C2: Just add it to the to do list for Bates.

JG: Of course, he's got plenty of other issues to deal with. Have fun, Brad!

One thing he and the rest of BC's athletics adminisration won't have to deal with is selling tickets for Saturday night -- the game is sold out.

GS: Surprised it lasted as long as it did. When I got my tickets two weeks ago I was told there were just a couple of sections left.

C2: Great to hear, and I'm sure it'll be just as filled as Matthews' sell out on Saturday night. 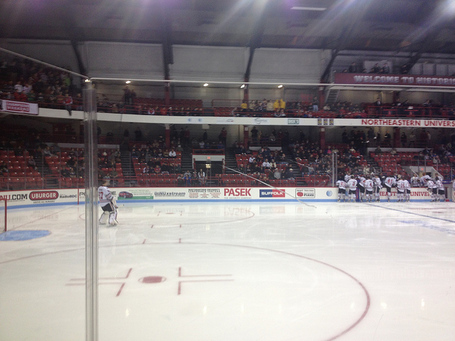 JG: Ha. I'm glad you brought that up. The atmosphere at Matthews was obviously incredible on Saturday night, but the lower bowl was maybe half-full at best for their "sell out," meaning it was maybe 75% full overall.

GS: Someone said that students who bought tickets for the lower bowl moved up into the student sections. Well, if that's the case, then apparently half their actual student section tickets went unsold because they all fit up there just fine.

JG: Now I, personally, don't care, but you can always count on a few ding-a-lings, with at least one of them from Northeastern, trolling the BC offseason thread on USCHO or whatever, talking about BC's empty seats or inflated attendance numbers. So I found that amusing.

Yeah, I saw that post on USCHO... There must have been about 1000 empty seats down below so the upper deck would have fallen down if that were the case.

And really, this is to take nothing away from the atmosphere generated by NU students and fans on Saturday night -= it's just a fact that they don't have much of a general public following. If they played in an arena the size of Conte it would be 1/3 full most of the time, as is the case for pretty much any Hockey East team other than UNH or Maine. A topic we've discussed ad nauseum here and all over Twitter.

C2: He sucks so much I'm sure they'll all enjoy polishing his rings. They were so proud of themselves for that one too.

GS:The backslapping and high-fiving was my favorite part.

JG: Hahaha, very much so. Though they did take what BU usually does with the back-and-forth goalie taunt thing and crank the volume up to 11. It was so amplified that they effectively made it their own. I give it a Don Cherry [Thumbs Up!] even though it was driving me completely insane. 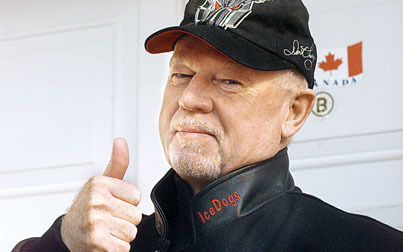 Any other thoughts on the week that was in Hockey East?

GS: BU was my safety school.

C2: Just thrilled to have hockey back.

JG: Amen to that. When I was at Matthews it felt like we'd never left. Being back into the flow of hockey season just makes me so much happier day to day.

The women's team also lost on Saturday, though it was a much lighter affair, as they dropped a 4-3 exhibition to the Boston Blades, a local semi-pro team comprised of some tremendous recent graduates of top NCAA programs. Grant, you were there with me -- I thought BC looked pretty good for a lot of the game, against a supremely talented team.

GS: We definitely started out with guns blazing -- we jumped out to a quick lead and didn't just hang with them, but really controlled much of the early part of the game.

JG: And Dana TriviGno -- emphasis on the G, because she's not related to Corey Trivino -- scored a nasty goal on a quick wrist shot that made BC and USA Hockey legend Molly Schaus look very human.

GS: ROOFED that sumbitch. One of those goals where you go "OHHHH!" instead of "YEAHHHH!"

JG: And redshirt freshman Megan Miller made her first BC appearance and looked solid, turning away a ton of quality Blades chances, though she did let in a weird long-distance floater to start the third period. That said, Parker Milner gave up a long-distance goal on Saturday too, so it puts her in good company.

GS: That goal was nuts... I wish there was video of it. Puck was looped in from the red line, bounced like 5 feet in front over her, and rolled in off her shoulder.

JG: Alright so our predictions continue to get worse and worse every week, though I successfully predicted Northeastern beating us last weekend. Everything else was pretty much a basket of fail. Let's try again.

The BC men have two tough games: away @ UMass, and banner night vs. Northeastern. Does the team bounce back with a couple of wins, or what?

GS: Yes. UMass is awful and there's no way we lose at home. This will be one of those "oh, okay, all is well" weekends. Call it 8-1 on aggregate.

JG: I think we will see some growing pains early on in the season but I can't pick less than four points this weekend. I don't think much of UMass but they will give us a tough game at Mullins, thinking maybe a narrow 2-1 win; then yes, I agree, we will come out firing at home against Northeastern on Saturday.

C2: I'm going to stay with my NEGNAN self, 3 points this weekend. There are too many questions on offense to predict a sweep. Tie at Mullins, W on banner night.

JG: What I'm looking at in Hockey East: UMass-Lowell heads to Denver and Colorado College on a tough two-game swing. Going to be tough for them, but I think they pick up one win.

C2: I predict Providence heads out to Brad Bates' old stomping ground and takes at worst a split.

JG: That would be huge for Hockey East's PWR early. Both of those series are, actually.

Miami doesn't have much of a track record against Hockey East, but it's not tournament time so maybe they'll be okay. And hey, maybe Bates was the problem and not Rico!

GS: I've got my eye on that BU/UNH game. That should at least give us some idea of which of these teams is for real. Not that it's a small sample size or anything.

JG: And finally, I predict BC takes three points in a home-and-home women's series against UNH this weekend -- and they'll be much needed points after stewing on that BU loss for two weeks.

GS: UNH is terrible again. I'm thinking we'll see a big four point weekend for them. I was impressed with the game against the Blades, for what it's worth (not much).

I think that'll do it for this week. Anyone who shows up late Saturday and misses the banner raising has to give up their season tickets.

Thanks to Claver2010 for stopping by to chat with us. We'll be back next week to talk about how wrong our predictions were again and to look at results in small sample sizes as though they really, really matter in the long run.