Share All sharing options for: A Guide To Boston College Football Uniforming

The football program has decided to shelve the red bandana-inspired threads for the rest of the season. That's a good thing, as I'd rather see the program keep them more as an annual tribute to Welles and all other Eagles that live by the school's "Men and Women For Others" motto than devalue them by trotting them out for other games this season.

That said, I certainly hope we haven't seen the last of the "Man in the Red Bandana"-inspired threads.

Now, I don't want the program to parade out new, over-the-top uniforms every week like Maryland. But I think there could be more variety in uniform selection that'll satisfy both Under Armour's desire (need?) to constantly tweak BC's uniforms and the school's desire to keep things more traditional.

With the help of #BCTwitter, I submit to you A Guide To Boston College Football Uniforming:

1. Superfan Gold Jerseys Need To Be A Thing

@bcinterruption @HeightsSports to keep Under Armour and recruits happy do one Red Bandanna game and one SuperFan game a season.

It was kinda cool when Boston College / Under Armour decided to mix things up with gold jerseys for the 2012 game against Clemson. The problem was that it was the wrong gold. The jersey matched too closely with the helmet color and with the white stained-glassing effect on the shoulders, the jerseys looked two-tone on TV and in photos.

Instead, imagine the team coming out in Superfan gold jerseys to match a raucous Alumni Stadium student section.

Brad Bates and the Athletics Department have really been pushing this new Boston College football theme days thing. Why not break out Superfan gold jerseys for the annual Homecoming game? Encourage both students and visiting alumni to wear their class's Superfan shirt. For alumni in classes that pre-date the Superfan t-shirt era, create a new Superfan shirt and give out to all Homecoming participants. Suggested pre-Superfan shirt class slogan: "DOWN IN FRONT" ("GET OFF MY LAWN" works as well).

The Alumni Stadium crowd for the annual Homecoming game becomes a Superfan gold-out.

Break out the red bandana on Service Day, the home game closest to 9/11 each season. Fans are constantly bemoaning the lack of traditions surrounding the football program. What better way to start one up by annually honoring the memory of Welles Crowther (BC '99) and throwing on the same threads that powered BC to an upset victory over ninth-ranked USC.

The program hasn't worn a throwback jersey since unveiling these gems for a November 2004 game against Rutgers. There are a bunch of really cool Boston College football uniforms from past eras. Why not dip into the vault and bring back one of BC's more classic looks for the every-other-season Rivalry Weekend home game vs. Syracuse?

4. Maroon Jersey, Gold Pants For All Other Home Games

5. Flexibility With The Road Sets

This generated the most back-and-forth on Twitter, with some of the older alumni / fans favoring a white-gold uniform combo, while younger fans prefer the all whites. BC doesn't have much history with the all white look -- a uniform combo that's only been around since its debut for the 2007 season -- though the program had a lot of success wearing the all-whites during the 2007 and 2008 seasons.

Personally, I'd prefer white-gold over white-white for road games, but see the value in both sets. Not a huge fan of the white-maroon look, though BC has some pretty solid memz wearing that combo, too.

But really, more of this please: 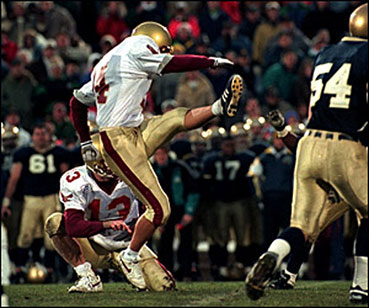 Maybe even create some sort of unwritten rule in determining the road set. All-white uniform combo for road games within the Atlantic Division, and white-gold for ACC cross-division games and other non-conference games?

Always. If we ever see these again, it'll be too soon. Break out the no stripe helmets for Throwback games.