Share All sharing options for: Boston College and Maryland Football: An ACC Retrospective

Maryland is off to the Big 10, and with them goes one of Boston College's most memorable opponents. The Eagles played the Terps nine times in the past nine years, and over that time there have been some important games for both teams. The purpose of this post is not to mock the Terps, their fans, their wretched stadium, or their coach, but to remember the series that BC absolutely dominated.

In the Eagles first game against the Terps since joining the ACC, the Eagles overcame four turnovers to beat Maryland on senior day at College Park. The #23 Eagles were balanced in every sense of the game as Matt Ryan threw for 230 yards, and Andre Callendar ran for 120 yards. Maryland was on top going into the fourth quarter, but BC responded with a TD from LV Whitworth. Maryland cut it to a five point lead after a touchdown from Sam Hallenbach to Vernon Davis, but the Eagles scored the last ten points with a Ryan Ohliger field goal and a thirty five yard INT touchdown return from Ray Henderson.

Boston College controlled this game from the beginning, as Sam Hallenbach gave up a fumble to Jolonn Dunbar which led to the Eagles scoring an early touchdown. Matt Ryan dominated the Maryland defense which couldn't touch him, throwing for two touchdowns, the biggest being a 34 yard strike to Tony Gonzalez in the second half. This was a huge win for the #20 Eagles who beat their fourth Top 25 team of the year.

Gutpunch time. After a devastating loss the week before to Florida State that took the Eagles out of the Top 5, BC lost again this time against the Terps. The #8 Eagles couldn't keep the Terps out of the end zone, allowing 470 total yards. To add insult to injury Maryland was only 4-5 going into the game and was playing with leading rusher Keon Lattimore (hamstring). Maryland was also without second-leading receiver Danny Oquendo (knee), and linebacker Erin Henderson. Maryland quarterback Chris Turner eviscerated the Eagles with three touchdowns and zero INT'. This was one of the most frustrating losses of Jeff Jagodzinski's brief tenure.

This is the game that put Billy Flutie in the BC lore book along with his father Darren and uncle Doug. Up 14-7, BC lined up to kick a field goal, it was a fake, Flutie grabbed the ball and flipped it to Jordan McMichael to give the Eagles a big enough lead to give them the victory. Maryland battled back, but another key pick, this time by Robert Francois put the game out of reach, and the Eagles were heading to their second straight ACC Championship Game, while Maryland finished the season 7-5.

Boston College was in the midst of a big change, as Jeff Jagodzinski was fired and Frank Spaziani was finishing the beginning of his four year error as head coach of the Eagles. This game was awful. There was a total of 10 points scored in the second half as Steve Aponavicius hit a big field goal in the fourth. Somehow this was not Ralph Friedgen's last game as a head coach of the Terps as they finished the season a putrid 2-10.

An absolutely brutal game for the Eagles, the loss being their fifth straight of the season. Danny O'Brien picked apart the Eagles defense for three touchdowns hitting Torrey Smith, Ronnie Tyler and Kerry Boykins on touchdown passes. Even worse for BC was the horrific injury to safety Wes Davis, which effectively ended his playing days. Chase Rettig was a hot mess, throwing for two INT's and going 18/33. This would be the last time Maryland beat Boston College.

In the midst of one of BC's worst seasons in memory, a hero emerged, at least for one game. Rolandan "Deuce" Finch took the 1-6 Eagles on his back and rumbled all over Maryland for 243 yards and two touchdowns. In front of a rocking crowd of around 10,000 at College Park, the snowy field could not stop BC from scoring 28 points. Woot.

While most of BC nation was in the midst of a fall of utter malaise, the football team actually showed a bit of life on their way to their last victory of the season. Wearing those AMERICA uniforms BC somehow won this one. With 52 seconds left, Chase Rettig hit Johnathan Coleman on a fourteen yard TD pass. Honestly, most Eagles fans don't remember this game as it was a piece of bacon wedged between a whole bunch of poop that was the rest of the season.

I'm not even going to summarize this game. I'll just leave these two images below. Thanks again Randy Edsall. 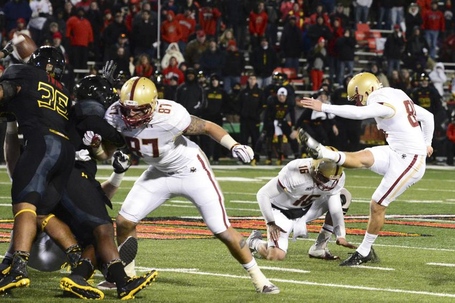 And that does it. BC finished the series 7-2 against the Terps, which is pretty incredible considering four of those games were coached by Frank Spaziani.  Now it's off to the Big Ten for Maryland. We'll miss you guys. Not really the games, per say but the easy jokes that you provided us year after year. Whether it was your silly uniforms, "dream job" coach, terrible attendance, gross stadium, terrible location, or inability to beat even the worst BC teams, you will be missed. But on your way out can you make sure you leave us the $50 million you still owe the conference. Don't make us hunt you down to get it, remember we know people.