Can Boston College be successful against Wake Forest in this year's installment of #therivalry?

The first week of football is complete, and we are all as confused about Boston College football as we were before the season. This week's opponent, Wake Forest, should be a much more accurate gauge of the Eagle team we will see for the remainder of the season. If you are like me, you are dying to see what BC team comes flying out of the tunnel on Friday night, the mess we saw in the first half, or the team that dominated the second. Or maybe it will be a combination of both. There is a lot riding on this game, including possible bowl eligibility, and of course a year's worth of bragging right in the #therivalry I'm expecting this to be a good game, and a close one, so let's see what questions remain for the game.

Will Ryan Day open up the offense more to prevent Wake Forest from stacking up 2,470 defensive players in the box? Did Day hold back some plays last weekend to surprise Wake Forest? What will Boston College do this week to keep Michael Campanaro from scoring a bazillion touchdowns like last season? How will Don Brown's aggressive defense, which was effective last week, work against an ACC offensive line? Will this offensive line continue to keep Chase Rettig clean? Will Al Louis-Jean play in this game, or is he in Steve Addazio's doghouse? Can Andre Williams be an every down back?

Where in the world is Tajh Kimble, and will we hear from him soon? Heather Dinich tweeted yesterday that David Dudeck might play wide receiver tomorrow. Will that work? In related news, will any of the other non-Alex Amidon WR's actually make a play this week? Can Kasim Edebali continue to be an effective defensive end? Manny Asprilla, a lockdown cornerback? Can BC protect the ball and win the turnover battle? How packed will Alumni Stadium be on Friday night?

What To Drink As You Prepare For #TheRivalry 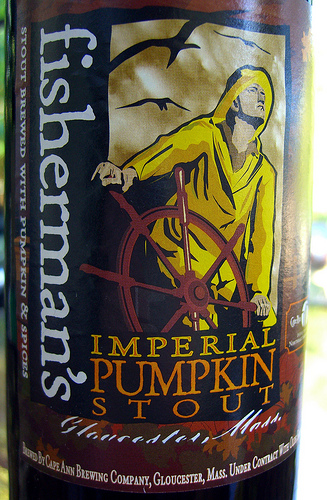 Fisherman's Pumpkin Stout - This is a perfect beer for this game for a multitude of reasons. First, it's a pumpkin beer, but not that Pumpkinhead crap, it's a stout, a manly beer which is great for football. If you need to follow A.J's beer plan, just remember the darker the beer that tastier it will be. Also it's the beginning of fall, which means the lemony zesty summer beers are gone, which makes me happy. Finally stouts are the best for a cool fall night. Friday's game temperature could be in the 40's, so go with something dark and if you are starting to get chilly, remember a saying my college dorm buddies always said "beer is a sweater for your face". So when you are nice and toasty in the stadium, you can thank your favorite football blogger.

CAW CAW!!! IS IT SAFE FOR BAWDWIN JUNYOR TO COME OUT AGAIN? I'Z IS SCARED, I HEARD THAT THERE IS A REEL EAGLE AT BEECEE AND HE HAS RAZOR SHARP TALONS THAT COULD TEAR THE HEAD OF AN INFLATABLE MASCOT! HE LOOKS SO ANGRY! IS HE THERE? I THINKS HE'S WATCHING? I HAS SEEN HIM EVERYWHERE'S AND I HAS BEEN HIDING IN DA BATHROOM FOR FOUR STRAIGHT DAYS. IS HE THERE? OKEE, COAST IS CLEARED!

LAST WEEK WAS AWESOMENESS TO THE MAXIMEST! EVERYONE WAS SO NICE TO BAWDWIN JUNYOR AND I EVENS GOT A KISS FROM A CHEERLEADER! WOO WOO. I THOUGHTS EVERYONES WAS GOING TO HAVE THE SADS BECAUSE SPAZIAMIANI WAS GONE, BUT IT WAS THE OPPOSITE! I ALSO THOUGHT PEOPLES WOULD BE SCARED OF DDAZIO'S SCREAMING! BUT IT WAS THE OPPOSITE TOO! I THINK I NEED TO GO BOUNCE ON MY HEAD SOME MORE, MAYBES THAT WILL HELP ME UNDERSTANDS ALL THIS!

TIME FOR SOME BAWDWIN JUNYOR PREDILATION! WAKE'S FOREST IS GOING TO HAVE NO ANSWER TO THE CHASED RETTING AERIAL CIRCUS! THROW THE BALL 60 TIMES, AND OPEN UP THE FIELD. COME ON RYAN'S DAY! DONT BE A TURTLE! BOSTON COLLEGE WINS 41-20! CAW CAW

Gametime Song of the Week -Notorious B.I.G & 2Pac- Freestyle (Where Brooklyn At)

Boston College and Wake Forest has been dubbed #therivalry by BC Interruption and our sister Wake Forest blog Blogger So Dear. So if we are talking rivals, let's talk about two of the biggest rivals in the history of hip hop. Notorious B.I.G and 2Pac. This song has literally has nothing to do with the two teams playing, but gives me an excuse to use this video in a post. This freestyle was created before the two of them wanted to kill each other, and it kicks so much ass. Biggie's verse makes me want to run through a friggin wall, and 2pac responds with a verse that is equally as good. The rivalry ended in tragedy for the two rappers, but the Boston College & Wake Forest should reach legendary proportions on Friday night. And if I hear this song being played in Shea Field tomorrow, I might just cry with glee.

To make us accountable for our predictions, we are going to play a game this year with our predictions. Take the prediction, find the scores by both teams, and give out points. So say that Brian is the closest to the actual score with his prediction from last week with a score of 31-17, he was 10 points off on his combined BC and Villanova scores, he gets 12 points, while Conrad was way off with his prediction of 38-3, and was the furthest off, and gets 0 points. Everyone else falls in between. Also correct scores are worth 6 points each. Picking the wrong team is worth -5 points.

It's rivalry time! Are you heading to Alumni Stadium Friday night? Show off our maroon and gold on our Facebook page!

Are you ready for #TheRivalry? Getting out of work early to go to the game? Or are you watching it on ESPN?