This is going to be an interesting weekend for BC for a myriad of reasons, most of which have nothing to do with the actual game. Personally I can't wait to see the Welles Crowther gloves and helmet (and hope I can buy the BC shirt with the red bandana lettering), Welles the Eagle returns, and it's a Saturday night game. All should make a pretty electric atmosphere on campus. But then we just need to look at the other sideline. USC, the team last year that took BC to the woodshed, and probably even better than they were when we played them in LA. Hide yo' kid, hide yo' wives, the Trojans are coming into town.

There are so many questions about this team, hopefully I won't forget one. Can Tyler Murphy throw an accurate ball more on more than 50% of his drop backs? Will BC abandon the run quickly if the Trojans stuff them early like the Eagles did against Pitt? Can either the BC offensive or defensive line win a battle this week, or will they look like swiss cheese against the blue chippers on the Trojans? Addazio has said that he wants to open the playbook, is this an actual real thing or is he just playin'? Can we please, please, please use Sherm Alston for more than two plays this week? Has Mehdi Abdesmad healed anymore? USC has a bruising back in Buck Allen, are we bracing for James Conner 2.0? Can Shakim Phillips make another big play this week? Will USC have any sort of hangover from the Stanford game, and is this BC team good enough to take advantage of that?

Will Welles the Eagle look any less terrified than he did last year? Will Shea fill up to capacity, and what will that mean to tailgaters? If last week was a test run for the big game this week, that means the grand unveiling of salted pretzels will be imminent correct? I have a feeling BC will have a few other gameday surprises set up for this game, any guesses what that might be? 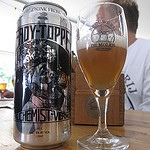 This is the holy grail of beers. One of the hoppiest, yet most delicious beers I have ever tasted. But it's not sold in Massachusetts, you literally have to travel to Vermont to get this beer. I have had friends take pilgrimages to the Green Mountain State to find it, which may sound kind of insane, especially because it is just a beer. But oh my is it worth it. These real silver bullets are sold in a 20 oz can, which gives you like twice the goodness you get out of a regular beer. It's a double IPA, which basically means its like a shoving twice the hops down your gullet, but again it is so delicious. The alcohol content, and amount you drink per can will get you in trouble quickly if you drink them too fast so take it easy if you want to remember this game. Again that is only a disclaimer, some of you may not want to remember this game, in that case throw this in a Flabongo (pink flamingo beer bong) and go to town. (Editorial Disclaimer: Don't flabongo the Heady Topper or you will be watching the USC game from the St. Elizabeth's emergency room)

AJ: I am honored to sit down today with a USC great, he was really excited to do it, but insisted on remaining anonymous.

Ray-Ray: Thanks AJ! I got so pumped for this interview that I was going to bring my Heisman Trophy with me, but for some reason I can't seem to find it.

Ray-Ray: It was that bastard Kanye West right? He's always stealing my stuff, first it was Kimmy K, and now this. He's probably wearing it around his neck....

Ray-Ray: Did OJ take it? I know that dude is down on his luck, but come on man, it probably is going to end up on EBay now or something.

AJ:  Ray-Ray, let's change the subject here. What was your favorite part of being a Trojan?

Ray-Ray: Oh being a Trojan was the best thing that could happen to me. The weather is beautiful, the girls are all dimes, and it was the greatest feeling waking up every morning to an envelope filled with cash slipped under my dorm room door.

AJ: And don't forget about the education.

Ray-Ray: Oh right, yeah, I put a lot of work into that. Going to class once a month, I mean my agent told me that I needed to go more, but come on isn't that what I was paying that kid with the glasses for?

Ray-Ray: ALL MONTH LONG GET A FOOT LONG SUB FROM **redacted** FOR ONLY $5!

If you don't like my song choice, here is a playlist of the Beach Boys.

Jurassic 5 - What's Golden. If you are reading this I am assuming that you enjoy hip hop. I bet many of you thought, "Hey we are playing USC where is the Death Row/gangsta rap?". But here we are, I threw you all a curve ball and picked a rather underground group from Los Angeles, that doesn't rap about murder, girls and drugs. Honestly, give this group a try, they were one of my favorite rap grounds as an undergrad. They are so old school with their flow, and their DJ work from Nu Mark and Cut Chemist is insane. Hey they even sort of sing their choruses, so that kind of makes them legitimate right?  They broke up in 2007 after only three albums, which bummed me out to no end, and then all tried to go solo which predictably went no where for all of them. They reunited this year, and toured, but a new album hasn't been discussed (according to Wiki). But seriously, if you want to hear what good rap can be, and want to branch out from Drake, Lil Wayne and Rick Ross, you should check these guys out. It will be well worth your time.

Brian - Luckily Brian is on the other coast, as far away from this impending s******* as possible. However he has the modest prediction 20-10 USC. BC scores the same amount of points as the number of Shea Field tailgater allotted wristbands jk.

A.J - I have seen this story before, BC goes into a game where they are heavy underdogs, and I dont imagine their long winless streak against Top 25 teams will end, 34-10 USC. I'll be at a tailgate again on campus, making sure that I have enough buffalo chicken dip and beer to make this game palatable.

Grant - Stares at BC hockey's new uniform, turns to BC game and sees USC scores, turns back to the new uniforms and sings "Let It Go". 35-10 USC.

Joe - Somewhere on campus there is Joe Grav, a man on a mission, counting down the days until women's hockey resumes. And partying with AJ. 34-14 USC.

Dan - Sitting in the upper deck, while BC is losing the New Guy will be writing out questions for next weekend's guest on the radio show, and the only one who cares about the Maine game...an actual black bear. 37-13 USC

Only one of the BCI crew was brave enough to face the music last weekend and pick Pitt. That would be New Guy Dan Rubin. The rest of get a giant goose egg for selecting BC (changing the rules up a little this year).

Going to make it to Alumni for Saturday night's game? Got some good photos of your tailgate or the kickass new boards at Alumni Stadium or Welles the Eagle? Make sure to put up your photos on Facebook, or if you want you can email them directly to me at bchysteria at gmail dot com. Please make sure you understand that by emailing them to us you are giving us the right to use your picture on our posts!

Can Boston College pull off the upset? Or will USC take them out back and have them look at the flowers?  Make sure to leave your predictions in the comment section.