The football team will honor the memory of Welles Remy Crowther with red bandana-emblazoned helmets and uniforms.

Thursday marks the 13th anniversary of the terrorist attacks of September 11, 2001 that claimed the lives of 22 Boston College alumni, including Welles Crowther (BC '99). Crowther, a former Boston College lacrosse player, equities trader and volunteer firefighter, single-handedly saved the lives of more than a dozen people in the World Trade Center's South Tower before losing his own life.

On Saturday, when the Boston College football team takes the field against USC, the Eagles will be wearing helmets and uniforms emblazoned with a red bandana to honor the "Man in the Red Bandana."

Via the Boston Globe's Kevin Cullen:

BC is playing Southern Cal in football at The Heights Saturday night. The bookies aren't giving BC much of a chance: they're 20-point underdogs. But every BC player will be wearing helmets and uniforms emblazoned with a red bandanna when they play USC.

Bookies factor many things into setting a line, but not red bandannas. Go BC.

In 2011, to mark the 10th anniversary of the 9/11 tragedy, Central Florida fans organized a social media campaign urging fans to wear red bandanas to the game in Orlando, while Boston College donned their traditional gold helmets with a red bandana decal on the back. 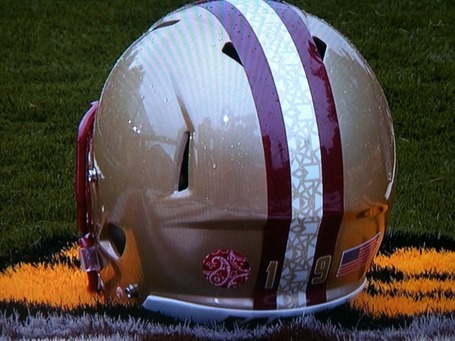 On the 10th year anniversary of 9/11, I suggested the football team don red bandana-patterned helmets for the home game closest to September 11 each season as a tribute to Welles. A few weeks later, reader SirDRob whipped up this excellent "Welles Crowther "Man in the Red Bandana" honorary uniform concept design. 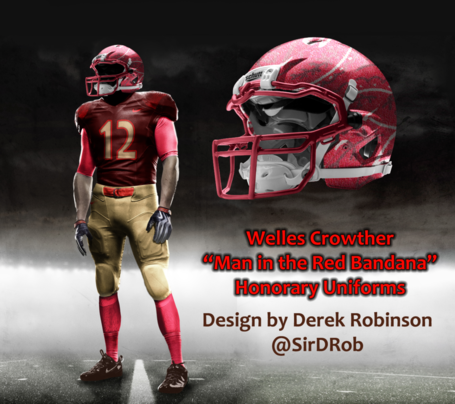 I hope whatever form Saturday's uniform tribute takes, that they are tastefully done and something that the program can keep going on the home game closest to September 11 each season.

Next Up In College Football