On Saturday, Boston College quarterback Chase Rettig joined Nebraska and UCLA players and fans in honoring the memory of UCLA redshirt freshman Nick Pasquale, wearing a "NP" sticker during BC's road game at USC. Pasquale, 20, was hit by a car and killed while walking in his hometown of San Clemente, California on September 8. 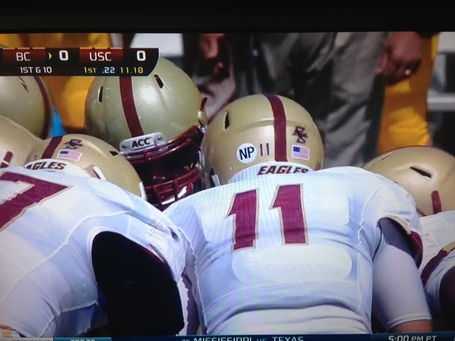 A three-year standout at Rettig's own San Clemente High School, Pasquale had walked on at UCLA last fall. The 5-foot-7 receiver had earned the nickname ''Pacman'' for his participation on the Bruins scout team, helping teammates gear up for the Bruins' weekly opponents. Pasquale had played in his first game during the final offensive series of the Bruins' win over Nevada two weeks earlier.

Both UCLA and Nebraska players wore helmet decals with his jersey number 36 on them. Nebraska students also borrowed from a school tradition in releasing 200 blue and gold balloons in Memorial Stadium in honor of the Bruins wide receiver. The Bruins gave Nick's father Mel the game ball following UCLA's 41-21 victory over the Cornhuskers.

A touching tribute by Rettig and one that may have gone a bit unnoticed this past weekend. I think he speaks for the entire Boston College community in offering condolences to the Pasquales and the UCLA Bruins family dealing with this tragedy.

The Pasquale family has set up the Nick Pasquale Foundation to honor the memory of their son. Donations can be made at nickpasqualefoundation.com.