How will #Andre44Heisman do in his final regular season game with the Eagles? Can BC pull off win #8?

Share All sharing options for: Boston College vs. Syracuse: Final Thoughts and Predictions

Can not believe the regular season is about to end for the 7-4 Boston College Eagles. And speaking of that, did anyone really think that we would be sitting here at the end of the season talking about a possible eight win season and a possible Heisman candidate (humble genius excluded)? This has been a season that people are going to talk about for years to come, the year the Eagles returned back from their four year long siesta, and got back to what they do best. Kicking butt and taking names. I'm sure we will get into this much more during the off season, but I want to give a big thank you to Brad Bates, Steve Addazio, Ryan Day and Don Brown for turning around the program and giving these student athletes (especially the senior) something to cherish. Thank you.

At this point, can anyone stop Andre Williams? What kind of yardage does Andre Williams need to be invited to the Heisman Award show? What kind of game will he need to win it? How many "holy s***" runs will Andre Williams have on Saturday? Will his shoulder injury effect him at all? Will Syracuse simply wear down by the end of the game like so many teams before them? How will Myles Willis get involved? ACC Journal's David Glenn has the entire BC offensive line on his All-ACC team (some 1st/2nd/3rd team), can this offensive line truly get the credit they deserve? Can Rettig continue to manage the game with 10-15 passes and fewer mistakes than we saw in the first half of the Maryland game? Will Harrison Jackson and Spiffy Evans be ready for the game? Does it even matter? On defense, Don Brown wanted 36 sacks this season, BC is sitting on 32, will our goal be reached? Will we be seeing Kasim Edebali on Sunday's next season? Can Nate Freese finish the season perfect on field goal attempts?

How will Andre Williams' Heisman candidacy help BC recruiting? If BC wins this game, and Andre Williams has another monster game, will a bigger bowl come knocking for the Eagles? How can the Eagles prevent another season ending let down? With Syracuse's secondary playing poorly will the Eagles try a few more deeper play actions? If Duke loses on Saturday, will Steve Addazio get any ACC Coach of the Year buzz?

What To Drink While Eliminating the Orange From Bowl Contention: 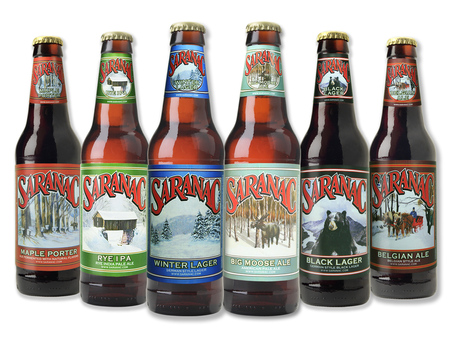 Anything by Saranac: Now Saranac may not be the greatest beer in New York (I'm also very fond of Brooklyn Brewery), the Saranac wins by a hair for two reasons. One, I camp often in Upper New York and my family and friends lived on this beer for many a summer. It's tasty, relatively cheap, and there is a solid variety of beers to choose from. The above Winter Pack is not my favorite (I hate the Maple Porter), but their IPA and Pale Ale's are both great standard choices. The second reason I picked Saranac over Brooklyn is the proximity of the brewery. Brooklyn Brewery is in the city, which is about as far away from Syracuse as it gets, if I were to select this beer I might as well choose something from Boston or Philadelphia. Saranac is based in upper state New York, in Utica, therefore winning the beer of the week option. Plus if you are watching this game from Massachusetts you should be able to find this beer in most liquor stores or packies.

CAW CAW! I CAN NOTS BELIEF THAT ITS BAWDWIN JUNYOR'S FINAL PREDILICTION OF THE REGULARS SEASONING! I HAZ THE SADS! IM NOT A HAPPY BIRD TODAY, NOT AT ALL. FIRST OFF, BAWDWIN JUNYOR IS A SUMMER BIRD, I LOVES THE HOT WEATHERS OF KLEMSUN, FLORIDA'S STATE AND, NCEE STATE, BUT WHAT IS THE DEALS WITH SEERACCUSE? I WAS TOLD BY A LITTLE BIRD THAT THEY HAVE POLAR BEARS UP THERE AND LET ME JUSTS SAY THAT I AM NOT A FANS OF THOSE NASTEE BEARS!

SECONDLY, I AM MADS AT COACH DAYS AND DAZZIO WHO TOLD ME THAT ALL OF THE BLOCKING DUMMY'S WERE BROKEN BY ANDRE WILLIAMS SO HE WANTED THE BIGGEST DUMMY IN THE SCHOOL TO STEP IN. I KNEW THIS MEANT ME. MISTER WILLIAMS (COACH DAZZIO INSISTED ME CALL HIM THAT) RAN OVER ME SO MANY TIMES I FORGOT WHO I WAS! I CRIED FOR THE GOOD OLE DAYS WHEN PLAYERS WERE JUST ALLOWED TO EAT SANDWICHES AND CHILL OUT. COACH SPAZ CAN YOU SAVE ME FROM THIS WILLIAMS HURT PARADE? AT LEAST I KNEW WHEN YOU WERE HERE THAT THE REGULARS SEASON WAS OVER, I WOULDNT HAVE TO WORRY ABOUT A BOWL GAME!

SATURNDAY'S GAME FEATURES A FRUIT. I DON'T KNOWS MUCH, BUT I KNOW THAT FRUITS DO NOT PLAY FOOSEBALL WELL. AND I EXPECT THAT MISTER WILLIAMS CRUSHES FRUIT AND MAKES A NICE JUICE FOR BALWDWIN JUNYOR TO DRINK. MMMMMMMMMM I LOVE ORANGE JUICE! CAW CAW

If there is any rap group out there that I think defined not only an entire region of the country (the dirty south), but a whole genre of hip hop, it's A-T-L's Outkast. Of course I selected this group because of Andre Williams' Heisman candidacy, and the hashtag #andre2000, which I am sure some readers on here (probably Brad Bates too) that have no idea that it's a take on Andre3000 the name of one of the rappers in the Outkast. So for the final rap song of the regular season this one goes out to you Andre Williams, playa.

I love the name of this track which is one of the reason I chose is. There is a wide selection of Outkast tracks to choose from including Rosa Parks, Ms. Jackson and basically anything from their older albums. But I wanted to choose a song that not only has a great beat and raps, but one of the greatest titles of all times. And if you can figure out what Big Boi and Andre300 are saying at the beginning before the song, please translate because it sounds like they are speaking a completely different language.

Brian knocked his last pick out of the park by only missing on both scores by a total of five points (31-23), putting him in for a showdown with Dan going into the final regular season game. Pretty much this is a two horse race now as Joe got what he deserved by choosing the Terps last week, and myself/Grant/Jeff falling too far back to make much noise. So who you got? Brian or Dan's predictions?

Bravery the cold and heading to Syracuse for the final game of the season? Going to watch more #Andre2000 dominance? Want a picture of your tailgate or group of friends featured in the Bowl Season Final Thoughts? Make sure to put up your photos on Facebook, or if you want you can email them directly to me at bchysteria at gmail dot com. Please make sure you understand that by emailing them to us you are giving us the right to use your picture on our posts!

Can Boston College keep the Cuse out of the bowl season? Will Andre Williams' solidify his Heisman candidacy on Saturday? How will you remember this season?