The second half of the season opens up with a matchup against the Heels.

Finally we are back after a bye week, and a special "up yours" to the Gregorian Calendar for providing us with too many Saturdays and not enough games. We can all now breathe easily now that FSU, Clemson and USC are in the rear view mirror. Ahead of the Eagles is a schedule that should be, let's say a little more manageable. The quest for a bowl birth continues tomorrow with a trip down to Chapel Hill to face the 1-5, but still respectable UNC Tar Heels.

UNC is horrid against the run, how will Andre Williams and Myles Willis fare against the Heels? How will Truman Guptafel handle being thrust into the spotlight again? Can Chase Rettig make it through a road game without another catastrophic turnover? Can he make some manageable throws this week? Will the offensive line keep him clean and give Rettig some time to make his reads? Is there anyone on the Eagles that can cover UNC tight end Eric Ebron? Will BC be able to find a way to get C.J. Parsons or Spiffy Evans involved in the offense this week? Can Kasim Edebali continue to make game changing defensive plays? Will Nate Freese continue to be flawless on kickoffs and field goals? Will Steven Daniels continue to improve his play at linebacker? Are we at least guaranteed at least one big play from Kevin Pierre-Louis? Is UNC tailback A.J. Blue somehow related to me?

How will Boston College manage the very different skill sets of quarterbacks of Bryn Renner and Marquise Williams? Will UNC be deflated after a soul crushing loss to Miami or will that loss leave them revitalized? Can we make it through a two minute drill without making decisions that make our fanbase lose it's head? Can BC win it's first road game since 2011? Is UNC really as bad as their record indicates, or has this been a reflection of a difficult schedule? If UNC starts stacking the box, does BC have an answer on offense that could keep UNC honest?

What To Drink Down On Tobacco Road - Boston Beer Works Octoberfest 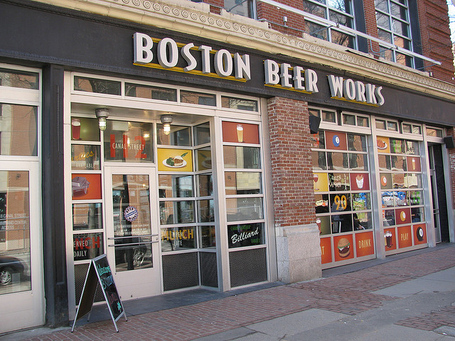 This week I was struggling to think of a beer that would be appropriate for a game against the Tar Heels, and BCI writer Joe gave me some inspiration "AJ, it's the last football game in October, pick an Octoberfest". So I thought to myself, what company makes the best Octoberfest? Sam Adam? God no, too sweet and tastes kind of flat. Harpoon? Sure, but they have a huge selection of beers and I could pick that brewery almost every week. I wanted something different. How about a beer company that has a bar/pub in Salem (home of the Witches), in which I visited during a bar crawl called "Drunken Happenings" (a play on words on Salem's Haunted Happenings) to watch the BC-Clemson game. Beer Works has a bevy of October beers, including a handful of pumpkin ales, and some Octoberfests that are rather good. And all of the beers have Salem inspired beers, like Witch City Red, which is pretty appropriate given the time of year right? The beers are actually quite delicious there, but a little on the pricey side, but you can get your own personal TV to watch at your booth while you drink/eat, and that makes up for the cost. Oh yes, just as a hint, don't go to Salem during Halloween it's probably one of the biggest money pits in the country.

BOOOOOOOO BOOOOO!!!! ITS UR FAVORITEST BOO BIRD BAWDWIN JUNYOR HERE WITH FOR A SPOOKYTACULAR EDITION OF MY PREGAMING PREVIEW! IN THE LAST TWO WEEKS I HAS BEENS A BERRY BERRY BUSY GHOOL. I SPENDS THE FIRST WEEKEND EATINGS THE CANDY CORN AND BEGGGING BRADLEY BATES TO LET ME SPEAKS AT GERRY YORKS BIRTHDAY PARTY, BUT WOULD YOU BELIEVE THE NERVE ON BRADLEY, HE SAYS "NO BAWDWIN, WE HAVE SOMETHING BETTERS FOR YOU, YOU'S IS GOING TO GO INTO THE KITCHEN AND PUTS SESAME SEEDS ON ALL OF THE PRETZELS"! BATESY WAS RIGHT, I WAS SO HAPPY THAT I FINISHED THAT AND WENT RIGHT ON TO STOMPING AND FLATTENING ALL OF THE PAPI GINAS PIZZA INTO A NICE FLAT CRISP. MMMMMM TASTES LIKE MY BIRD SEED!

I READS THE COMMENTS HERE, AND I SAWS THAT SOME OF COMMENTERATERS SAY THAT BAWDWIN JUNYOR SAYS NOTHING IMPORTANT. WELL MY CREATURES OF THE NIGHT, HERE IS MY PREDILICATION. I THINKS THAT HAVING TAR ON YOUR FEET MAKES YOU SLOW, AND GIVES THE EAGLES A GIGANTUAN ADVANTAGE. COACH DAZZIO WILL DAZZLE THEM ALLS WITH AN AERIAL SHOW THE LIKES WE HAVE NEVER SEEN. DO I HAS TO DO ALL THE HEAVY LIFTING HERE???!! WE HAVE THE PEOPLES!!!!!! CAW CAW!!!

Gametime Song of the Week - A Tribe Called Quest- Scenario

I don't know what is better about this song, the great raps or the unbelievably awesome low tech "computer" graphics they used to set up the video. I love the buttons and screens they used in this video, seriously I think at this point I could produce something better using my Iphone. Add that all on top of fantastic early 90's urban wear, fade hair cuts (which are apparently back in style), and references to such athletes as Bo Jackson, Broadway Joe Namath and you have one killer song. Plus we get introduced to a young up and coming rapper, named Busta Rhymes (who I saw at BC). This song was selected because we all curious about how BC is going to play this weekend and "What's the what's the scenario?" with UNC.

Again, I try to stick with some good non-gangsta hip hop when I create these posts, and A Tribe Called Quest is about as far away from that genre as it gets. I know many of you out there hate rap, but this group is pretty visionary in terms of where they go with their music, and the jazz infused album The Low End Theory may be one of the greatest hip hop albums of all time.

Dan's Music Choice: Seal - Fly Like An Eagle - I associate the song with Space Jam, which is Michael Jordan, which is just a reminder that you're not a football school.

No one was really close in predicting the Clemson-BC game two weekends ago, but in terms of getting the closest the winner was Grant who was a combined 30 points off. A close second place was actually a tie between Brian and New Guy, while Joe/myself/Jeff were just a little off.

Heading down to North Carolina for the weekend? Partying with friends before the game? Want a picture of your tailgate or group of friends featured on next week's Final Thoughts? Make sure to put up your photos on Facebook, or if you want you can email them directly to me at bchysteria at gmail dot com. Please make sure you understand that by emailing them to us you are giving us the right to use your picture on our posts!

Are you ready for this weekend's matchup with the Tar Heels? Can the Eagles add to the Heels woes? What are your thoughts on the game? Leave them in the comments!