With a new category this week!

Andre Williams. What more can you ask this kid to do? Boston College's own MACK truck rushed for a school record 339 yards on a school record 42 carries to break both the ACC and school record for rushing yards in a season. The N.C. State defense knew Williams was coming right at them and they still couldn't slow him. I mean, just look at this poor soul:

Williams has rushed for more yards than 69 FBS teams -- for those keeping track at home, that's more than half -- and has two more games, at a minimum, to add to the greatest single-season rushing performance in school history.

Postgame On-Field Celebration. This flew a bit under the radar, but on Friday, the program issued a release letting fans know that they were encouraged to mix, mingle and take photos on the field at the conclusion of the final home game of the season.

"This is just a small gesture of thanks to our students and fans for their support this season," Director of Athletics Brad Bates said. "Our students and loyal season ticket holders are the heart of our fan base and they have played an important role in our team's success at home this season. We encourage them to stick around following the game for a great band concert and social opportunities."

That decision led to this scene: 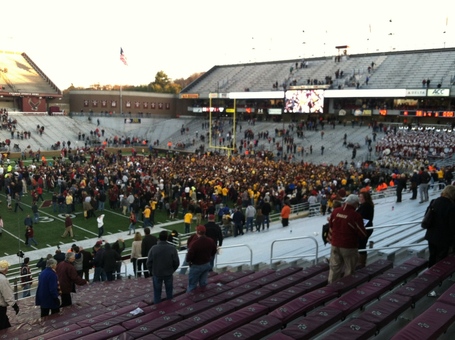 I'm not at all exaggerating when I say this moment on the field did more good for the program long-term than anything that's happened over the previous four seasons. This is a memory that the players and coaches will never forget, will keep the fans coming back and can only reaffirm the decisions of the recruits in next year's recruiting class.

Both Brad Bates and Steve Addazio ... these guys get it. Just watch Addazio's postgame remarks:

Now if you'll excuse me, I need to go run through a g-d brick wall.

Alex Amidon's game-saving heads up play. Not sure how many receivers would be following their star running back full sprint into the end zone where it looked like the back was going to get the score; let alone have the awareness to jump on the ball to preserve, to borrow a hockey term, the game-winning score. Amidon's fumble recovery TD extended the lead to two scores. Who knows what happens if that run goes for a touchback, momentum swings the Wolfpack's way and the State offense takes over at their own 20 down just six points.

Rettig's 2-point conversion. Rettig had a pretty pedestrian day, all things considered. The senior QB threw for just 53 yards on 8-of-15 passing. I suppose that's to be expected when your star running back accounts for 72 percent of the Eagles' total offense on the day. Still, Rettig's willingness to pick up the Eagles' 2-point conversion with his legs when it was clear he was going to get flattened was one of his more underrated contributions to the victory. He also made some good check-downs and didn't force things on the Eagles' third second half drive that ended with a Nate Freese 39-yard field goal. As Williams has become even more prominently featured in the Eagles' offense, Rettig has transitioned into more of a game manager than anything. He limited his mistakes and didn't force things when they weren't there; which at this point in the year is really all the coaching staff can ask of him.

Run blocking. The entire O-line opened up huge holes for Williams to run through all afternoon. I thought the best play, however, was the pulling and blocking on Myles Willis' 19-yard touchdown run. Ian White's block sprung Willis and he ran untouched into the end zone. Matt Patchan was also downfield on the play. All he did was more or less push his defender to the ground. Patchan has been a huge addition to this year's offensive line. Whoever found that kid deserves a raise or something.

This particular play was also remarkable in how quickly BC got the play off. The offensive line basically sprinted to the line and Rettig had the ball snapped before the N.C. State D could get fully set. Not sure if Rettig saw that or if someone called that in from the sideline, but the Pack defense scrambling to get into position helped Willis run untouched into the end zone.

The dudes on D. Don Brown's dudes played much better this week than last, generating pressure on Mitchell and making life generally uncomfortable for the Wolfpack QB. As a unit, BC forced five punts over the Wolfpack's first seven offensive possessions, four three-and-outs and a fourth drive that ended with the botched field goal attempt. Coming into the game, N.C. State didn't have a prolific ground game by any stretch. Still, the Boston College defense limited the Pack to 35 total yards on 26 carries. With a few FBS exceptions, that's very good against almost anyone they play.

Kasim Edebali. The senior did a bit of everything on Saturday, finishing with at a TFL, a sack, a pass breakup when State was backed up to their own goal line and the Pete Mitchell fumble recovery. Huge turnaround from the week prior. Edebali's emergence as a force on the defensive line has been one of the great stories of the 2013 season. When it's all said and done, Edebali may just have played his way onto an NFL roster next season.

2013 home record. Before the wheels really started to come off in 2011 (2-4) and 2012 (2-4), Boston College was one of the most dominant teams playing while at home over the previous decade. The Eagles went 50-15 (.769) at home from 2001-2010, good for the 20th best winning percentage over that time frame. It only took Addazio six games to get that BC home field advantage back. Boston College finishes 2013 with a record of 5-1 at home; the lone loss of the competitive variety to what may very possibly be the greatest ACC program in history.

The Andre Williams fumbles. Not really sure what was going on here, but BC has done a remarkable job of holding onto the football and limiting mistakes. Until Saturday. The Eagles were very fortunate to pounce on one of Williams fumbles and the heads-up play by Amidon saved the game-winning TD. Boston College is +6 in turnover margin this year a year after finishing -5.

Dave Dudeck punt non-returns. The good news was that the Boston College D forced the Wolfpack to punt a total of eight times. The bad news is that BC returned exactly zero of those punts. This is where the Eagles really miss Spiffy Evans. Fortunately, four of those punts were for touchbacks and two more were downed outside of the 20. Still, Dudeck's decision to let the ball roll resulted in poor starting field position for the BC offense (though I guess this did help Williams amass a total of 339 yards on the ground).

Pass defense breakdowns. The BC D did a great job of keeping the Wolfpack defense in check during the first half. The only breakdown was on the 61-yard screen pass that set up State's only first half touchdown. In the second half, BC's D got burned by the fake WR handoff touchdown. The play developed at a snail's pace and Rashard Smith still had plenty of time to find Quintin Payton in the end zone. The secondary really sold out for the run there, giving State the big play TD. The other big play was Garrett Leatham's 52-yard strike to Jumichael Ramos which Addazio was NOT pleased about. He mad.

No ugly for Boston College this week, but N.C. State's special teams unit made sure this game wouldn't get completely shut out of this category this week.