The preseason is over, it's time for the Eagles to go head to head with the big boys.

Alright folks, the creampuff portion of our schedule is over (don't worry though we still have Wake Forest and Syracuse), it's time for BC to show their moxie against the dreaded Florida State Seminoles. BC has become the chic pick this week for upset alerts, but in order for that to happen a lot is going to have to right for the Eagles. Let's look at the important stuff, including our predictions, beer selection, and of course everyone's favorite Lou Holtz in an inflatable bird suit Baldwin Jr.

Will the Real Darius Wade please stand up? How will BC's offense look against a legitimate defense? How will they move the ball in the air with Jalen Ramsey lurking? Can Jon Hilliman/Tyler Rouse/Marcus Outlow/Myles Willis get anything going on the ground? Will Sherm Allston play a role on Saturday? What wide outs will be able to get open against a very strong FSU secondary? How will the offensive line hold up against easily their biggest test of the year? On defense can the big boys up front contain Dalvin Cook? Will Don Brown throw lots of pressure at Everett Golson or will he force the QB to stay in the pocket? Can BC have another dominating performance on defense? How will the secondary look against Travis Rudolph and FSU's other speedy receivers? Will these come down to the *gulp* kicking game again?

Will Steve Addazio pull out all the stops and punch FSU square in the war painted face? Will the atmosphere of the game be similar to the USC/BC game last year? How emotional will the Welles Crowther ceremony be? Are we talking fire cannons again for the entrance? Will Welles the Eagle be on hand, or is that no longer an Alumni Stadium thing? What will the proportion of FSU to BC fans be? 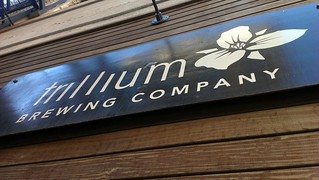 Usually I pick a beer from the region of BC's opponent, but emotions are running high for this game so I just said screw it and picked a Boston beer. Not only did I pick a Boston beer, but I picked possibly one of the greatest breweries in the country. If you aren't familiar with Trillium they are a tiny brewery located near the seaport district of Boston. If you want to get their beer you have to a) get their during the absurdly small timeframe they are actually open and b) wait in an equally absurd line. But the beer you get there is absolutely worth the wait. I have stood in line with growlers numerous times, and the fresh beer you get at Trillium is an absolute treat. I picked the Farmhouse Ale because it is the flagship beer of Trillium, and an absolute classic. Some of the limited edition beers are hit or miss, but certainly worth trying, but the Farmhouse Ale is a perfect beer in every sense of the word.

BALDWIN JR: CAW CAW! WOWZERS I AM BACK TO THE BLOGGING WITH MY MAINE MEN AT BEE CEE INTERRUPTUS! I WUZ SO EXCITED LAST WEEK THAT COACH DAZZIO LET BAWDWIN JUNYOR PLAY NOSE TACKLE DURING THE 4TH PERIOD! I GOTS TWO SACKS. WELL TODAY, IZ BROUGHT UP MY BESTEST FRIEND, AND LONGEST BEECEE FAN EVER. PATRICK MCGONAGLE THE THIRDS!

Patrick: Hi Baldwin Jr. I don't know why I'm even here, I don't find you funny. This whole post series is stupid.

BALDWIN JR: YIKES PATWICK, I NEEDS TO WORK EVEN HARDERZ TO MAKES YOU LUV ME! WHAT ARE YOURS THOUGHTS ON THE BEECEE SO FARS?

Patrick: This whole program is an utter embarrassment, from not playing Alabama, USC, Ohio State and Harvard each year to not winning 10 games a season, they are a joke. Steve Addazio hasn't sold me on anything yet.

BALDWIN JR: BUTS WE BEAT YOUESHCEE LAST YEAR! AND MADE IT TO THE PINBALL BOWL!

Patrick: Look what do you want a Participation Award? If I was BC last year I would have declined the invitation to the Pinstripe Bowl and said "Look we are a team steeped in tradition, we aren't going to a bowl unless it's the Rose, Sugar, Fiesta or maybe the Sugar".

BALDWIN JR: WOWZERS THAT DOES SOUND LIKES FUN! WEEEEEEEE IM GOING TO TO JUMP WITH EXCITEMENT

Patrick: Sit down Baldwin, I can't see the game. That's another thing, you and the rest of those tramps under 35 need to stay in your seat during games. Stand up does nothing to help, and if you don't? I'm going to call BC Security to have you removed! Also, can BC please make tailgating more expensive? I have been around long enough, I'd rather price you all out of the campus.

BALDWIN JR: OH OK, I WILLS SOLEMNLY SWEAR TO SIT ON MY HANDS AND CLAP POLITELY WHEN BEECEE DOES SOMETHING GOODS. SO PATWICK, WHAT ARE YOU PREDICTING FOUR TONIGHT'S GAME?

Patrick: Well BC has the best wide receivers in the nation and they need to throw it 40-50 times to win. Otherwise I'll scream for Addazio's head. FSU win 45-7. BC? Pssst. Frauds

BALDWIN JR: WOWZERS I LEARNED A LOT FROM YOU! CAW CAW!

Geto Boys- My Mind Playing Tricks On Me

The Geto Boys have to be one of the most underrated rap groups of all time. They have had a ton of members at various times, but the most popular members have to be Bushwick Bill and Scarface (who may be one of the best rappers of all time) Most casual rap fans will know them for their song "Damn It Feels Good To Be A Gangsta" from the movie Office Space, which in itself is a solid song, but this choice is even better. I picked it because of my hopes for this game, if BC is going to win they are going to have to make FSU players believe that their minds are indeed playing tricks on them.

Here we go, our first game with a little dissension amongst the writers

Jeff -  BC fails two point conversion to tie less than 4 minutes left. We never get the ball back. Will be watching at the always an eagle triangle chapter game watch in Durham, NC at Chammps Kitchen and Bar. FSU 21 BC 19

A.J -  It's gameday baby, I'll be on campus with arguably my largest tailgate ever. However, my Eagle blinders can't help me get past the feeling that something bad is going to happen. BOOO AJ BOO FSU 24 BC 21

Grant - Actually attending the game this week, at AJ's tailgate. BC 20 FSU 16

Dan - Maybe stopping by AJ's tailgate. (COME ON DAN YOU KNOW YOU WANT TO) At 23-16 late in the fourth, Wade throws a costly pick at a bad time. We all leave bummed but not upset. Some moron promptly tells us Flutie should start. FSU 30. BC 16.

Arthur - Will also be at AJ's tailgate (Ooh, BCI tailgate mayhem will ensue) FSU 27 BC 20

Coach - Guess what? Coach will be at AJ's tailgate. Eagle defense keeps it close, but this isn't Howard and this week we learn how far the offense has to go FSU 27 BC 13

Jeff and Joe predicted the same score for BC/Howard so they split the 1st and 2nd place points, AJ and Dan continue to wallow in the basement. Want them to fail even more? Just have BC win tonight!

Will you be at the game hoping for the upset of the year? Post the pictures of your tailgate to our Facebook page!

Will BC stun the Florida State Seminoles and give them their first ACC loss in years? Or will the Seminoles prove to be too much for the Eagles? Leave your final thoughts and predictions below!