A second straight touch matchup for Boston College. Can the Eagles pull off a miracle?

Break time is over folks, time to get ready for some more exciting Boston College football! The Eagles are done licking their wounds after the beatdown in Los Angeles, and is getting ready for....FSU? Seriously? Come on scheduling gods, what the hell is this? You had to pull BC from the firepit and throw them in an even bigger inferno. Sometimes I hate life.

All whining aside, BC has a game to play on Saturday, and they better bring their A game this weekend because the Seminoles are even better than the Trojans. At least this game is going to be at home, for Parent's Day Weekend, which even though it makes little sense, it should prevent Alumni Stadium from being filled with Seminoles fans wearing face paint and doing that damn tomahawk chop.

Let's look at what Boston College needs to do to pull off an upset, and what you can do as a fan if that fails.

Will Chase Rettig have the time to make solid accurate passes this weekend, or will FSU's defensive line be living in the backfield? Will this offensive line open up some holes for Andre Williams? For the fourth straight week I ask, is there any receiver on this roster that can make plays that isn't named Alex Amidon? Speaking of the long haired WR, will FSU be bracketing him all game? On defense, what will Kasim Edebali and Mehdi Abdesmad look like? Will they be the disruptive linemen we saw in the first two games, or will FSU's offensive linemen swallow them up like USC's line did? Can BC bring enough pressure to disrupt Jameis Winston? Will Al Louis Jean ever be a starting cornerback for the Eagles? Tahj Kimble anyone?

How is Boston College's offense going to vary from in week's past? What will Ryan Day do if the run game just isn't working against a stout Florida State defensive line? What defensive plans does Don Brown have to disrupt the Florida State offense? Can Boston College continue to make it through entire games making few to no penalties? Can the Eagles win the crucial turnover battle? Can BC put together long sustained drives to keep FSU off the field? If the Eagles fall behind early, how will they respond? Can BAMF Eagle become the good luck charm for Boston College?

What To Drink As You Warily Anticipate Florida State's Offense 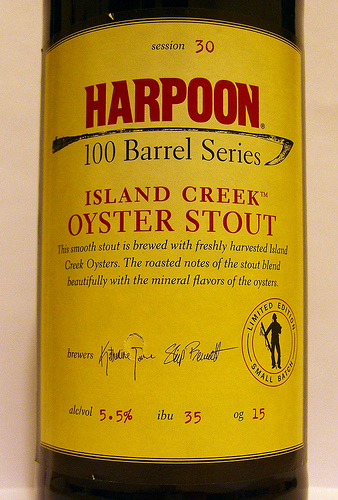 Harpoon Oyster Stout: If you have read this column over the past two plus years, you probably have realized that I have a special affinity for dark beers especially stouts. This beer is probably one of the most unique beers I have ever tasted, and believe me it's really good. It is not joking, it has real oyster in the actual beer, which gives it a real great flavor. It's not like drinking beer mixed with seafood, but it takes a standard stout and the oyster adds a smoothness that can't be beat. This week I chose this because we need a beer that is made in New England, and a flavor this is completely unique to this region to help rid the Seminoles of any mojo they are feeling coming up here. And what is more New England than a beer with real oyster in it?

Grant -- Apple Cider, because it's fall and we're going to get shitcanned by FSU so eff it let's just have something normal and tasty. If you're a girl who wears yoga pants, Pumpkin Spice Latte.

Joe's Drinking Advice for the game:

Drink as much as you can safely imbibe before the game. You are going to need it.

CAW CAW! IT'S ME THE BA-L-- UM X? OH NO'S BAWDWIN JUNYOR CAN'T SPELLS! WELL I AM HERE AND ALL READY TO GIVE YOU MY PREDICTIONS FOR THE WEEK! DURING MY WEEK OFF BAWDWIN JUNYOR WAS VERY BUZEE, I GOT IN A DUNKING DONUTS COMMERCIAL WITH GRONKMAN, I MADE A MUSIC VIDEO WITH THE NEW KIDS ON THE PORCH, AND BEST OF ALL I WENTS OUT TO DINNER WITH COACH ADDAZIO AND BROWN!

THE NICEST COACHES IN THE WORLD TOOK BAWDWIN JUNYOR TO THE STOCKSYARD IN BRIGHTON. THE COACHES SAID "BAWDWIN JUNYOR WE NEEDS TO TOUGHEN YOU UP, LETS GET YOU A STEAK!" BUT I AM A BIRD I SAYS AND I ONLY EATS WORMS AND SEED! BUT COACH DAZZIO INSISTED, AND HE GOTS ME TO EATS A WHOLE RIBBED EYE ALL BYS MYSELF. GRRRRRRR BAWDWIN JUNYOR IS GETTING TO BE A DOOOOOD! LET'S HOPE THOSE PETA PEOPLE DON'T GET ANGRY WITH ME BECUZ I WAS EATING MEAT. HOW DO THEY FEELS ABOUT INFLATED MASCOTS?

I AM SO EXCITED THAT THE BEECEE IS PLAYING THE FLORIDA SEMINOLES THIS WEEK! I CANT WAITS TO SEE MY GOOD FRIEND JUMBO FISHER, HE WAS SO NICE TO OUR OLD COACH FRANK SPAZAMIANI, AND HE TOLD BALDWIN JUNYOR WHY. BECAUSE HE FELT BAD FOR THE GUYS! I PREDICT THE EAGLES WILL SORE TO GLORY ON THE WINGS OF THE HEISMAN CHASE! 56-7 BEECEE!! CAW CAW.

Before being publicly destroyed by Jay Z at Summer Jam, Mobb Deep was the s***. Seriously look this up, it's pretty funny, one of the rappers was a ballerina before he started spitting about guns and money.

This song is probably their most famous song, and if you ever saw 8 Mile, it's the song he is rapping to himself as he is getting ready for his first battle at the beginning of the movie. Why did I pick this one? Because BC is going can't be "shook" this weekend, they have got to be all in, take some chances and throw all their weapons at FSU and try to catch the Seminoles off guard.

Brian - Firing up the grill, making this a bi-coastal event. 42-14 FSU
Jeff - Rooting for the Eagles down South where it is much warmer. 35-20 FSU
Conrad - Is it college basketball season yet?
Grant- Watching the game on TV after a morning at the Durham Fair (Woot!). 45-6 FSU
Joe - At Alumni, hoping for a miracle. 34-14 FSU
A.J - AT A FREAKING WEDDING. WHO PLANS A WEDDING IN THE FALL. UGHHHHH 38-10 FSU
New Guy - Carefully taking in the game day atmosphere for his next post. 31-17 FSU

Things stayed the same during the bye week. And with no one picking the Eagles this week, it will come down to who is the closest. Or if BC pulls this off we are all in for a world of hurt.

Got any good pictures of the Eagle? Got an embarrassing picture of yourself with an FSU fan? Want a picture of your tailgate or group of friends featured on next week's Final Thoughts? Make sure to put up your photos on Facebook, or if you want you can email them directly to me at bchysteria at gmail dot com. Please make sure you understand that by emailing them to us you are giving us the right to use your picture on our posts!

Are the BCI writers just being NEGNAN or do the Eagles actually have a chance? What are your thoughts on the game? Leave them in the comments!