Which "Inferior" ACC Program Will Knock Off The Seminoles This Season?

This is why we can't have nice things.

Share All sharing options for: Which "Inferior" ACC Program Will Knock Off The Seminoles This Season?

It happens every year.

Every year the Florida State football program comes into the season with lofty expectations. Things seemingly start off on the right foot. A 69-3 victory over Murray State here ... a 55-0, running clock shortened bludgeoning of Savannah State there. Drop 52 on hapless Wake Forest (#TheRivalry) and then win a shootout against Clemson to start the year a perfect 4-0.

Then, seemingly out of nowhere, along comes a team to derail Florida State's BCS National Championship aspirations. And this happens. 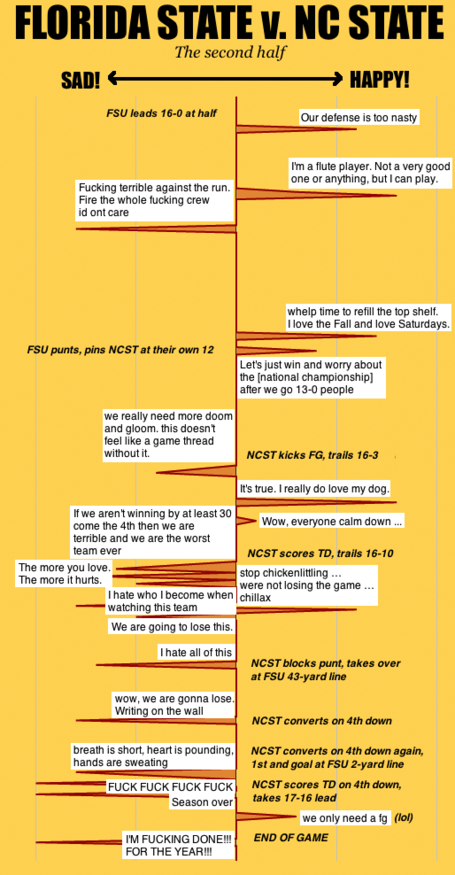 This is why we can't have nice things.

Seriously though, there are few certainties in life -- death, taxes and Florida State losing to one of these ACC "freeloaders" (Tomahawk Nation TM).

I'm not delusional enough to assume that it is Boston College's turn to knock off the 'Noles given the recent series history. That said, the circumstances certainly line up favorably for BC. Coming off the road trip to USC, the Eagles have a bye week preceding Florida State's September 28 visit to the Heights. While playing a division opponent with an additional week off ... on the road ... sets the Eagles up well, it's not like Florida State has to do much heavy lifting the week before with a home date against "Baby BC" Bethune Cookman. Sadly, that's a bye week for the Noles too for all intents and purposes.

The other usual suspects -- Maryland, N.C. State, Syracuse -- all have to travel to the Doak this season to face FSU, though N.C. State could conceivably catch Florida State looking ahead to the following week's home date with in-state rival Miami. That leaves FSU's traditional thorn in side Wake Forest, when the Seminoles travel to BB&T Field on November 9 to take on the Deacons. Do the Deacs, winners of four of their last seven against the Seminoles (and after having lost 14 straight from 1992-2005), have any magic left against FSU? Or are 52-0 beatdowns the new normal in the FSU-Wake Forest series?