Brutal helmet-to-helmet collision sends the DT to the turf. A torn left patellar tendon will shelve the junior for the rest of the season.

The Boston College football team had managed to stave off the injury bug for the most part through the first three games of the 2013 season. That changed on Saturday, when junior defensive tackle Mehdi Abdesmad suffered a torn left patellar tendon in the third quarter of Saturday's 48-34 loss to Florida State.

On Wednesday, Coach Addazio confirmed that the 6-foot-7, 278-pound junior will miss the remainder of the season.

On a 1st-and-10 from the FSU 42, Florida State quarterback Jameis Winston rolled right to avoid pressure from Boston College linemen Jaryd Rudolph and Kasim Edebali. Abdesmad, also in pursuit of Winston but much further away from the ball, runs laterally from left to right to chase the QB. Winston throws the ball away; the pass intended for Rashad Greene.

While pursuing Winston, Florida State junior tight end Nick O'Leary breaks his route and decides to try to slow Abdesmad's pursuit. O'Leary stops, leads with his helmet and pops Abdesmad with a helmet-to-helmet hit. Abdesmad awkwardly falls to the turf and remained down for a good minute before limping off the field with the help of Addazio, the training staff and linebacker Tim Joy.

Here is the play in question, with Abdesmad (45) moving right to left and O'Leary (35) coming into the frame from the left: 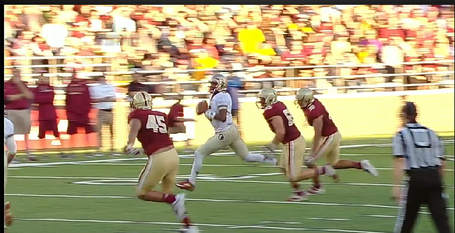 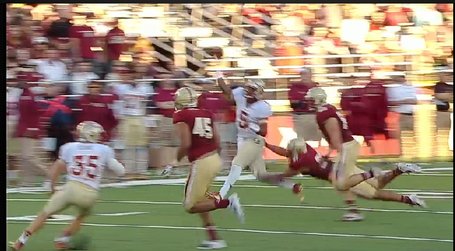 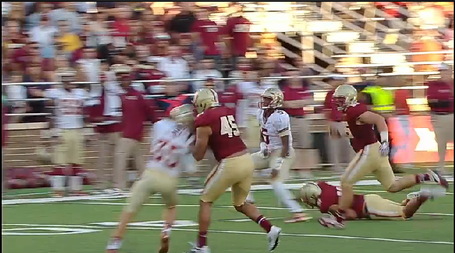 Replays clearly showed that O'Leary launches helmet-first and pops Abdesmad mid-stride in a nasty helmet-to-helmet collision, but the refs apparently did not see the hit as the infraction was away the ball. The ESPN broadcast team even displayed an infographic explaining the rules for the NCAA's new personal foul targeting penalty while Abdesmad was being looked after. The camera crew follows O'Leary jogging off the field and continues to focus on him as he looks on from the Seminoles sideline.

Regardless of intent, the loss is a huge blow to an improved Boston College defensive front under first-year defensive coordinator Don Brown. Abdesmad had started at defensive tackle in each of the first four games this season and will finish the year with 17 tackles, 3.5 tackles for loss and 2 sacks. With Abdesmad out, the Eagles will turn to senior DT Jaryd Rudolph, listed atop this week's depth chart as starting left tackle. True freshman Truman Gutapfel will back up Rudolph.

Abdesmad will likely not qualify for a medical hardship waiver under NCAA bylaws, having played in more than two games and more than 20 percent of the team's completed games.