Predictions, beer selections, Public Enemy and some thoughts to ponder going into Saturday's matchup with the Army Black Knights.

Share All sharing options for: Boston College vs. Army: Final Thoughts and Predictions

Now if I were to ask you a week ago if the build up to the Army game would be this exciting, would you have believed me? Of course not. But then again, most of us didn't account for how unbelievably dysfunctional the US government has become. But here we are. Brad Bates and Army AD Boo Corrigan worked their tails off to make sure this game happened, and we need to thank them, by drinking lots of beer, having a handicapped inflatable mascot, and dedicating an old school rap song to them. Who is ready for some football? I know I am.

How will Truman Gutapfel and Jaryd Rudolph do filling in for Mehdi Abdesmad's large Canadian shoes? What role will true freshman Myles Willis play this weekend? I will continue to ask, will any other non-Alex Amidon receivers do anything this weekend? Can Willis and Spiffy Evans continue to make big plays on special teams? How will Justin Simmons do starting this weekend? Is it possible for Andre Williams to top his 99 yard run from last year's game? Will Steven Daniels continue to improve?

How many points can BC put up against a suspect Army defense? Can BC please shut down the triple option defense? How will Don Brown's aggressive system do against this type of offense? Has anyone else figured out a way to block out last year's game at West Point? The new live eagle's name will be announced this weekend. What will his name be? If you see a cadet at Alumni Stadium will you thank them?

What To Drink As The Government Does Nothing 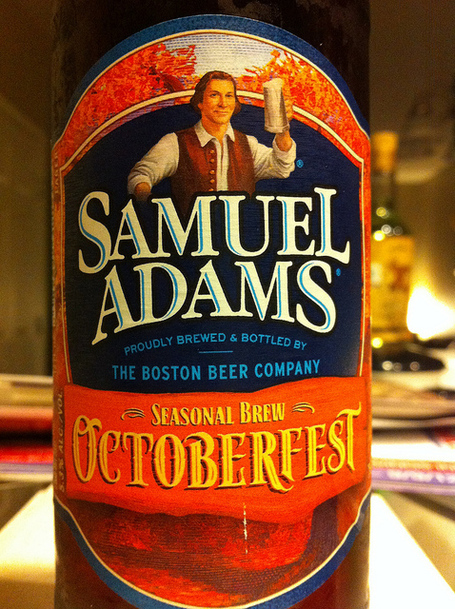 Sam Adam's Octoberfest: There was a few reasons that I chose this beer. First off, it's the first weekend in October so I had to choose an Octoberfest beer. Gone are the fruit nodes of summer, in comes the spices of the fall. Secondly I chose this because the beer is named after Sam Adams, a patriot who fought against a government that wasn't serving the people of America. Not to get all political, but sounds pretty familiar to the crap we are dealing with now. Finally I imagine that there are lots of government employees that are drinking these this week as they sit at home without jobs. I am not even a fan of this beer, but it was such a clear choice for this week.

"It's the Army. Whether you're a teetotaler or not buy your nearest cadet a beer, for Christ's sake."

Joe's Drinking Advice for the game:

We are creating a #Shutdown Shot at A.J.'s tailgate this weekend. Pray for us.

CAW CAW! BAWDWIN JUNYOR IS HERE TO CELEBRATE THIS WEEK'S GAMING WITH THE ARMY! I WAS VERY WORRIEDS THAT THERE WOULD BE NO GAMES THIS WEEK BECAUSE I WAS TOLD THAT THE GOVERNINGMENT WAS CLOSED FOR REPAIRS. DID THEY FIX IT YET? I REMEMBER ONE TIME BAWDWIN JUNYOR GOT A LEAK, I WUZ BERRY BERRY NERVOUS. THE TRAINERS SAID THEY SHOULD PUT A PATCH ON MY HOLE, WHILES THE STUDENTS SAID THEY SHOULD GLUE THE HOLE SHUT. THEYS ARGUED ABOUT IT FOR DAYS WHILE I DEFLATED INTO A PILE OF CLAWS, BEAK AND RUBBER. I CRIED AND CRIED, BUT THEY JUST KEPTS ON FIGHTING! CANTS WE ALL JUST WORKS TOGETHER? DO I NEED TO RUN FOR SENATORS OF MAXACHUSHOECHETTS? BAWDWIN JUNYOR FORS PRESIDENTE!

NOW THAT THE ARMEE IS HERE. (THEY PROMISEDS THAT THEY WOOD LEAVE THEIR BAYONETS AT HOME) I AM HEAR TO GIVE MY PREDILECTIONS. I REMEMBERS LAST YEAR THAT FRANK SPAZIANI SAYS TO BAWDWIN JUNYOR HE SAYS "WE CAN BEATS THE ARMY, WE DONT NEED TO WATCH NO GAME FILMS!" SO INSTEAD OF PRACTICING WE WATCHED REPEATS OF MIAMI VICE AND ATE POPCORNS. WITH LOTS OF SALT AND BUTTERS OF COURSE! COACH DAZZIO IS SO DIFFERENT THOUGH. HE MADE BADWIN JUNYOR RUN SOMETHING CALLED THE TRIPLED OPTION. I THINKS BEECEE IS GOING TO BE READY. EAGLES WIN 62-6!

Gametime Song of the Week - Public Enemy- Shut 'Em Down

Originally I was going to go with "Fight The Power" but at the last minute I remembered this song and it was way too perfect. Even you old folks that no nothing about rap should know about PE. They feature Chuck D, who speaks about world events all the time, and Flavor Flav the lunatic who wears the Viking hat and stupid large clock. They are also in the Rock and Roll Hall of Fame, which is pretty cool. If you hate rap that is about money, girls and drugs then PE might be more up your alley. They rap about injustice, black oppression and some of the political crap that got us into the mess we are in now. Public Enemy is not so much the rap music that you would want to listen to at a party or club, but more the kind that you sit, listen and learn. Seriously, it can be pretty deep. Just as a warning, the video has some pretty graphic scenes in it, but it is well worth watching.

No one was really even all that close in last weekend's predictions with Brian being the closest at 26 points off the final score. Joe, Dan and myself were way off, and no one has seen or heard from Conrad in a while so he ended up with a fat zero.

Got any good pictures of the Eagle? Got an embarrassing picture of yourself with a cadet? Want a picture of your tailgate or group of friends featured on next week's Final Thoughts? Make sure to put up your photos on Facebook, or if you want you can email them directly to me at bchysteria at gmail dot com. Please make sure you understand that by emailing them to us you are giving us the right to use your picture on our posts!

How excited are you that BC is actually playing this weekend? What are your thoughts on the game? Leave them in the comments!