Can BC win a big one at Fenway Park?

It's finally here, the much awaited matchup between the Boston College Eagles, and Notre Dame Fighting Irish. The latest installment will be right in BC's backyard, at Fenway Park. There is a lot on the line here for Notre Dame as they push to make the CFB Playoffs, while BC wants to take on that role of spoiler, and ruin another ND season. Let's check out our final thoughts and predictions.

1. "Will" ND Be Able To Hit That Homerun Pass? Two weeks ago it only took one pass from NC State's Jacoby Brissett to complete screw up the game for the Eagles. After a 76 yard pass BC was swimming up hill for the remainder of the game. They can't afford to do that against ND, especially in front of a hostile crowd at Fenway Park. This is concerning because Will Fuller is possibly the best WR BC has faced all season. They can't give up a big chunk play against ND.

2. Run The Offense Like a Two Minute Drill: It took until the end of the game against NC State for BC to get their offense flowing. Much of that had to do with NC State laying off into a softer coverage zone, and less pressure on John Fadule. But there is something to be said about the mentality of that offense. Be aggressive, ND is probably the worst offense BC has played in a while, push it, make them uncomfortable.

3. Limit The Pre-Snap Carnage: Steve Addazio has taken pride in his teams in the past who have limited the mistakes they have made, especially in regards to penalties. This year the presnap penalties have been especially brutal. Delay of game, illegal formation, false starts etc. Play excited, but don't play stupid.

Pour Out A Little Liquor For This Season With... 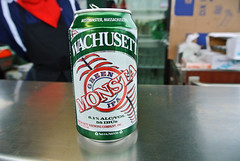 Green Monsta IPA: Full disclosure here, I don't really even like this beer all that much. I find Wachusett's selection to be kind of bland, and nothing to write home about. Just like BC's offense this year. Hi-yooooo! If all you non-Massachusetts find this in a multipack you will surely want to wretch. It's the Boston sports pack, including Beli-Chek ale, Black and Gold Lager and Larry 33 IPA. I believe this is a beer you can actually get inside of Fenway Park as well, for the low price of around 11 dollars.

WRDSX: Welcome to Fenway Park, where we are here to talk about David Ortiz's impending retirement, the reactions of the coaches, and of course the reaction of the fans....Folks, I'm not sure what this is, there appears to be a football field set up here, maybe it's an elaborate stage for the newest Dropkick Murphy's tour "HEY WE ARE IRISH AND FROM BOSTON SO SCREW YOU" . There seems to be an inflatable bird walking by, let's see if he knows.

WRDSX: Are you here as Wally's newest friend or something?

Baldwin Jr: NO SILLIEST OF SILLYS! I AM HERE FROM THE BEECEE! WE ARE CELEBRATING SHAMROCK SHAKES! MMMMMMMMMM

Baldwin Jr: YOU WOULDNT BE'S THE 1ST! NO MY SCHOOL, THE MOST ELECTRICAL, THE MOST AWED INSPIRATIONAL TEAM IN THE WORLD. STEPHEN ADDAZIANO'S BEECEE EEGLEZ ARE TAKING ON THE NOTED DAMES FLYING IRISH!

WRDSX: In football? In your own backyard? Wow! What a score by BC!

Baldwin Jr: OH NOS THIS IS A FLYING IRISH HOME GAME. BUT DATS STILL COOL. WHEN BEECEE WINS I PLAN ON STEALING THE GOALIE POSTS AND RUNNIGN UP COMMIE AVE WITH THEM BACK TO BEECEE

WRDSX: It's a ND home game? Wow, what an insult to BC!

Baldwin Jr: SILLIEST OF REPORTERS, I WAS IN THE NEGOTATIATIONS. IT WAS GOING TO BE EITHEREST US OR THE UNIVERSALITY OF TAXACHUSETTS, OR THE PUPPIES FROM CONNECTING-CUT.

WRDSX: You heard it here first, this weekend, BC-Notre Dame in a matchup that just shows how irrelevant BC is! What a joke this school is! On sports at 6pm, "Tom Brady, will the GQ cover shoot help or hurt his brand"? and also you won't believe what Rob Gronkowski eats for lunch!

Baldwin Jr: HEY JERKO THIS IS IMPORTANTEST OF GAMES, AND I THINKS BEECEE WILL WIN! GO EEAGLEZ! CAW CAW!!!

House of Pain- Jump Around Remix: A Boston area rapper, with Irish roots, and a song that you hear at possibly every high school dance and football game in the 1990's. Just like my beer of the week, and Notre Dame, I don't like this song either.

Jeff and Joe are the only two picking the Eagles this week.

Jeff: ND 17 - BC 14. Wake played ND closer than final score indicated, UVA almost had Notre Dame earlier this year and they're not very good either. I'll be at the game of course because who knows if or when BC will play ND at Fenway again.

A.J.: 28-17 ND. BC may keep it close to start, on some good defense, but ND will hit the big plays late and of course BC's offense will have no answer. Watching the game from my couch.

Grant: 27-3 ND. I will be watching from my couch until I get bored.

Joe: 21-14 BC WHY NOT. I'll be watching the BC-UNH hockey game on TV and flipping the channel over while covering my eyes

Dan: Notre Dame 38. Boston College 34. I can't justify taking BC to outright win but I can justify them getting after this team. I just don't think the Irish are that great defensively. In other news I'll be watching it while in full recovery mode that comes from returning from vacation.

I wanted to make it 76-0 to make a point, but it needed to be somewhat believable. I'll be on my couch at home, probably watching something else.

Coach: Notre Dame 34 BC 13. Was hoping early in the season that this would be the big referendum on the 2015 Eagle season, now it's just something to endure..along with all the trimmings and trappings that are coming with the Notre Dame take over Boston. Is it over already? Watching from a secluded bunker after being held hostage for $400 tickets and refusing to pay the ransom.

Anticipated GIF For This Game:

Laura, AKA cat lady, came really close to picking the score right on the nose. Jeff fell back two spots after he selected BC to win.

Are you already sick and tired of all the Fenway Park talk? Do you think BC has it in them to pull off another miracle upset against the Fighting Irish? Or is this just going to be another game where we complain about the coaching and the mistakes that let this season get away? Leave your predictions and comments below! Go Eagles!