Share All sharing options for: Boston College vs. Duke: Final Thoughts and Predictions

Has a fan base sounded more miserable after a win against a quality opponent than BC fans sounded this week? It's been a tough week filled with all sorts of question about the team, and what the rest of the year holds for this group. Now it's off to hurricane alley, where the very talented Duke Blue Devils await Steve Addazio and his dudes. It's the first away game for the Eagles, and a whole new slate of challenges face a team that has been hammered with injuries. Let's preview the final thoughts on a very important game.

Will Steve Addazio focus more on Troy Flutie this week and go with the power running game? Or will he try and keep Duke off balanced with Jeff Smith and the option? Or will he again go with both? How will the injuries to Myles Willis and Marcus Outlow change the gameplan? Will Tyler Rouse be the feature back this week? How will the shuffled offensive line handle the dynamic safety Jeremy Cash? Can the Eagles find a way to get Sherman Alston, Bobby Swigert, David Dudeck and Elijah Robinson into the game? How will the loss of tight ends Louis Addazio and Michael Giacone alter the blocking schemes? On defense can Harold Landry continue to build his reputation as one of the best defensive ends in the ACC, or dare I say the country? Can Mehdi Abesmad continue to play like an animal? Given the weather will there be much of a passing game for John Johnson, Isaac Yiadom, Justin Simmons and Kamrin Moore to defend? Or will they be stuffing the box to stop Shaq Powell and Thomas Sirk?

Steve Addazio must have done some thinking this week, has he settled on an offensive gameplan this week? How will the weather affect the passing game if we have one? How about the option? Kicking? Will there be more than 20k Duke fans at the game if it gets nasty? Is this going to be a repeat of Wake Forest - Virginia Tech from last season? Will either team hit double digits? Is there anyone out there that is betting the over on the spread? 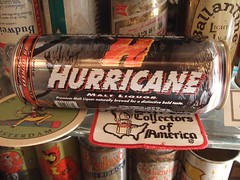 Over the years readers on this site (and Dan Rubin) have criticized my beer selections on here, accusing me of being a "beer snob". Well, don't tell me that I don't listen to you all, because this week I chose a cheap as crap, tastes like crap, makes you feel like crap MALT LIQUOR BABY. In honor of the upcoming Hurricane Joaquin Phoenix, I looked up Hurricane beers and found this bad boy. It's made by Anheuser Busch, so you know it tastes terrible, and probably would only cost you a buck a can. WHAT A BARGAIN. However, there were other beers named after Hurricanes, what sold me on this "beer" is the descriptions on Beer Advocate:

Clean but strong alcohol aroma, smells of really cheap vodka. Anyone remember Mr. Boston Vodka?
Considering what this is and how unbelievably cheap it is, it's a miracle. Like Jesus Christ himself turned piss into golden barley pop.
All said and done this beer is great. If youre homeless like me
One of my buddies described it as "liquid ass," and I don't think he was far off.

And as always. ENJOY!

BALDWIN JR: CAW CAW! AY JAY PUT ME ON THE ROADZ EARLEE THIS WEAK TO GET REDY FOR THE UPCOMING FOOTYBALL GAME AGAINST THE DUKIE DOOKS. HE GAVES ME A SPECIAL MISSIONS, AY JAY SAYS TO BAWDWIN JUNYOR HE SAYS "BALDWIN JUNYOR I'M TOO BUSY LISTENING TO RAP MUSICS AND WRITING INS AN ECHO CHAMBERS. FINDS ME THE BIGGEST DUKE FAN YOU CAN FIND". WELL BAWDWIN JUNYOR TAKES EVERYTING VERY SERIOUSLY, SO ON MY WAY TO DUKIE DOOK I FOUNDS SOME TAR HEELED FANS AND THEY TOLD ME JUST WHO'S TO FIND! DOOOK VITALE!

Dick Vitale: OHHH ARE YOU SERIOUS IT IS SHOWTIME UP UP AND AWAY BABAYYYY. YOU GOT MY MAIN MAN DAZ BABAY. HES BALDER THAN I AM! AND SPEAKING OF BALD WE GOT BALDWIN JUNIOR. THIS IS AWESOME WITH A CAPITAL A. ITS BC. ITS THE DUKIES. HERE WE GO BABAYYY

Baldwin Jr: OH MY GOODNESS YOU SPEAKS JUST LIKES ME! WOW, AND YOU WORKS FOR THE ESPN, SO MAYBE THERES A CAREER FOR THE BAWDWIN JUNYOR! EYE HAZ HURD THAT THERES GOING TO BE A HURRY-CANE, WUT'S THAT MEEN FOR BEECEE AND THE DUKIE DOOKS?

Dick Vitale: IT'S BREEZY BABAY! ITS GONNA BE WET BUT YOU KNOW THAT CANT STOP THE CRAZIES! JOAQUIN? JOAQUIN CANT STOP THE DUKIES BABAY! THIS IS DUKE! AND HEY... I LOVE DUKE.

Dick Vitale: OH ARE YOU SERIOUS??!! THE PUNTER IS GONNA KICK IT AND ITS GONNA BE THE ELEVATOR MAN! SKYS THE LIMIT WHEN YOU GET OUT THERE BABAY

Baldwin Jr: WOWZERS YOUS GET SO ENERGYIZED! I WISH THIS COULDS GO ON ALL DAYS AND NIGHT! WUT ABOOT THE QUARTERED BACK?

Dick Vitale: AND THEN YOU GOT THE MAN IN THE MIDDLE. MY MAN THOMAS SIRK. SIRKIE IS ONE OF THOSE TRUE TALENTS. YOU CANT STOP HIM YOU CAN ONLY HOPE TO CONTAIN HIM! A HURRICANE? MORE LIKE THE WIND WHEN SIRKIE BLOWS RIGHT BY BABAYYYY

If you don't like my song choice, here is a YouTube Playlist of The Doors (Riders On The Storm, get it?)

Mobb Deep- Quiet Storm. One of the most under rated rap groups of the 90's, Mobb Deep the duo of Prodigy and Havoc are from the streets of NY. Through violent imagery and simplistic beats, the two made a ton of records, but never really hit it big. Quiet Storm would probably be one of their biggest songs. They completely fell off the map after Jay Z exposed Prodigy as a ballerina dancer before he was a rapper. Of course I selected the song because it's the perfect song title for this week. It's going to be a Quiet Storm at the game. Not much hoopla, lots of rain, and a quiet storm of little to no offense. Be ready.

There are two writers this week that think the Eagles have a chance, the rest are all haters.

A.J -  Actually going on a bar crawl in Salem. Hopefully I can convince 10 Boston area bars to turn on NESN+, not optimistic. Duke 10 BC 7

Grant - BC football on my TV, women's hockey on my laptop, giving the ladies a measurable chance of outscoring the football team on the weekend. BC 17, Duke 10. Seriously you guys.

Joe - Watching via laptop from the stands at Conte Forum while awaiting BC hockey vs. University of New Brunswick   17-13 Duke.

Laura B - I will be in class because apparently in law school it's okay to schedule makeup classes on Saturdays. And then I will be rushing straight to Conte, obviously. 21-10 Duke.

Arthur - Duke 14 BC 8. Don't ask me how BC got to eight. I will be with Joe at Conte watching some #cawlidgehawkey

Coach - One of the many swing games of the 2015 season. So many factors going against the Eagles at this point. Injuries, inexperience, first road game with that very young team. Defense travels though and it definitely keeps BC in the game, but not enough to win, especially considering Duke is also in the top 10 in the country in most statistical categories.

Watching on my couch...making my famous gumbo! Duke 17 Boston College 7

AJ continues to pick like an idiot, and wallows in the basement, while Coach and Jeff continue their Titan clash at the top. This is going to be a huge game for them, if BC wins Jeff will open a large lead for first place, but if Duke wins Coach jumps into 1st.

We have a cool new widget to introduce, where you the fans can predict the score of the game. Click below, and we can see how Duke fans and BC fans differ in their predictions. And of course leave your predictions in the comment section.