Our weekly look into enemy schadenfreude

Share All sharing options for: Tears Of Unfathomable Sadness, Volume 2

We didn't create this series just to make fun of UConn. They just provide so much material.

First off, I have some crow to eat. Last week, I came out and said I wanted to be the first to predict that UConn would lose to BYU by 5 scores. As it turned out, they only lost by 4 scores. Good for you guys.

The similarities between UConn and UMass are endless. Both are state schools, both are a waste of money to attend, and both provide, at graduation, free fuel for a warming trashcan fire for your winter residence in downtown Hartford/Lowell. And of course, both have awful football teams that force their students to ride a bus for an hour just to watch their weekly curbstomping. The result is what you see above.

Poor UConn. They're going through exactly what we just went through. After the program's peak of being 8-5 and unranked, Randy Edsall cashed in his chips and bailed on the team faster than you can say "AAC." UConn was forced to hire Boring McAwful for 3 seasons before kicking him to the curb and hiring the coach we didn't want.

Now, they're in recovery with their new coach, hoping to rise from the ashes of a coach's reign who couldn't leave town fast enough. But week 1 against BYU was a rough start.

Before anyone thinks that making fun of the UConn student section is us throwing stones in a glass stadium, here's a screenshot from our game against Maryland in 2012 where we were 1-6: 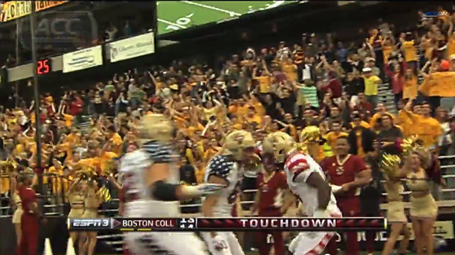 Okay, just one more for UConn this week.

Last season, as you might recall, UConn lost pretty handily to FCS Towson, of all teams, at home in East Hartford. As though last year just wanted to provide just one last kind in the junk to the Huskies, Towson went and lost to Directional Bumf*** State in this season's opener. And not just any Directional Bumf*** State: Central Connecticut State University. Poor UConn isn't even the best team in a state that has only one FBS team.

And lastly, the Wall Street Journal came out with its Grid of Shame this week. It's a plot of where each FBS team stands in talent ("Weakling" to "Powerhouse") and likability ("Embarrassing" to "Admirable"). Just about every team seems correctly placed.

BC is a bit below average in talent but among of the highest in the country in likability. Most of the very talented and very likable teams pass the smell test. Teams like Stanford, UCLA, and Clemson (Hi Clemson! /Waves at Clemson).

The explanation for the likability rankings are great:

Ah, the "ick" factor. Despite some residual uneasiness some fans might have in playing Penn State after the recent events in Happy Valley, I can't imagine why Penn State would be ranked dead last in likability.

Among the many teams that are both less likable and less talented than BC are UConn (naturally), and Wake Forest (#TheRivalry). But two of our recent opponents really stick out.

New Mexico State is one of the absolute worst and least likable teams in America. I assume this is because of #Aggievision.

And finally, our friends at Amherst, the UMass Minutemen. Stuffed near the bottom in the "embarrassing" ratings, and third from last in "weakling." But I'm sure their new head coach will Whipple them into shape, right?