Winning those hearts and minds.

Share All sharing options for: Boston College vs. UMass Football: Battle Of The Bay State Already Decided On Facebook

With the college football season right around the corner, the real estate site Estately took Facebook data to determine who everyone is rooting for on a state-by-state basis. As Boston College opens its 2014 campaign against in-state Massachusetts in a game tabbed as the Battle of the Bay State, this information seems extremely IMPORTANT and topical.

So which program owns the state of Massachusetts? Glad you asked: 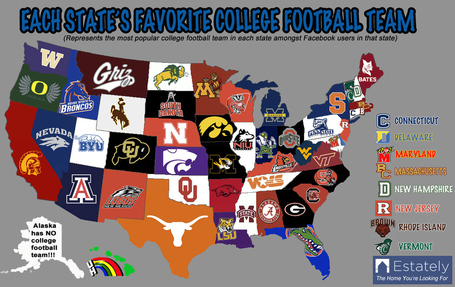 When it comes to Bay State bragging rights, Boston College is still the most popular college football program in the state. Of course, this will undoubtedly change in a few years when UMass starts dominating ... whatever Conference they hAppen to be A member of after leaving the MAC in two years. So enjoy it while it lasts, Superfans.

Overall, few surprises on this map, with many of the state's flagship schools ranking as the most popular program in the state.

It does get a little weird with the rest of New England though. State schools in Maine, New Hampshire and Rhode Island all participate in the FCS' Colonial Athletic Association, but the most popular teams in those states happen to be Division III Bates and Ivy League members Dartmouth and Brown, respectively. Vermont's favorite team is the Castleton State College Spartans, which I had to look up, since UVM stopped fielding a varsity program in 1974.

Not a good look, you guys.

Then again, this map might better explain what's going on throughout the rest of New England regarding interest in football: 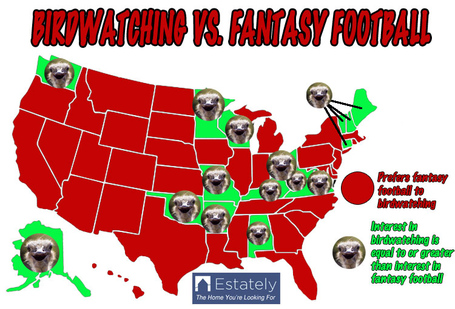 Estately also ranked the top ten most popular college football teams across the country; a list that includes Pittsburgh at #5 -- without being the most popular team in Pennsylvania? -- and Maryland at #6. Suddenly, the accuracy of this data seems highly suspect.

Most of the other Estately maps are NFL-centric so go check them out too. Looks like Andre Williams is right, Rex Ryan, so you can go back to focusing on missing the NFL playoffs for the fourth straight year.