So you're saying there's a chance?

Last month, the Golden Nugget released five lines concerning Boston College football for the 2014 season. The lines were noteworthy because Boston College was a significant underdog in all five games, including a 9-point home underdog to visiting Pittsburgh in week 2.

Sunday, the Las Vegas Hilton's numbers came out, but there's only one BC game of note -- said Friday night home opener vs. Pittsburgh. The LVH's early lines are considered more reliable than the Golden Nugget's, in part because the LVH takes larger bets.

Back in June, New Guy called shenanigans on the Golden Nugget's early Pitt @ BC line:

A nine-point spread in June is all but asking for even money against Pittsburgh, which at this point is really a pick 'em game until we learn more about both teams.

And wouldn't you know, the LVH has moved that line sharply in the Eagles' favor, to just BC +3.5. That early line seems much more reasonable considering the talent that Pitt loses one of if not the most dominant defensive player in school history and an NFL Draft pick quarterback, and the fact that the Panthers will be traveling to the Heights on short rest (though BC will be "traveling" to, I suppose).

Here's the other movement on the early lines on this year's ACC games:

The Las Vegas Hilton also hands out odds for over/under season win totals a well as conference championship odds. No over/under win total for BC just yet, but there are lines for several of the Eagles' 2014 opponents -- all of which BC will be a heavy underdog against: 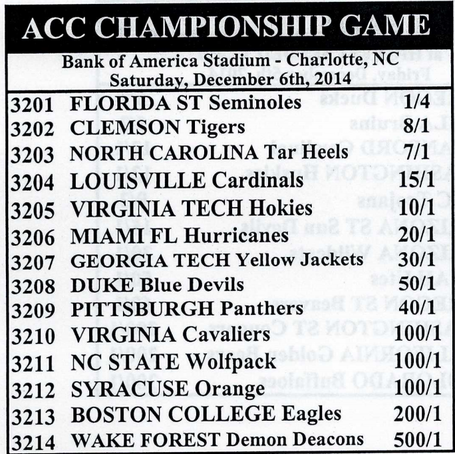