Conference could have up to 13 bowl eligible teams.

Several interesting bowl developments over the weekend that cloud the ACC's increasingly muddled bowl picture. Let's get to it.

The biggest development over the weekend was Stanford's demolition of Oregon on Thursday night, which knocked the Ducks from the ranks of the unbeaten and cleared a path for Florida State to get to the BCS National Championship Game. From here on out, it's pretty simple, really. If the Seminoles win out, they are in. Things never really play out as you would like them with the BCS, but it's hard to see a dominant Florida State dropping a game with a schedule that includes Syracuse (FSU -38), Idaho, a Florida squad with an offensive offense and whichever program the Coastal DIvision offers up as a sacrificial lamb (which, in the most #goacc development ever, can still be Duke). 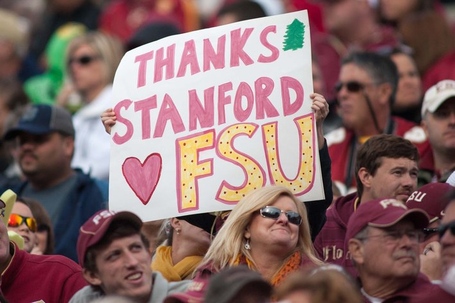 Florida State in the BCS National Championship Game can open up a spot for the conference in the Orange Bowl, but the conference still has work to do. Clemson (#8 in the latest BCS standings), is best positioned to become Florida State's replacement in the Orange Bowl, but getting tripped up in one or both of Georgia Tech (-10) or at South Carolina could put the ACC's hopes of landing two in the BCS in jeopardy.

While BCS bowls often try to replace BCS National Championship Game participants with teams from the same conference, Clemson will still have to finish in top 14 in the final BCS standings to be considered. Clemson may be able to weather a loss at South Carolina (#10 in this week's BCS standings) and still end up in the Orange Bowl, but a loss to Georgia Tech this weekend would be devastating to the conference's hopes of landing two in the BCS. Miami is the only other ACC team ranked in this week's BCS standings, but is on the outside looking in at qualifying as a BCS at-large at #23.

Losses by BYU (20-10 at Wisconsin) and Notre Dame (28-21 at Pitt) ended any hopes of either FBS independent landing in a BCS bowl game this season. The former was a bit of a long shot going into the weekend anyway. The Cougars, which have already accepted a bid to play in the Fight Hunger Bowl, needed to finish the year 10-2, hope for losses by both Northern Illinois and Fresno State and that the program's national following and strong travel rep would land BYU in one of the Fiesta Bowl, which has last pick of the at-larges. While the thought of watching a team that lost to Virginia qualify for a BCS at-large is absurd at face, this would have been huge for the ACC. BYU landing in the BCS would have opened up another bowl slot for the ACC with the Fight Hunger Bowl, a spot it's looking like the ACC will need more and more.

The good news is that another undeserving Notre Dame squad will not land in the BCS this season. The bad is that the Irish will now be thrown into the bowl waiting room mix, hoping that another conference doesn't fill its bowl obligations. Notre Dame will likely have company in the bowl game waiting room, along with one or more ACC programs. More below.

The other interesting development is that ACC n00bs Pitt and Syracuse sprung minor upsets over Notre Dame and Maryland, respectively, drawing both first-year ACC programs within a win of bowl eligibility. The conference can now qualify as many as 13 teams for bowl games if things break perfectly which, weird.

How To Get There: After getting off to a fast 4-0 start on the year, including a 38-0 win over West Virginia, the Terps have lost four of five and have been stuck on five wins for a month now. The latest setback was a 20-3 home loss to Syracuse in which the Maryland offense crossed midfield seven times to score just once. Bowl eligibility may very well come down to the regular season finale against in-division rival N.C. State. I'll still go ahead and predict a bowl for Maryland this week, but if the injury-ravaged Terps play like they have been playing over the last month, missing out entirely is not out of the question.

How To Get There: Pitt took a big step towards bowl eligibility in the Panthers first season in the ACC with a 28-21 upset victory over Notre Dame. From here, Pitt needs just one win over its final three games of the year to qualify for a bowl game NOT located in Birmingham, Alabama. With three toss up games over the last three weeks of the year -- the point spread on each of Pitt's remaining three games will likely be no more than a FG either way -- Pitt's quest for bowl eligibility will arguably be the most exciting down the stretch. I think Pitt gets there, just not as you likely think they are.

How To Get There: BC would be best advised to get this out of the way this weekend -- at home, on Senior Day, against an N.C. State squad that has lost five straight, six of seven and needed a last-second FG to top FCS Richmond. The Eagles don't want to go into the final two weeks of the season needing one more win, on the road vs. peer programs in games that shouldn't be more than a 3-point spread either way. This week I've got BC beating N.C. State and @ Maryland but falling to @ Syracuse to finish the year 7-5, 4-4 ACC. That'll be enough to crack the ACC's bowl lineup and not join Notre Dame in the bowl game waiting room.

How To Get There: Syracuse is going to need to do more than bring that "northern football" down to Tallahassee this weekend if the Orange hopes to end Florida State's National Championship hopes. Forgetting about this weekend, because Syracuse +38, the Orange are going to be in two close contests at home needing one more win to reach a bowl game. I still think SU is closer to the team that got waxed by Clemson and Georgia Tech than the one that has won three of four against the injury-ravaged bottom tier of the Atlantic Division. I also think Boston College is the better team this year. This week, however, I'm erring on the side of bowl eligibility for Syracuse. They'll win one of their final two toss-up games, despite Pitt owning Syracuse in recent years (7-1 Pitt since BC left the Big East) and BC being a slightly better team.

How To Get There: Pray. One more loss will keep Wake Forest home for the holidays. That loss will come in two weeks at home vs. Duke, where the Blue Devils figure to be a 7-10 point road favorite.

How To Get There: Things have played out as I expected them to for Carolina over the last few weeks. Even after starting the year 1-5 (0-3 ACC), I had a feeling the Heels, having played one of the most difficult schedules in the country at the midpoint of the season, would still be bowling. North Carolina has now won three straight and needs to win two of its final three games to do just that. It won't be easy, as both the @ Pitt and Duke home finale games are and will likely be pick'em type games. Still think Carolina finds a way even without Renner.

How To Get There:

Adding Maryland, BC, Syracuse, Pittsburgh and North Carolina to the ACC's bowl lineup sufficiently clouds the ACC's bowl picture. Virginia Tech's big win over Miami also muddles the Coastal Division race. My guess this week is Virginia Tech beats Maryland and Virginia to finish the year 6-2 in the ACC. That should be enough to win the Coastal, assuming Duke drops another game between game vs. Miami (Duke +3) and at Carolina. Tech then loses to Florida State in the ACC Championship Game.