Which States Produce The Most College Basketball Recruits?

The Eagles are striking out in the Bay State.

Share All sharing options for: Which States Produce The Most College Basketball Recruits?

Mode Analytics is back with a visualization of which states produce the most current Division I players as a percent of each county's college-aged male population.

The good news is that the ACC's geographic footprint proves to be quite the fertile recruiting grounds. Maryland tops the list, producing 58 players per 100,000 college-age males. Delaware (47) and Georgia (44) also rank in the top five. North Carolina and Indiana also produce quite a bit of Division I talent.

More good news: Mode found that college basketball teams do a reasonably good job of protecting their home turf from other recruiters.

Now for the not so good news. Check out ACC recruiting in Massachusetts: 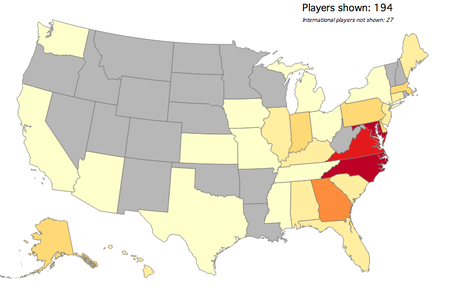 While ACC programs do a good job of protecting its turf more generally, Boston College hasn't done a good job of keeping in-state talent ... well, in-state. A total of eight ACC players hail from the Bay State and just one -- center Dennis Clifford -- plays on the Heights. The others:

Zooming out a bit, Massachusetts produced 56 Division I players out of 344,514 college-age males. Eight play in the ACC, seven in the Ivy League, seven in America East and four in the Big East ... just one at BC.

While appreciating that Donahue only has one spot in the 2014 recruiting class, next year's crop of Massachusetts recruits verbally committed to major conference programs paints an equally grim picture.

While a coach likely can't assemble an ACC-caliber roster based on Massachusetts kids alone, there's no question that there's ACC talent to be had right in Boston College's own backyard. With any luck, the next basketball coach will pick up on Steve Addazio's Northeast fence-building recruiting strategy and keep more local talent in state.