Share All sharing options for: ESPN Once Again Forgets About Boston College

On Wednesday, as part of ESPN's coverage of ACC Operation Basketball down in Charlotte, North Carolina, every 30 to 45 minutes the network would show a map of last year's ACC schools and then what the league looks like now after the additions of Syracuse, Pittsburgh and Notre Dame.

I like maps and conference realignment, so this exercise seemed to be mildly informative to those who may have missed all the musical chairs of the past few years. There was just one problem: Boston College was nowhere to be found. 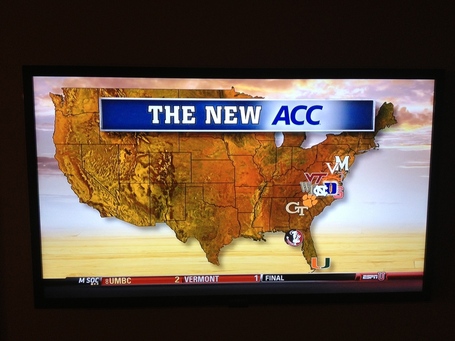 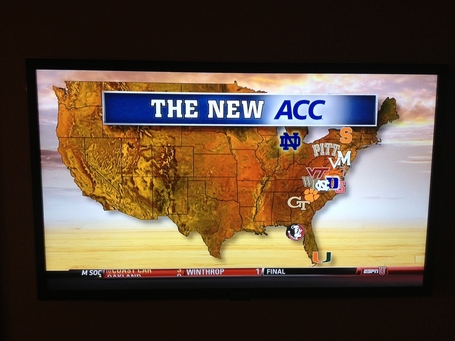 It would be one thing if this was a random occurrence that was quickly remediated but nope. This graphic continued to be displayed on the screen with Boston College blatantly missing every time. A UConn grad must work in ESPN's graphics department because there's no other explanation for missing the ACC member closest to the network's Bristol, Connecticut headquarters.

I did not watch the Worldwide Leader's coverage of Big East Media Day so I'm unsure whether Boston College mistakenly ended up on the map depicting the new Big East instead.