All 5-foot-8 (maybe) of the former Boston College point guard will transfer to the Drake Bulldogs.

Former Boston College point guard Jordan Daniels, who announced he was leaving the Eagles program days before the season opener against Florida International, is transferring to Drake. The 5-foot-9 Daniels will be eligible at the end of the fall semester next season and will have three years of eligibility remaining for the Bulldogs.

Drake is 8-9 this season, 2-4 in the Missouri Valley Conference, but coming off a home win over Evansville. Daniels should be able to vie for playing time next season following the departure of senior guard Chris Hines, himself a Utah transfer with just one year of eligibility.

As a true freshman, Daniels averaged 6.4 points and 2.6 assists for the Eagles last season, starting in 25 games at point. The guard was instrumental in the Eagles' upside victory over 15th ranked Florida State, finishing with a career-high 21 points.

While the announcement that Daniels was leaving the program back in November was stunning, it was generally assumed that the decision was based on the fact that he would be playing a smaller role this season. With the arrival of freshman point guard Olivier Hanlan, who Donahue was high on during the lead up to the season, one had to figure that Daniels' minutes would decrease this season. Hanlan has far exceeded expectations through half a season, leading all ACC freshmen in points per game (13.4) and scoring in double figures in nine straight games (and 14 of 17 this season).

Still, it would have been nice to have Daniels on the roster this season, providing a little more depth and experience to the Eagles' backcourt. And it's never any fun to see a good meme die. 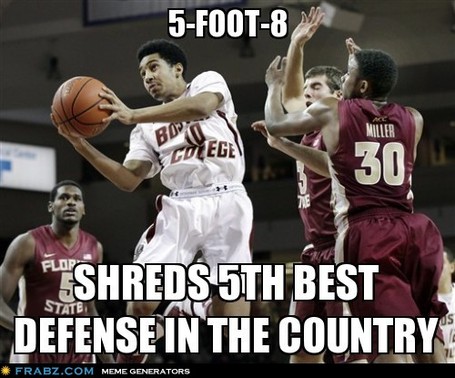 Take care, JD, and best of luck at Drake.