ACC division realignment is all the rage these days. While there is significant inertia to improve on the current division alignment, it's also June. What else are we going to discuss?

Here's one more from The Daily Press' David Teel. Commissioner Teel's plan is a more radical one, one geared towards maximizing the number of marquee matchups at the expense of competitive balance.

This alignment would give the league's TV partners more attractive annual matchups above what they have today -- Florida State-Georgia Tech, Florida State-Virginia Tech and Clemson-Virginia Tech among them. This alignment would also reunite the four Carolina schools, giving the league a return to annual North Carolina-Wake Forest and Duke-N.C. State matchups. Separating the Florida schools for recruiting / exposure / mythical FSU-Miami title game purposes has been cited as a rationale for the current alignment and this continues with Teel's plan.

It would then seem to follow that if the league is separating the two more southern members, they'd also separate the two northernmost members, Boston College and Syracuse, for lack of recruiting / lack of exposure / minimize travel expense purposes. 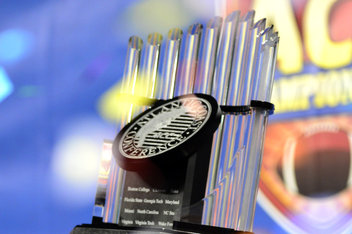 A nine-game, no division scheduling model to keep everyone happy.

The downside to this alignment is a perceived competitive imbalance with the "Atlantic" being much stronger than the "Coastal." My take is this is more of a short-term concern as Miami, Louisville, North Carolina and BC in the Coastal could very well prove a worthy counter to Florida State, Clemson, Virginia Tech and Georgia Tech in the Atlantic. The overall W-L record since 2005 skews towards the Atlantic -- 405-303 (.572) to 337-345 (.494), but that has more to do with the Carolina schools gridiron futility more than anything else, as someone has to take on Duke's 23-73 record.

This plan also lends itself well to improving on the league's final weekend of the regular season. The three ACC-SEC rivalry games are now in the same division (the Atlantic), leaving Pittsburgh-Syracuse and Virginia-Virginia Tech as natural intra-division pairings.

It's less clear-cut in the new Coastal Division, though North Carolina-N.C. State and Boston College-Miami seem like no-brainers. Not for nothing, all three of the BC-Miami games post-expansion have been played on the final weekend of the regular season (Hail Flutie!). Should Wake Forest-Vanderbilt continue to be a thing, by process of elimination that leaves Louisville-Duke, which ... someone needs to be paired with Duke. If Deacons-Commodores to end the year doesn't materialize long-term, the Carolina schools could be paired up leaving one or all three of BC (Connecticut?), Louisville (Cincinnati?) and Miami (USF?) to scrounge up a long-term, season-ending non-conference series.

Boston College would re-pick up an annual game against Miami, while establishing divisional games against like-academic schools in Duke and North Carolina. With the current alignment, of the six ACC schools not BC ranked in USN&WR's top 50, the Eagles play just one of those annually (#BCvsWakeBingo). Sending BC to the Coastal with all four Carolina schools gives the program three more in Duke (no. 8), North Carolina (no. 30) and Miami (no. 44).

The only thing lost from this alignment for BC would be an annual game against Virginia Tech (the value of which, over the past few days, has been debated ad nauseum), an entertaining series between BC-Clemson and a more weighty BC-Syracuse game. Seems a reasonable trade off for the program given what is gained -- an annual game vs. Miami and more academic peer schools on the schedule -- even if most BC games are relegated to ESPN3.