The men's basketball team was (mercifully) off this weekend but the women's team played a critical conference game against Wake Forest. Unfortunately, the ladies coughed up a late nine-point second half lead and fell to Wake Forest, 56-50, at Conte Forum. Senior Kristen Doherty paced the Eagles with 12 points, five rebounds and four assists, while Kelly Hughes had eight points and seven rebounds. Boston College is now 11-10 on the year, 2-5 in conference play. Wake Forest improved to 10-9 and 2-5 in the conference.

In women's hockey action, junior Emily Field scored the game-winner with less than two minutes remaining in the third to lift the seventh-ranked Eagles to a 3-2 win over New Hampshire at the Whitt. Much like the men, the women have begun to put a significant amount of distance between themselves and everyone else in the Hockey East league standings. Boston College is now nine points clear of second place Boston University with six league games to go.

BC now boasts a Spiffy and a Tre:

"It’s kind of corny, but my real name is actually Arnold, and I’m the third in my family," Tarpley explained. "I just thought it would be cool. "That’s where I was coming from. Looking back on it it might have been kind of corny, but it is what it is."

Finally, Tim Epstein goes into detail to explain the NCAA's show-clause penalty though I have no idea why this would be relevant ... 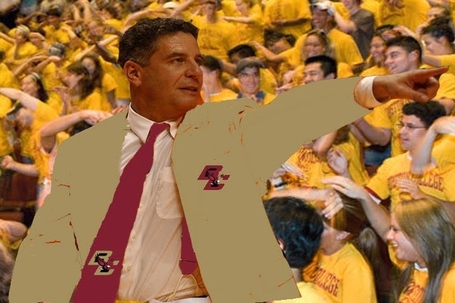