On Wednesday afternoon, the Boston College athletics department unveiled a new look for its website, bceagles.com. The navigation has been simplified and the darker color scheme heavy on maroon and black has been replaced with a lighter gold. 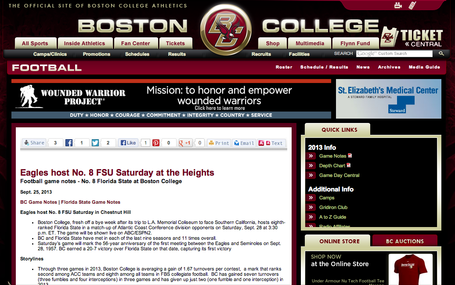 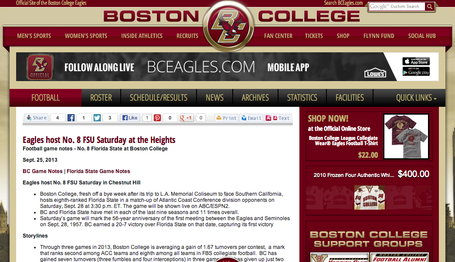 The landing page's background picture of a gold-tinted Boston skyline featuring the Pru and the Hancock Tower is an interesting choice. Wonder if, stealing a page from the Syracuse and Northwestern athletics marketing playbook, this is the start of a "Boston's College Team" marketing campaign. Please no.

Overall, like the changes though it will take me some time to figure out where everything is.

BC football must contain Florida State’s Jameis Winston (The Boston Globe)
Sophomore defensive tackle Nick Lifka and senior fullback Jake Sinkovec are on the mend after both suffered leg injuries in the preseason. "Lifka is making his way back, which is very encouraging,’’ Addazio said. "In addition to Nick, Jake Sinkovec made his way back to practice full-speed, which is great.’’ Addazio said Sinkovec "will be ready to go" against Florida State and Lifka "might be still be one week away, but almost ready to roll, which is great.’’

Georgia-LSU, College Football: Where Have All the Students Gone? (WSJ.com)

There's just one problem: Some students can't be bothered to come to the games. Declining student attendance is an illness that has been spreading for years nationwide. But now it has hit the Southeastern Conference, home to college football's best teams and supposedly its most fervent fans, giving athletics officials reason to fret about future ticket sales and fundraising.

I was led to believe this was a problem at Boston College and nowhere else ...

ACC's 2014 impact freshmen (ESPN) ($)
Boston College coach Steve Addazio is a former offensive line coach, so it’s clear he believes in a strong run game, especially in the cold of a New England winter. Andre Williams, who has been one of the ACC’s surprises through the first third of the season, will move on after the season. Enter Norwich (Conn.) Free Academy three-star running back Marcus Outlow and fellow three-star Richard Wilson (Beverly Hills, Mich./Detroit Coutry Day). Outlow was the first big recruiting win for Addazio, and, with no proven backup to Williams, Outlow could be the starter by the 2014 opener.

Perfecting the formula: How Eagles coach Chip Kelly used New Hampshire as his laboratory to create one of football's most prolific offenses (SBNation.com)
"He had a great way of simplifying things for you," Day says. Kelly explained that all his quarterback had to do was find the one player, the "shade," whose alignment changed the configuration of the defense to either the strong or the weak side. "He says, ‘Ryan, all you have to do is find the shade. If the shade’s strong, it’s under, if the shade is weak, it’s over.’"

Follow Senior Captain Kasim Edebali around the Boston College Campus. Throughout the tour, he visits parts of campus that football players visit daily.

Hockey East Recruiting Rankings (Western College Hockey Blog)
"Boston College has the best recruiting class in the nation -- and it's not even close." Because of course we do.

Breaking Down the Roster for the 2013 USA Hockey All-American Prospects Game (Western College Hockey Blog)
Boston College freshman goaltender Thatcher Demko, a San Diego, Calif. native who will be on the White Team, is the only player in the event who is on a college hockey roster for this season.

WIH Ranked First in Preseason Hockey East Coaches Poll and Second in National Polls (BCEagles.com)
The Boston College women's ice hockey team was chosen as the top team in Hockey East and the second-ranked team in the nation in the preseason polls announced this past week.

Eagles Finish Strong at the BC Central Series Regatta (BCEagles.com)
Over the weekend, Boston College sailing hosted the BC Central Series, an In- Conference Regatta. The Eagles finished strong, placeing third and fifth overall in this regatta, behind Tufts University (1st) and Dartmouth College (2nd) and the U.S. Coast Guard Academy (4th)

"Some neighbors of Boston College are urging the city to delay a vote on the school’s plans to build a new dormitory on Commonwealth Avenue. The residents fear that if the project is approved, they will lose leverage in their quest to reach a long-term deal with the university to provide community benefits."

What if college football teams needed unique nicknames? (SBNation.com)
Fun article from SB Nation's Robert Wheel, even with the dig at BC. Spoiler alert: Boston College gets to keep the Eagles' nickname. However, Clemson doesn't fare so well ...

Clemson's new name: The plain ol' Bengals should suffice, especially since you'll never hear them shut up about how they were good in the '80s.