There is no BC game this weekend, but that didn't stop BC Interruption from discussing the first three games and an outlook of what lies ahead.

It's a bye week for Boston College this week, booooooo, but that doesn't prevent BC Interruption from bringing you the hard hitting news like what beer to drink, insane ramblings from a brain damaged inflatable bird, and some dope old school rap. We are now a quarter of the way through BC's schedule, and sit at 2-1, which is possibly the best outcome you could expect given the shape and depth of this team. Most importantly the Eagles have an ACC win under their belt, something that took them until late October to do in 2012.

There have been some positives around this team so far this season. The defense looked strong against Villanova and Wake Forest, but got killed against USC, but a lot of that was because the offense couldn't stay on the field. Andre Williams has looked like an every down back, and will be more than serviceable as long as he stays healthy. Don Brown has been a great hire. And of course there is the best news of the year, the BAMF Eagle, who's name will be revealed during the Army game in October.

But there are still a ton of questions moving forward, let's take a look at some of them.

It is pretty clear that Chase Rettig does not have the weapons to be a shotgun, air assault QB, what should his role be for the rest of the season? Will this offensive line improve next weekend against a stout Florida State defensive line? And if not, will they be ready in time for Virginia Tech? Is there a legitimate second receiver on this entire roster? How about a tight end? Are teams going to watch the USC game and just bracket Alex Amidon all game and just dare Rettig to throw to one of the other receivers? Will Tajh Kimble return any time soon? Will the third down defense improve? Will Kasim Edebali and Mehdi Abdesmad continue to improve, or will they disappear again like they did against the Trojans?

BC has a murderer's row of opponents coming up with both FSU and a trip to Death Valley coming up in the next three weeks. Can BC make it a game against either of these opponents? How will the Eagles fare against teams they should have a chance against (N.C. State, Maryland, Syracuse etc). Will they actually make a bowl this year? If they don't, how will that effect the 2014 recruiting class? How will Steve Addazio continue to adjust to the personnel he has in front of him? Why did Boston College schedule Elon?

What To Drink As You Watch College Football On Television: 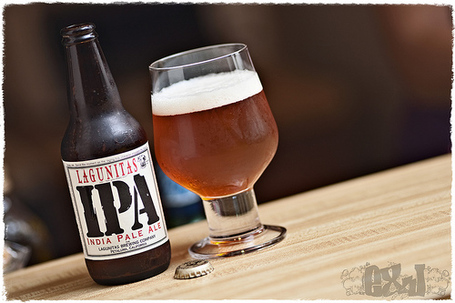 Lagunitas IPA: There is no witty reason why I picked this beer for the bye week. I chose it simply because I love the beer and it has been my go to drink for the past month. Spanish for "the Gunitas", this is a beer that was introduced to me by family who live out in California and swear by the beer. I hadn't been able to find it in local "packies" until recently, but I find it everywhere now, from bars to liquor stores. If you like an IPA, but find some to be too hoppy, then this is the beer for you. It has just the right amount of hops, but an unbelievable flavor that isn't bitter and actually really smooth.

It is such an unbelievable beer, with great flavor that you could drink a few of these all day long as you sit in front of your television watching other college football games.

CAW CAW! IT'S TIME FOR EVERYONE'S FAVORITEST BOSTONS COLLEGE BIRD, BAWDWIN JUNYOR! I JUST FLEW BACK FROM CALIFORNIA AND BOY ARE MY WINGS TIRED. CAW CAW! THIS HAS BEEN A VERRY VERRY TOUGH WEEK FOR BAWDWIN JUNYOR, SPECIALLY AFTER THE LOSS TO SOUTHERNEST CAL. WHEN I GOTS BACK TO BOSTON, COACH DAZZIO CALLED ME INTO HIS OFFICE AND SAID "MR. JUNYOR STAND RIGHT THERE." SO I DIDS. AND YOU KNOW WHAT HE DIDS? COACH DAZZIO HIT ME OVERS AND OVERS AGAIN. HE MUST HAVE THOUGHT BAWDWIN JUNYOR WAS A PUNCHING BAG! I IZ NOT! I AM AMERICAS FAVORITE INFLATABLE MASCOT!

WELL AFTER COACH BROWN SEWED UPS BAWDWIN JUNYORS WOUNDS, I WAS READY FOR MORE ACTION! I RAN AS FAST AS MY INFLATABLE CLAWS COULD RUNS TO ALUMNUS STADIUM, AND GOT READY FOR THIS WEEKS GAME! BUT AFTER FOUR HOURS OF STANDING ON MY HEAD I WAS TOLD BY BRADLEY BEATS THAT THERE WAS NO GAME THIS WEEK AND I SHOULD FIND SOMETHING ELSE TO DO. SO I AM HEADING TO THE MODS! PARTEE PARTEE PARTEE! WHERE IS THE BEERS? I AM READY TO BEAT ANY BOSTONS COLLEGE STUDENT WHO THINKS THEY CAN DO A KEGS STAND BETTER THAN BALDWIN JUNYOR. WHO IS GOING TO BRING IT? CAW CAW!!

Gametime Song of the Week - Get By by Talib Kweli

Now I don't know if Kweli is considered old school, but I remember seeing him at BC back in 2005, which was an amazing concert seen by few.  Considered a conscious rapper, Kweli has some of the most insightful raps in the past decade, and with Kanye West supplying the beat, this song has stood the test of time. I picked this song, because I think it should be the theme for the next three weeks.  While Kweli is inferring that people are struggling to "just get by", I am going to build on that and say that BC is going to need to just survive the next three weeks in one piece to get ready for the end of the season. Just like life, it's going to be really tough, and FSU and Clemson are going to bring it, but Addazio has brought a tough mentality to this program, and they are going to need it for the second half of their schedule.

Brian - Out on the West Coast, watching Stanford football.
Jeff - In SEC Country, Clemson fans have started tailgating for the BC game right?
Conrad -  Partying with Baldwin Junior in the Mods.
Grant & Joe - Furiously writing BC Hockey previews and cleaning their tear stains out of their gold BC hockey sweaters.
A.J - Literally watching any football game on TV, because he remembers what it feels like when football goes away.
New Guy - Watching UMass football? Who knows.

BC Interruption writers had a rough Week 3, with four of the writers picking Boston College, while Dan, Brian and myself selected USC. This was the first real week where there was a real split in the picks. Dan currently has a sizable lead of four points over Brian, The New Guy has been dominant so far this season racking in 2 1st place finishes and a second place. Will anyone every over take him?

This is a perfect time to show off your BC pictures from the first three games. Show off your maroon and gold greatness on our Facebook page!

What grade would you give BC's offense and defense the first quarter of the season? What about the progress of the team as a whole? What are your expectations and predictions for the end of the season? What games are you looking forward to this weekend?