Should Thatcher Demko start the season between the pipes? And which Hockey East coach could take down a moose with a bow and arrow?

Continuing on from yesterday's part 1...

Joseph Gravellese: In other coaching news, Mike Ayers will be coming over from the USNTDP as an assistant for BC. That's a very nice addition to the staff for the Eagles.

Grant Salzano: Definitely, having those national team connections is always a good thing.

I wonder what that means for Thatcher Demko -- you'd have to think that gives him a little more of a chance of being the full-time starter out of the gate, seeing as how he's already got a close relationship with the goalie coach.

JG: That's what I'm thinking, too. He'll be working with someone he's already used to. And by all accounts, he has the talent to step in and compete for the starting job on day 1.

GS: I'm on the bandwagon until proven otherwise. The dude (choice of word intentional) has already shown he can win games against D-1 competition and he hasn't even set a skate on the Conte Forum ice.

JG: Speaking of Demko -- and recruiting connections with the national team -- Demko, Ian McCoshen, and Steve Santini are in action at the world juniors evaluation camp currently ongoing, and all three made it through Tuesday's first round of cuts.

You don't read anything into Demko getting beaten by Sweden and Finland, right? If anything, the fact that he started two games at this camp already as an 18 year old shows how much of a top prospect he is.

GS: We're having it both ways here, I know, but it doesn't bother me that he lost a couple games. Like you said, he is starting for the USA junior team.

JG: Also related to the junior team, and to the beloved LOL Northeastern topic... Jon Gillies looks like the #1 starter for 'Merica at World Juniors this season.

Look out for PC this year.

JG: He's going to be a B1G (if true) factor for Providence this year, something we can get into in depth in a few weeks when we start doing our predictions and team previews.

What else has happened this summer? Conte got air conditioning. That was nice. Ben Smith won a ring, but that sucked for me. Hockey East approved the dumpster-fire new playoff format; boo-hiss.

GS: At this point I can't get upset with anything crappy that Hockey East does, because everything, beginning with the addition of UConn, has been merely a domino from the fallout from adding Notre Dame to the conference.

JG: Well, I don't like it. Top 8/11 would have been a perfectly fine playoff format. As would have top 8/12. But whatever; drop the puck.

We have some weird non-conference games this year in the first season of increased out of conference play. Army, Holy Cross, RPI. Not exactly the titans we were looking forward to, but I'm at least a little bit excited for the HC and RPI games.

GS: We have plenty of titans. There are only so many titans.

In fact I'm pretty sure there weren't any titans left to schedule.

We need to go all-out on the Holy Cross trolling when they come to town.

The most interesting addition to the schedule since the end of the season was the inclusion of a trip to Penn State on January 25. A road trip which I will almost certainly make, by the way. That will be fun.

GS: Definitely a good road trip. Which is why I don't mind that game on the schedule. Like I said, there are only so many Biggums out there for us to schedule.

JG: That's probably the best road trip to look forward to this year, aside from the awesomeness of travelling to Minnesota, which isn't in the cards for me this time. Our holiday tournament in Pittsburgh is pretty lame.

JG: Nope, it's in Philly this year. I know Yale-Quinnipiac made it seem like it didn't happen, but Pittsburgh was last season.

GS: Well, whatever. I knew that though. Really I did.

JG: Here's another topic from the summer: I think Denver, Maine and BU all made really good coaching moves... none of them whiffed on this one and all three programs should be in good position going forward.

As for Maine's hire of Red Gendron, I just love that Maine's coach is named "Red Gendron" and he looks like this: 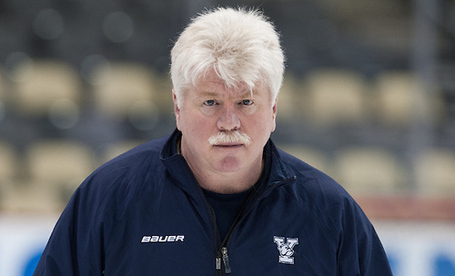 Put some flannel on that man and he's a perfect Oronite.

GS: Is that Kevin Gilbride 75 years ago?

Knowing nothing about the man, I'm guessing Red can take down a moose with a bow and arrow. Just a guess.

He'll do good things at Maine. Hockey East is getting more and more stacked at the top.

GS: Yeah, it's getting crowded, especially with Notre Dame joining and the emergence of Lowell (who, AGAIN, didn't lose all that much this year).

JG: A couple other tidbits from the summer:

Alex Carpenter made it onto the preliminary USA women's hockey roster for the 2014 Olympics. Congratulations to her, but GAHHHHHHHHH!

GS: Good for USA, bad for BC. Why is it that every single freaking year we enter with the exact same 4th-5th place expectations?

JG: Canisius is moving into a shiny new arena in downtown Buffalo. Whichever commenter it was that ragged on us for not showing proper respect to Canisius in our NCAA tournament preview, sorry about that. They'll now have a pretty sweet facility to play in going forward.

GS: LOL I reserve the right to show no respect to Canisius, thanks.

But yay for new arenas. I can't wait to see Notre Dame's eventually. That place is a jewel.

JG: Alabama-Huntsville gets ready for life in an actual D-1 conference, as they'll be in the WCHA this year -- and I couldn't be happier for them. They play at Northeastern on the second weekend in October and I may need to attend one of those games.

GS: BUT THE TRAVEL COSTS!

GS: That's great. Throw them right into the fire. They'll come out of it better players.

JG: That'll be all for this week. We'll be back next week to delve a little more into some storylines for 2013-2014. It's coming soon, you guys.