College Football Betting Picks, Week 1: The Battle Of The Carolinas and Other Picks

Pick 5 is back for a sixth straight season.

Share All sharing options for: College Football Betting Picks, Week 1: The Battle Of The Carolinas and Other Picks

Welcome back to another year of BC Interruption's Pick 5. At the start of our sixth season picking college football games against the spread, Jeff holds just a one-game lead over me, 183-172 to 182-173.

For those of you that are new or just need a refresher, ground rules:

-- Both Jeff and I pick five games each week against the spread. The previous week's winner has choice of games for the week. Though I won last year's contest by four games -- 37-33 to 33-37 -- Jeff has first pick this week.
-- Neither of us can take the same line on a single game. If one is willing to roll the dice, the opposite line on the same game can be taken. The end result is that the previous week's winner usually takes BC to cover. And loses.
-- Eagle in Atlanta usually chimes in in the comments section with his LOCK OF THE WEEK kiss of death.
-- You tell us how wrong we are in the comments section.

On to the picks.

North Carolina Tar Heels (+12) at South Carolina Gamecocks - UNC is one of the better teams in the ACC and South Carolina has questions on offense. Mistakes by the Gamecocks will leave UNC with some short fields so they can lose by less than 12.

UMass Minutemen at Wisconsin Badgers (-44.5) - Wisconsin will be looking for style points against UMass and should have no problem getting them. UMass is one of the worst FBS teams in the country and Wisconsin always plays well at home.

Penn St. Nittany Lions (-8) vs. Syracuse Orange - The last time Syracuse played a neutral site game early in the season they were embarrassed and this season will probably be no different. Under Coach O'Brien in his first year last year, Penn State got off to a slow start. This season they will start off the way they should having had a much less media filled off-season.

Kentucky Wildcats vs. Western Kentucky Hilltoppers (+5) - Kentucky has everything to lose and WKU everything to gain in this matchup. The SEC team is supposed to win but it won't happen. WKU has managed to build a decent program in less than a decade competing at the FBS level and will get the small upset over the Wildcats. 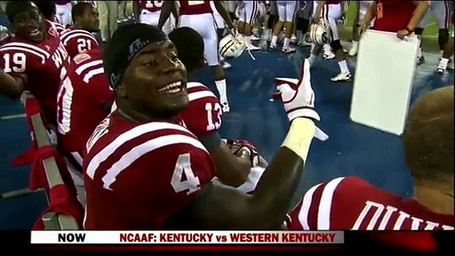 Washington St. Cougars at Auburn Tigers (-16) - Auburn shows they are back on the college football map with an easy home victory over a PAC 12 team to start off the season. The Auburn offense will look good and the defense will do enough to get a 3 TD victory over lowly WSU.

Purdue Boilermakers at Cincinnati Bearcats (-10 1/2) - Both these programs will be breaking in first year coaches, though Butch Jones leaves the Bearcats in a much better position than the deposed Danny Hope at Purdue. One program is expected to vie for the American title while the other is expected to finish towards the bottom of whatever Big Ten division the Boilers are in. Like Cincinnati by a couple of TDs here.

Fla. International Golden Panthers (+23) at Maryland Terrapins - This line has gone from +15 to +23 as several Golden Panthers will likely not travel to College Park for this weekend's opener against the Terps. That includes junior cornerback Richard Leonard, who would've been somewhat useful in defending against WR Stefon Diggs. Maryland is finally healthy, particularly at QB, but I'll believe the Terps' supposed "high powered offense" when I see it. Despite playing QB at Syracuse, Edsall has never been known for his offenses. Despite dipping into 4th and 5th string QBs last season, Maryland finished 123rd in total offense (ahead of only hapless UMass).

Louisiana Tech Bulldogs (+13 1/2) at N.C. State Wolfpack - Sonny Dykes is no longer in Ruston, and the personnel has turned over dramatically on the Bulldogs potent offense. Still, I don't expect Louisiana Tech to take that big of a step backwards on offense. N.C. State also features a first year head coach in Dave Doeren. There's some talent in Raleigh for N.C. State to finish as the best of the NOT Clemson / Florida State programs in the Atlantic Division, but the season gets off to a slow start with a close W over the Bulldogs.

BYU Cougars (-1) at Virginia Cavaliers - Noticing a pattern here? I'm not sold on the bottom half of the ACC this season. BYU is breaking in two new coordinators and moving to a more hurry up, spread offense, so there's bound to be some growing pains along the way, but I'm not buying UVa as any good this year. I see 2011 as more of an outlier than any sort of positive trend for the Cavaliers and think Mike London (and TOB's?) days are numbered in Charlottesville.

Boise St. Broncos (+3 1/2) at Washington Huskies - Boise State's Chris Petersen is 84-8 (!) at the helm of the Broncos. I see the Broncos coming into Seattle and spoiling Washington's first game in the newly renovated Husky Stadium. This is a rematch of last season's Las Vegas Bowl in which Boise State eked out a 28-26 win.