One man stands above the rest in picking Boston College to finish ... fourth in the Atlantic Division.

Share All sharing options for: Boston College Football Has A Believer In CBS Sports' Jerry Hinnen

Not surprisingly, expectations are low for a college football program coming off a 2-10 season. Nearly every college football prognosticator has the Eagles at or near the bottom of the ACC's Atlantic Division in 2013. However, one courageous CBSSports.com prognosticator is willing to go out on a limb and risk everything to predict that the Boston College Eagles to finish ... 4th ... in the Atlantic this season.

Today, we salute you, Jerry Hinnen. 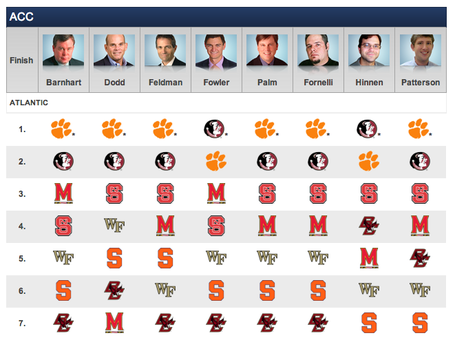 CBSSports.com's Eye on College Football staff writers predicted the order of finish for every conference in the nation. The consensus is that Clemson and Florida State will finish 1-2 in the Atlantic Division, with only Jeremy Fowler and Jerry Hinnen picking the Seminoles over the Tigers.

The rest of the division is a jumbled mess. With a bunch of near indistinguishable programs not named Clemson or Florida State, the rest of the division picks are all over the place. N.C. State appears to be the consensus pick to finish third, which I don't get, though I suppose someone has to finish third. Maryland in fourth, followed by Wake Forest, Syracuse and Boston College.

But Mr. Hinnen stands alone in expecting big things from the Eagles in 2013. And when I say big things, I mean not last. In order to meet Hinnen's expectations, have to think BC will need to beat the teams predicted to finish below them in the division -- Maryland, Wake Forest and Syracuse -- and maybe steal even steal a game against N.C. State.

It's a bold pick when factoring in the cross-division schedule of the NOT Clemson / Florida State teams in the Atlantic. The Eagles have arguably the toughest slate of any of the other five programs, facing Virginia Tech and North Carolina from the Coastal Division. Both programs are expected to vie for the Coastal Division title in 2013.

When compared to the rest of the Atlantic Division's cross-division slate ...

... BC seemingly drew the short end of the stick here. Yet, hope remains that the Eagles are a veteran enough squad that they can make some noise in the Atlantic Division this season. With home games against N.C. State and Wake Forest (Friday night, national TV), I expect BC to end up pulling out a few wins in conference -- enough that a return to a bowl game isn't beyond the realm of possibility.

In the Coastal, the CBSSports.com staff picked Miami to win the division (in all but one ballot, again Mr. Hinnen). Stop me if you've heard this before. Virginia Tech is on four of seven ballots to place second, followed by North Carolina, Georgia Tech, Pittsburgh, Virginia and Duke.

Effusive praise and gifts of thanks can be directed at @JerryHinnen. Boston College won't let you down, sir.

Also, I see you Dennis Dodd.