For part two of our thoughts on EA Sports "Keeping it real" with NCAA 14, I wanted to take a closer look at Boston College's game roster.

Here are the Eagles' top 10 players in the game (via xboxfiends YouTube): 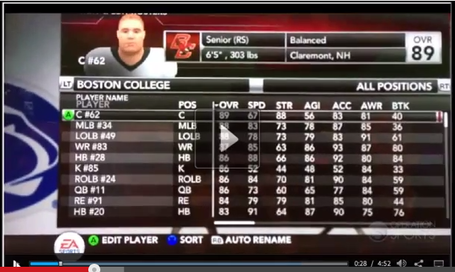 1. C #62, Ian White clone (89 ovr) - A bit surprised that an offensive lineman is Boston College's top player, especially given the disastrous year the Eagles had in the trenches. What this speaks more to is what BC's line looked like without White in the lineup. The 6-foot-5, 303 pound right guard is poised to take a leadership role on the O-line going into his senior year in hopes of rebuilding the program formerly known as O-Line U. And if that moniker should tick you off, good. It's no coincidence that BC's new head coach was a former offensive linemen. The rebuilding effort has to start in the trenches, and White will play an integral role in that effort. Eagles fans will be hoping White can return to form after missing the final three games of the season to injury.

2. MLB #34, Sean Duggan clone (88) - Duggan here surprises me. There's a ton of talent in the linebacking corps -- starting with Divitto (below) and KPL -- so Duggan doesn't strike me as the second best player on the team. That's less a knock on the St. X backer and more a compliment to Divitto and KPL. Still, Duggan will have some big shoes to fill as he's set to take over for KPL on the weakside.

3. LOLB #49, Steele Divitto clone (88) - One of two frontrunners for BC's All Name team, the Don Bosco senior is one of the few legit stars on the defensive side of the ball. The Butkus Award watch list candidate will represent the Eagles at the ACC's Football Kickoff down in Greensboro, N.C. this weekend. With Clancy graduating, Divitto is poised to become the next BC backer to rack up an insane amount of tackles in a season -- joining Nick Clancy, Luke Kuechly and Mark Herzlich.

4. WR #83, Alex Amidon clone (87) - On a unit short on star power, Amidon was a star in 2012. The rising senior established single-season school records for receptions (78) and receiving yards (1,210) last season and was the main target for Rettig. While Amidon is unlikely to match last year's output, he's a fine #1 receiver and will be looked toward to carry much of the workload on offense. Particularly with a startling lack of depth in the backfield.

6. K #85, Nate Freese clone (86) - When the fifth highest rated player on your video game college football team is a kicker <<. Still, Freese is one of the most accomplished and accurate placekickers in Boston College history, and his efforts were recognized with a spot on the preseason Lou Groza Award watch list. Freese shook off a sophomore slump (10-of-16 FG, 26-of-27 XP) in 2011 to finish 18-of-20 FG and a perfect 24-of-24 XP last season.

7. ROLB #24, Kevin Pierre-Louis clone (86) - KPL and fellow backer Steele Divitto are poised to be two of the biggest beneficiaries of the program's top offseason pickup -- defensive coordinator Don Brown. Brown's aggressive schemes should sufficiently showcase both KPL's and Divitto talents in the middle. Who knows? Maybe KPL will improve on his team-high 2 sack total in 2013. That's not a typo. Just two, or 1/3 of all team sacks in 2012.

8. QB #11, Chase Rettig clone (86) - The Rettig clone checks in at number 8 on this list (really, seventh with Finch gone). While this may be surprising to some, it's really shouldn't be. If the 2012 football season taught us anything, it's that Rettig can't do everything by himself. With a non-existent run game and a porous offensive line, Rettig seemingly regressed throughout the year. How much of that regression is on him vs. the supporting cast is an issue up for debate. What isn't up for debate is the fact that Rettig has a ton of natural ability, but without the other aspects of the offense clicking, it's hard to see everything finally clicking for the senior signal caller.

9. RE #91, Kasim Edebali clone (84) - Edebali led the defensive front four last season, starting in 11 games and leading the team in TFLs (7.5) and finishing second in sacks (1.5). The Germany product is the best player on a pretty average unit. The lack of depth in the front four is startling, really.

It's not a stretch to say that both the Boston College offense and defense struggled mightily in 2012. There seems to be more upside on the D this season, reflected in EA Sports rating three BC linebackers among the top six players in the game. Have to think that this team's top 10 players will look very different at season's end though, with players like Andre Williams, Al Louie-Jean, Sean Sylvia and a receiver like Marcus Grant or Spiffy Evans having a breakthrough year and cracking the top 10.

Your thoughts on EA Sports' player ratings for Boston College? Which players should be ranked higher? Which ones are misses?