The Eagles athletics department looking at its worst finish in the Director's Cup since 1995-96.

A little over a week ago, the NACDA released the next-to-last Director's Cup standings. These standings don't take into account the college baseball season which, well, let's just say Boston College won't be getting a boost in the standings from this year's baseball program.

Since BC isn't picking up any more points from baseball, the department is looking at its worse finish in the final standings since 1995-96, the third year of the Director's Cup. 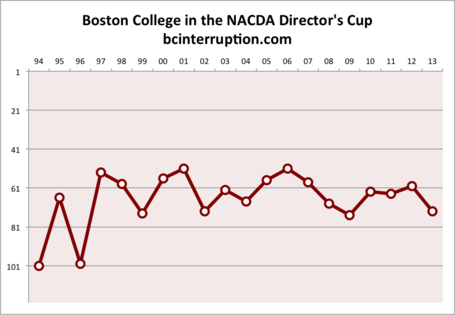 The school's average finish in the 19 year history of the Director's Cup is 66, so this year's finish will be well below that average.

A glaring weakness of the BC athletics department in the Director's Cup is a lack of success during the spring sports season. There are a possible 13 sports that can be scored during the spring season and BC rarely places in any of them.

It's not a surprise that BC doesn't fare well during the spring season with a mix of sports not offered (men's lacrosse, men's volleyball, women's water polo), not fully funded / supported (men's tennis, baseball) or not sanctioned by the NCAA (sailing). That said, if strong finishes in the Director's Cup are a goal of the new administration, the spring season should definitely be an area of focus on where Boston College's varsity programs can improve.