Share All sharing options for: F/+ in the ACC: Boston College Football's Fall Swift And Painful

Football Study Hall recently examined the F/+ ratings for each of the major conferences, taking a tour of the ACC. The full article is definitely worth a read, but may I draw your attention to the relevant graphic for Boston College. 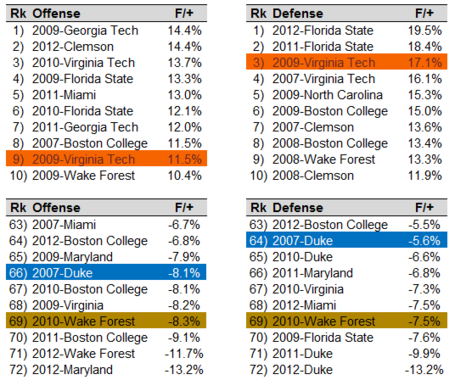 That would be the best and worst offenses and defenses in the ACC during the last six years. Note that BC shows up in each of the four charts, which is a damn impressive feat when you consider the short time window. To recap, that's:

The Eagles and Demon Deacons are the only program in the conference to appear in each of the four charts, but BC shows up seven times to Wake Forest's four appearances. This is clearly not new news, but it does illustrate just how far the Eagles football program has fallen off on both sides of the ball. Of 72 individual offenses over the six year span, Boston College's last three years have been among the 10 worst in the conference. That's a mark of futility only bested by Duke's defense (four bottom 10 finishes in six years); seemingly worse when you consider that BC's offense was one of the ACC's best in 2007.

The D hasn't fallen off as dramatically, but this was also the Eagles' more dominant unit with two top 10 finishes in six years (2008, 2009).

The good news here, if there is any, is that new defensive coordinator Don Brown has managed to transform his defenses to elite units at both of his previous stops -- Connecticut and Maryland. It seems as though the recovery on the defensive side of the ball will be easier than on offense (aside from the fact that BC's offenses have been very average over the years, 2007 excepted).

The bad is that success on one side of the ball has not guaranteed success in the conference over the last few years. Of the top 10 offenses over the last six seasons, only four managed to win their respective division. Just two -- 2009 Georgia Tech and 2010 Virginia Tech -- managed to win the league title. The other side of the ball paints a similar picture. Just three top 10 defenses -- 2012 Florida State, 2007 Virginia Tech and 2008 Boston College -- made the ACC Championship Game, with two taking home the title.

Probably most damning of all is the fact that no ACC program over the last decade has managed to dominate both sides of the ball. No program has won their respective division while having both a top 10 offense and defense over the last six seasons, unlike, say, the Big 12. The 2009 Virginia Tech team was the only team to have finished in the top 10 in offense and defense during the years studied, but the Hokies were edged in the Coastal Division by Georgia Tech. It's the lack of a dominant program that has no doubt contributed to the ACC's perceived lack of success over the last few years.