More Details On The ACC's Grant Of Rights

Share All sharing options for: More Details On The ACC's Grant Of Rights

CBS Sports' Jeremy Fowler has more details on the ACC's recently announced grant of rights. Let's get to it:

-- Starting July 1, the ACC's annual media rights intake per school will surpass $20 million, according to a league source. That's not Big Ten money but it's certainly starting to close the gap with the other power conferences.

--There is a relationship between the announcement of the GOR and the ACC's push for a 24-hour channel not unlike the Big Ten, SEC or Pac-12's TV networks. The league is still evaluating whether this makes sense, but if the ACC was able to start its own TV network, that would go even further to putting the conference on par with the rest of the power conferences.

-- Despite Twitter speculation to the contrary, the announcement of the league's GOR probably has no bearing on the ongoing litigation between the ACC and the University of Maryland. 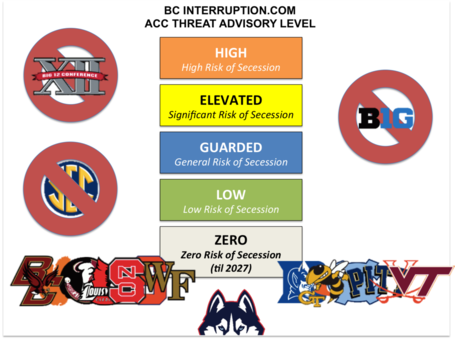