Steve Addazio is in control, let's see what he has in store for us this fall.

We are back with a special edition of the Football Final Thoughts series you will see all season long at BC Interruption. What a difference a year makes. Last year at this time we were looking down the barrel of another season of Frank Spaziani, expectations were at an all time low, and recruiting was down. The Jay McGillis Spring Game's attendance was a joke, and the season went down from there. Now BC has a new AD with Brad Bates, a new head coach Steve Addazio and recruiting is heading in the right direction. Saturday will be the first chance to witness the Steve Addazio Experience.

Will the fans/students show up to this game as a way to rally behind the city of Boston? What major recruits will be in attendance for the game? Is the format of the game going to be the same convoluted system from past years? How will Ryan Day change up the offense? Will we actually finally see sets with aggressive corner back play? Will the change in offensive line play be noticeable already?

What quarterback will be backing up Chase Rettig this season? Does Addazio plan on using Josh Bordner in some sets on Saturday? Someone on this defense is going to need to apply pressure this year, will we see glimpses of this on Saturday? Will this weekend result in a windfall of commitments?

What To Drink "For Boston": 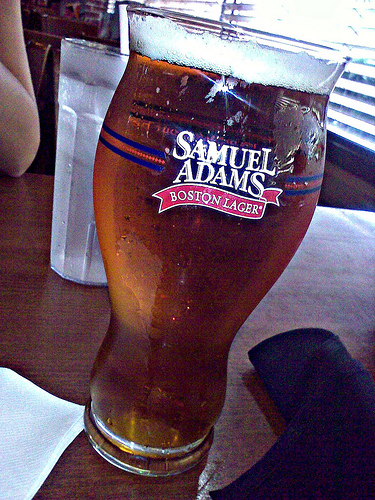 Samuel Adams Boston Lager. The beer of the masses in Boston. Sure I could have picked a smaller brewery like Wachusett or Sam's biggest competitor Harpoon, but honestly is there a more Boston beer than this? Named after one of the most bad ass patriots in history, Sam Adams is the beer you can find in any bar. And it's not bad. So this weekend, when you return to the city that you love, the city that gave you so much, drink a Sam Adams. For Boston.

CAW CAW BAWDWIN JUNYOR IZ BACK FOR ANOTHER SEASON OF MY CRAZEE ANTICS. FOR ME ITS BEEN A BERRY BERRY LONELY WINTER. I MISS MY BESTEST BUDDIES GENE AND FRANK SPAZIAMIANI HAVE LEFT ME ALL ALONES AND THE NEW DOOD DAZZIO IS TOO SPENDS ALL HIS TIMES GETTING HIGHSCHOOLERS TO BECOM EAGLES. AND WORSTEST OF ALL? HE MAKES BAWDWIN JUNYOR RUN SPRINTS AND DRILLS UNTIL BALDWINS LEGS DEFLATE. BUT I AM MOSTEST EXCITED ABOUT THIS WEEKEND, BECAUSE WE KNOWS BC IS GOING TO WINS! CAW CAW!!

For Boston. During this tough period in our history, this song has been a solace to me. Just listening to it helps me remember everything I love about this city, and those memories and the memories to come are not something some sick bastard can take from us. We as a city, as a community are too strong for that. For here all one indeed.

BCI Reasons You Should Attend The Spring Game:

1. Just another excuse to be on the campus of the school you love.
2. You don't get another chance to see live football until August 31st.
3. There are going to be some major recruits on campus, don't you want to show them why Boston College's community and fan base kicks ass?
4. There is a new sheriff in town, one that actually cares if you come to the game. I bet Addazio has some surprises in store for the day.
5. We can haz spring tailgating?
6. After Monday's tragedy, it could be healing to be with a community you care about in a city that needs you.
7. Mark Herzlich will be on campus playing in the flag football game, do you dare disappoint him?

Last game of the season, make sure you let the coach knows how you feel on our Facebook page!

The final game of the season. Watching the game? Given up? Leave your thoughts in the comments! Go Eagles!