Can you believe it is finally here? Boston College is in a bowl game again, just one year removed from finishing 2-10, the Eagles went 7-5 and are ready to face off with the Arizona Wildcats. They have had over a month to prepare for this game, and ten extra practices, but what will Boston College need to do to beat the heavily favored Arizona squad. One more chance to see some Steve Addazio magic, one more chance for Andre Williams to impress us all with one more incredible performance, one more chance for Boston College to regain what they have lacked for the last four years.

Obviously the biggest question is who will finish with more yards, Andre Williams or Ka'deem Carey? Can BC's defense contain Carey? How is Andre Williams' shoulder? What kind of game can we expect from Chase Rettig? Will Nate Freese continue to remain perfect? How will the offensive line manage against a team that only had 20 sacks all season? How will BC be able to contain both Carey and dual threat quarterback B.J. Denker? Will one of the wide receivers not named Alex Amidon make a play this week? Will the full backs show up in the passing game again? Will Arizona conveniently forget about Alex Amidon and allow him to make a big play or two?

Will the time off effect Boston College negatively or help them? Or some combination of both? How filled will the stadium be tomorrow? What Arizona team will show up tomorrow, the team that beat Oregon or the team that got blown out by Arizona St? Can BC play another clean game without major penalties. Will Don Brown's defense be able to get off the field on third down? 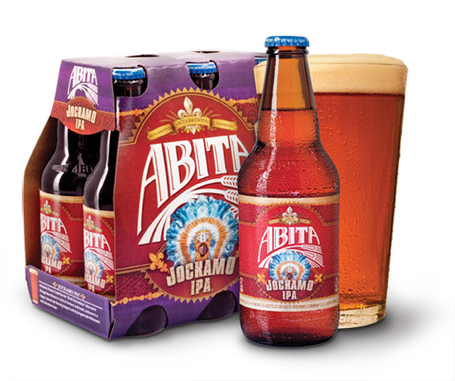 Jockamo IPA by Abita Beer: Had to go ahead and choose a beer that was brewed in Louisiana because I just assume that everyone in Arizona only drinks Tequila and Margaritas (This is a joke, please don't send me a million beers brewed in Arizona, because honestly I don't care). I tried Abita at a Beer Fest before and was pleasantly surprised by a beer that has such an odd name. It was rich, had a malty-caramel flavor and really was refreshing, and as an IPA hop-head I would highly recommend this. Hopefully you can find this beer at your local packie, because it's worth a drink.

Hell you know what? Drink whatever you want. Boston College is in a bowl game, and this has been a season none of expected. Enjoy this while it lasts. Leave your beer choice in the comment section.

CAW CAW!!!!!! I I'Z A SADS BYRD, I HURD THAT SOME OF YOU REEDERS OF THE BC INTERRUPTUS DON'T LIKE THE BAWDWIN JUNYOR AND SOME OF YOU WISHED HARMS ONTO ME! IM GOING TO GO INTO A CORNER AND CRYS FOR A BIT...WAIT A MINUTES WHY WAS I CRYING? I SHOULDNTS BE SAD, ITS BOWLY TIME!

I AM SO EXCITED THAT WE GETS TO PLAY THE BEARCATS OF ARY-ZONA, THAT I RAN IMMEDIATELY OUT THE DOORS AND HEADED TO MY LOCAL AIRPORT (BAWDWIN JUNYORS CANTS FLY, DUH). I CANTS SEEM TO FIND COACH DAZZIO AND THE TEAM, BUT I AM SURE THEY WILL BE HERES SOON! THEY ARE THE DOODS AND THEYS LIKE TO MAKE A GOOD ENTRANCE! I AM IN TUCSON READY TO WATCH THE GAME. HERE IS MY KEYS TO THE GAME.

I HAVE ALL THE FAITHS IN THE WORLD THAT WE IZ GOING TO WIN THIS GAME. I PRACTICED GETTING READY FOR THIS GAME BY FOLLOWING MY FAVORITE SPORTY CASTERS. SO I SAT DOWN WITH PLAYERS THIS WEEK AND TALKED TO THEM. ANDREW WILLIAMS TOLD ME THAT HE IS GOING TO RUN OVER EVERYONES! HE HAS SPENTS THE LAST MONTH USING HIS GOOD SHOULDER TO RUN OVER BAWDWIN JUNYOR, SO I AM SURE THAT HE IS READY TO ROLLL! COACH DAZZIO IS PREPARED AS WELL. HE TOLDS ME THAT HE HAS BEEN UP ALL WEEKS WATCHING GAME FLIMS AND PUMPING IRON. HE SEEMS MAD. GRRRRRRR. STAY OUT OF HIS WAY. CASEY EDEBALI AND CHASED RETTIG ARE BOTH SUPER DUPER JACKED UP AS WELL. THEY TOLD BAWDWIN JUNYOR THAT THEY ARE READY TO WIN THIS GAME. WOW, I SHOULD BE AN ANNOUNCER FOR THE NFL, LOOK OUT PHIL SIMMS, BAWDWIN JUNYOR IS GOING TO TAKE YOUR JOB! I CANTS WAIT FOR THIS GAME! GET READY FOR A BLOODY BATH! CAW CAW

Make'em Say UH!- Master P and the No Limit Soldiers

Part of me wanted to go with Lil Wayne (product of New Orleans) or Lil Boosie who wrote a song called I.N.D.E.P.E.D.E.N.T which would have been fitting (but the song blows). So I chose another Louisiana favorite, Master P and the No Limit Soldiers. Easily my favorite part of this video is the giant gold tank they drive onto the basketball court, followed secondly by Mystical. But honestly I love everything he does, well other than the whole going to jail thing. Master P was not much of a rapper in my eyes, and I honestly didn't like much of his crew's music, but this track still does it for me. Hopefully BC will make Arizona say UGHHHHHHHHHHHH tomorrow.

Watching this game here is a fun way to make it a little more fun. Just get a bunch of your friends together and prepare for some debauchery:

-- Every time the announcers mention Andre Williams highlight runs Drink One
-- Every time they compare him to Ka'deem Carey Drink Two
-- Every time the announcers mention Andre Williams and Heisman Drink Three
-- Every time Addazio is shown screaming Drink One
-- If Addazio screws up the two minute drill Drink Three
-- Go on to the BCI comment section, if commenters are needlessly screaming at Addazio/Ryan Day, drink one for every comment
-- If Ka'Deem Carey breaks a tackleDrink One
-- If he breaks more than four tackles Finish Your Beer
-- If a BC corner trips defending a pass Drink One
-- If a BC corner trips and it causes a touchdown Drink Three
-- If Nate Freese nails a field goal Drink One
-- If Nate Freese hits a game winner slam a beer and run around your neighbor hood naked yelling WE-ARE-BC!
-- If Kasim Edebali gets a sack Drink One
-- If Don Brown's defense screws up a third down play, Just keep on drinking
-- If Boston College wins Crack a bottle of champagne and celebrate with friends
-- If Boston College loses Crack a bottle of whiskey with friends and mourn the end of the season

Going to make it to the bowl game? Going to see what's doin' in Shreveport? Want a picture of your tailgate or group of friends featured on next seasonsFinal Thoughts? Make sure to put up your photos on Facebook, or if you want you can email them directly to me at bchysteria at gmail dot com. Please make sure you understand that by emailing them to us you are giving us the right to use your picture on our posts!

Can Boston College deliver the knockout blow to the Wildcats? Or will they be unable to stop Ka'Deem Carey and the Arizona rushing attack. Make sure to leave your predictions in the comment section.